Last Wednesday I got my Kickstarter backed copy of Quartermaster General: 1914, the third QMG game, set in... wait for it... the First World War. The Kickstarter was headed by Plastic Soldier Company, who had already produced the game, but I guess were looking for funding to manufacture it.
The package arrived on Wednesday, but being away at work until Friday I wasn't able to get my grubby hands on it until last Saturday. The Kickstarter included a Britons Need You mousemat and a First World War aircraft recognition chart, both a bit superfluous to the actual game, but nice. Also there were some metal gaming pieces, which were a much better addition. 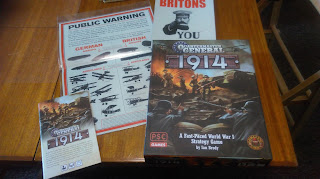 I had a chance to try it out with Dean who called over for a game. He took the Central Powers of Germany (grey pieces) and Austria-Hungary/Turkey (dark red/light red) and I had the Entente of Russia (white), France/Italy (dark blue/light blue) and United Kingdom/United States (brown/green). Each power has its own deck of cards, with some for the smaller states (Turkey, Italy, America), so you can build the armies and navies of those powers as well. The board starts off pretty sparse, with just a few pieces scattered across it, but that will soon change... (note the cups) 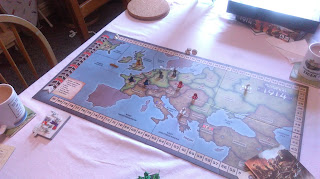 Each turn is divided into phases in which you can Draft a card from your draw deck, with which you are able to create an army or navy later in the turn. You then Play a card, such as an event, use economic warfare or build or battle with your armies and navies. A few turns in, the Austrians had begun spreading across the Balkans, whilst Britain pushed her navies out into the Mediterranean. At this stage Germany and France were both quite weak and had yet to begin expansion. 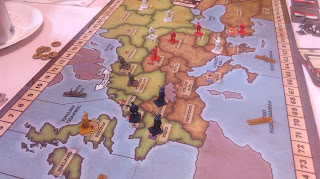 After the Play phase comes the Attrition phase, which strikes at your opponent's deck of cards and reduces them, limiting their abilities and eventually damaging their score. Then we have the Prepare phase, which is a very important aspect of the game. This involves you laying cards face down on the table that may be triggered by future events such as sustaining a land battle, or defending against attacks. This is where the beauty of the game lies and what makes it period-specific for the First World War. Operations on the Western Front were undertaken with a lot of preparation, the build up of material and men gave rise to the massive casualties. This is what comes to the fore in the preparation phase, for example, Britain wasn't able to launch a large offensive really until 1916, half-way through the war and playing as Britain it took me a long time to build up enough supply lines to even land troops in France before being able to attack Germany.But by then I had prepared several cards for the forthcoming offensive. 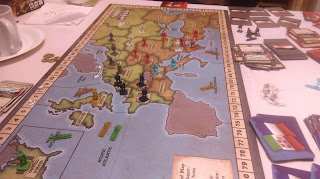 However, even with the help of the Americans in northern France, there were no less than three massive assaults on the German forces that proved fruitless. For all the prepared cards I was able to play against him, Dean's Germans had prepared defences to thwart my efforts. However, this was the point of the attritional aspect of the game. Every time I fought him, he was losing cards by playing them as defence. So, although I was not gaining ground, I was in fact, weakening his overall defences, just as happened to the German army in 1918 through years of attritional warfare. 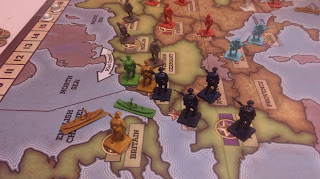 Another aspect that rung true from the real war was the destruction of Russia, I ran out of cards from their deck towards the end of the game which rendered them all but useless. My mistake was not really using the initial cards I had been dealt properly and hoping for build armies and battle cards, which didn't come. In future, I will use Russia to deal a blow to the Central Powers through economic warfare whilst I whittle away at Germany on the Western Front with France and Britain. In our game, the Germans reached and captured Moscow, but were being attacked on the Western Front and this is how the board looked on the final turn of the game: 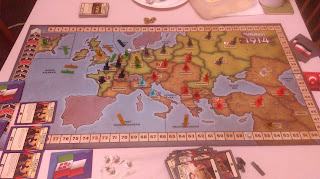 With the fall of Russia and failures on the Western Front, I lost the game 41 points to 57, a clear win for the Central Powers, but no less entertaining. There was a lot to think about and the first few moves saw us puzzling over just what was best for each of the powers, however, it didn't take long to get into our stride and remembering each phase became a lot easier. That is also about the time that the game 'clicked' with us and I regretted the fact I had spent a lot of time preparing cards that didn't really have much use in the end. It is one of those games that benefits from the players knowing the cards in their deck and how to capitalise on the ones they have in their hand.

As for period feel, this game has it in buckets. If you have played Quartermaster General then this is a slightly more rounded out version, and it feels as it is based on Operational level warfare rather than Strategic warfare (which QMG is). The key is to get a strategy early on and stick to it, make sure that all your preparations are aimed towards that goal. As I said, it felt correct for the period. If I had started my attacks on Germany sooner, I think I would have been able to swing the game more towards me, drilling down their cards and forcing them to remain on the back foot. Time will tell in another game, but for the first one, it was excellent.