Along with the other Blücher terrain that I have been making recently I decided that no 100 Days Campaign is complete without the addition of, surely, the two most famous farms in Belgium; Hougoumont and La Haye Sainte. As with my other Blücher terrain these are 2mm in scale, and are from Irregular Miniatures. Now, Irregular have a vast range, and some of their stuff is hit and miss. However, I saw pictures of these buildings on the internet and with the price being a few pounds I decided to give them a punt.

The service was quick and the buildings arrived and looked pretty good in the flesh. At this scale it's hard to get them wrong though. Anyway, I set about making the terrain tiles. I figures that the two farms were so pivotal in the Battle of Waterloo that they should both be classed as villages in their own right and should be based on a village sized base.

The first up was Hougoumont, here viewed from the direction of the French attack: 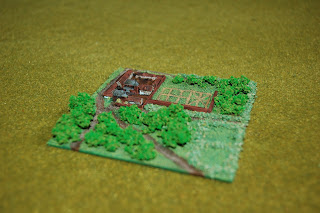 The actual surroundings of the farm are quite extensive and are bigger than the base would allow me to model, so I telescoped them down as much as possible to fit on the main features. These include the formal gardens, orchard and wood that the French attack progressed through. Research for the layout came mainly from Mark Adkin's The Waterloo Companion, and Charles Grant's Waterloo (Wargaming in History). Both of which differed slightly on the detail, but gave me a good idea of the layout of the farm and surrounds. 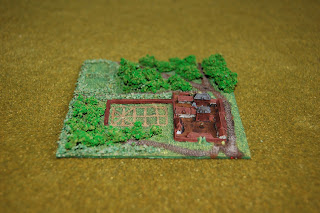 The other farm on the field of Waterloo was La Haye Sainte. Previously I had already made a 6mm sized La Haye Sainte, but this was too big for the Blücher urban tiles so I went for 2mm again. This is it looking from the south along the Brussels road. 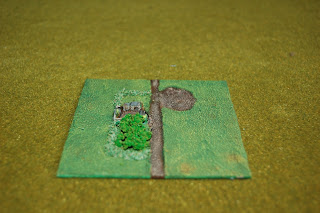 You can see the famous sandpit, defended by the 95th Rifles, and although the buildings are not laid out perfectly compared to the real farm, they look good enough for my purposes. 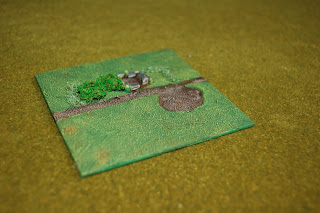 So there you have it, two more urban bases, both of which will take an infantry base to garrison and function just as they did in the real battle.