For my birthday in July, I treated myself to a box of Warlord's Mega-City Judges box set. Unfortunately, because of the house move they have been sat on the side waiting to be painted. However, I recently got the war room into some form of order and put up a painting table. I then wasted no time in getting the figures prepped for painting and on a free Saturday managed to paint four of them. Rather than re-inventing the wheel, I followed the guidelines from a BLOG I found that had good instructions on painting the figures. I wanted my Judges to emulate the comic art of 2000AD, so it was a perfect way of tackling my figures.

The first two are bog-standard street Judges, one with two Lawgiver pistols. 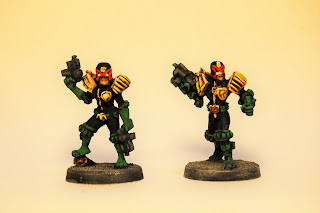 And from the rear. Obviously, Warlord had used a couple of different sculptors for these figures as the uniforms are not... ahem.. uniform. I've also noticed some discrepancies amongst their entire Judge range. I'll not loose sleep over it though, it's just a minor gripe. 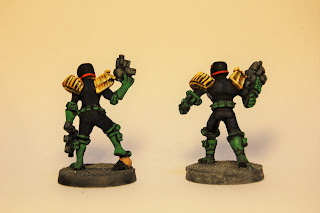 The two cadets are nice figures and will be very useful for training situation scenarios. 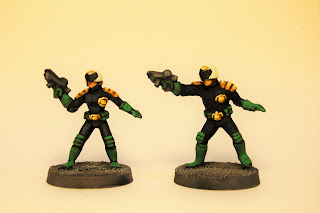 I copied the colours from the comics, everyone has their own interpretation on the Judge uniform and I am happy with how these turned out. 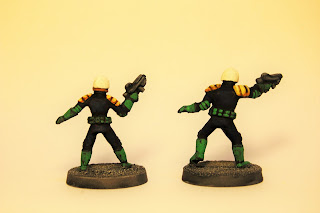 They were nice to paint, as there wasn't many colours, but the highlighting was fun and something that I rarely get to do with my usual scales of 6mm and 15mm. I am unsure what to do with their bases as they look a bit bare, but I don't want to cover them in rubble as Mega-City One is not in a continual state of destruction and Rockcrete is pretty sturdy stuff... It may just be a case of painting some white lines for street markings, but it's something I'll give more thought to.

In other news, I am selling a small collection of Wargames Illustrated from 2011 on EBay, there's eleven copies, please have a look HERE.