The Quest for the Golden McGuffin

On Sunday I met up with Ninjasaurus Rex for a game he has been working on in recent months. Inspired by Jason and the Argonauts, he has turned his attention to Classical Greece, but with all the fantasy elements of the quest for the golden fleece thrown in with a heavy nod to Ray Harryhausen. He has been painting some 28mm figures for the game and you can see more about them on his BLOG. There's no point me going over old ground. However, the game is a skirmish based on Warhammer Fantasy Battle Third Edition, which was probably the last good version of Warhammer before all the special sauce made it unplayable. The new version uses the same stats for armies as in WFB, there's no point reinventing the wheel. But, by amassing all the die rolls in to one (roll to hit, toughness versus strength, saving roll, etc) Warhammer becomes a bucket of dice game that is now fast play. In an attack, the attacking player takes the number of dice equal to the character's Weapon Skill and Weapon Strength along with any modifiers for charging, fighting uphill, etc. Meanwhile, the defender rolls a number of dice equal to the defender's Weapon Skill, Toughness and any armour bonuses. Sixes are wounds and each wound caused is paired off until one or the other has more, the resulting wounds are checked against the character's Wounds (usually 1) and any in excess kills the character. Pretty quick, pretty tidy and a lot less clunky than WFB...

Each figure has two basic actions per turn, these can be used to move or fire/throw a weapon. Hand to hand attacks occur automatically when figures come in base to base contact, but are a turn's full action if the figures begin their turn in hand to hand. So if you begin a turn in contact all you can do is fight or attempt to withdraw, which will allow for a second action if successful. There is also a chance to take a final third action as long as the figure passes a Leadership test.That's the basic rules, we added a couple of extra rules as we went and the whole thing needs a bit of fleshing out.

So this Sunday's game was a playtest of the core rules to see if they actually worked. It was to be a skirmish between Satyrs (him) attempting to gain the Golden McGuffin from the skeleton defenders (me). The Golden McGuffin was held in the temple in the centre of the board. 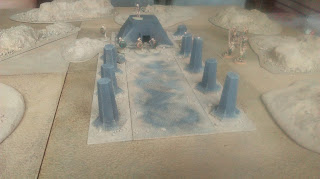 There were six Satyrs all armed with spears and one with a hunting horn. 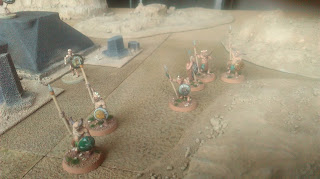 There were four skeletons initially, but more could be generated if any of the original defenders took a hit. 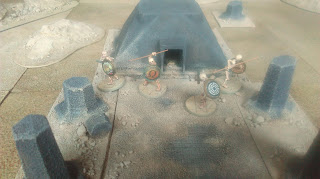 The skeletons began the game in the temple, whilst the Satyrs entered from the top of the board. The temple had to be entered via the door on the front and if any Satyr got in the game would end in their victory. 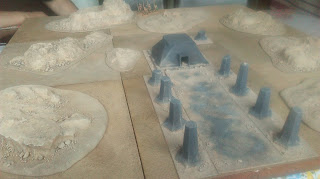 As the Satyrs advanced over the rough terrain, the skeletons were alerted to their presence and began to emerge from the gloomy temple. 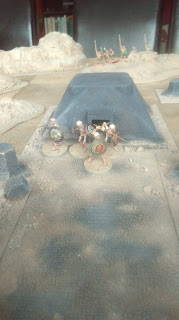 The Satyrs split their attack as they crested the rough ground. 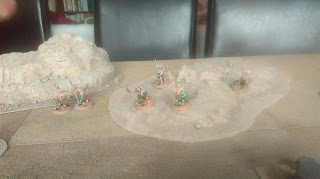 I thought the best way to stop the offensive was to bring the pain to the Satyrs and sent my four skeletons around each side of the temple, trying to head them off at the pass. 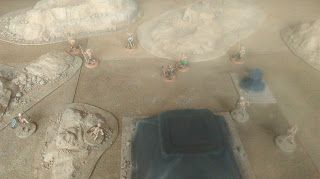 The two sword armed boneys rushed in to attack the Satyr horn player and another grunt. 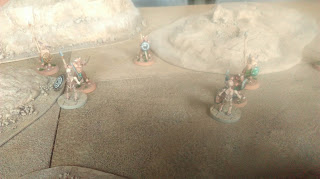 The horn playing Satyr failed his fear test and turned tail and fled, the skeleton got an attack in, but was unsuccessful. Not so in the other combat, where the Satyr was cut down by a sword blow. One hit, one kill. 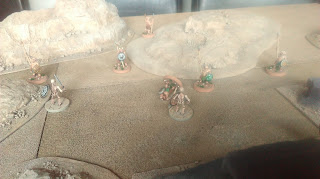 Then the other two skeletons threw their javelins and claimed a second Satyr. 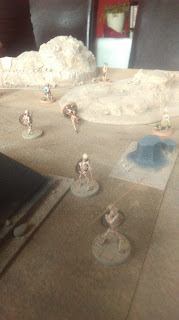 However, it wasn't all going my way, the Horn playing Satyr rallied and threw himself back at the skeleton who had shamed him. He was successful in his attack and knocked the skeleton on his back. We decided that skeletons should be hard to kill and would only be killed when knocked on the floor if three hits (on a 6) would destroy them completely. Otherwise, they had a chance to get back up (rolling a 5 or 6 as a full turn's action). 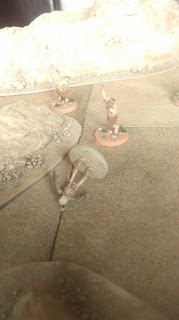 Whilst a Satyr used his extra move to rush the temple, the skeleton hopped back up and killed the horn player. Another blow for the Satyrs. 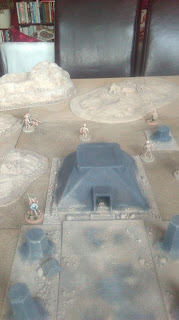 Two skeletons attacked the single Satyr on the right hand side, we ruled that when two or more attack one the attackers add one dice per extra figure to their poll, meanwhile the defender removes one dice per attacker. 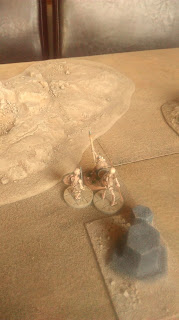 Sensing danger, one of the skeletons returned to the temple doorway to defend against the threatening Satyr. 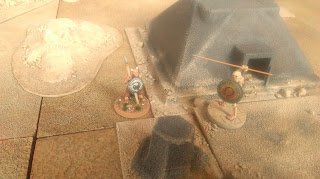 The plucky Satyr managed to knock down one of the attacking skeletons. 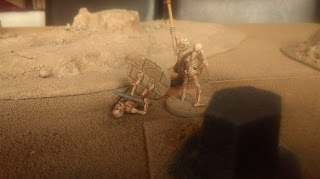 Meanwhile, the other two Satyrs threw their spears and knocked down two skeletons. 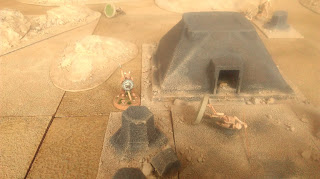 This triggered the possibility of more skeletons emerging from the temple. I rolled three dice and got two new skeletons! 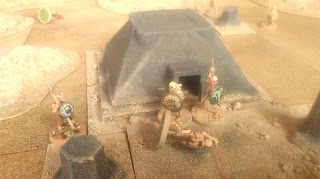 The Satyr on the right used the withdrawal roll (by testing against his Leadership) to disengage from the two skeletons, but was quickly caught up by one of them. 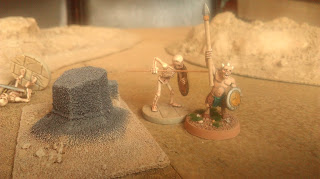 The Satyr was not killed but failed his fear test and ran. 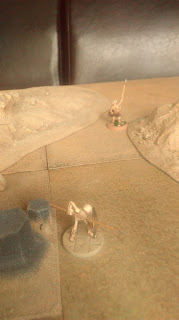 Back at the temple, the Satyr who had nearly got inside fell back from the threatening skeletons. 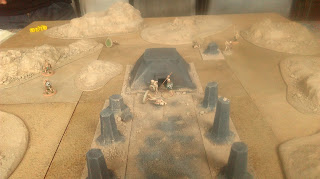 These three then rushed the two Satyrs. 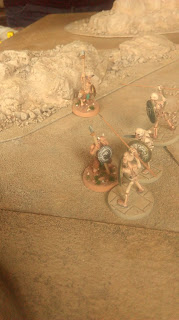 The same was happening on the right hand side. 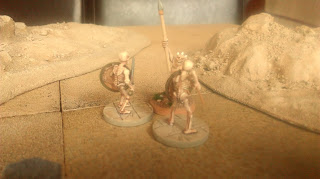 Two of the Satyrs were quickly despatched and the game was very nearly over. 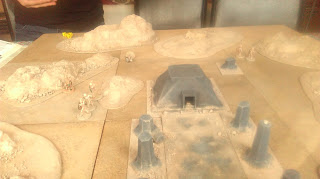 The final Satyr was brought down by a javelin wielding skeleton. 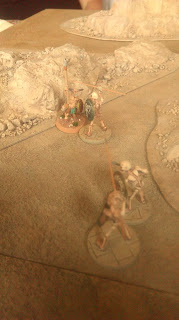 And the game was mine, all six Satyrs were killed without a single skeleton lost. The reworked rules seemed to work and made for a fast game; we had a conclusion reached within two hours and that was with working rules out on the hoof. I'm looking forward to the next game. Warhammer has a good game at its heart, but all the bolt-on nonsense made it unwieldy, however, this game proves the core rules are workable.


I am also still selling 122 military and history books on EBay (ends on Saturday), if you are interested, here is the link to the EBAY SALE.