All Quiet on the Blog Front

This blog has been quiet for these past few weeks as I have been moving house andthat has obviously had a toll on the painting output. However, the new house has a loft conversion, which I have acquired as my new war room. This is great, but this the state of play up there right now: 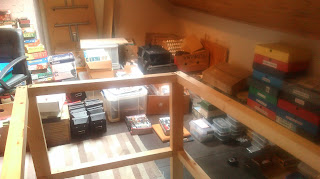 As you can see, there's not much I can paint yet... But that is for the future. In the meantime, I can still play board games on the dining room table. Which is exactly what Ninjasaurus Rex and I did on Sunday. The game was Quartermaster General, by Griggling Games. I had got myself a copy by doubling up on the Plastic Soldier Company Kickstarter for the Victory or Death board game. I'd not even heard of QMG before, but I trusted PSC and pledged my £60. 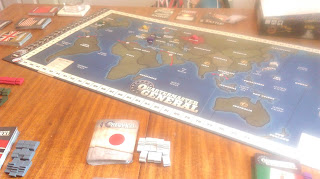 Interestingly the game has very few pieces on the board, which is unusual for a WW2 based game. I was brought up on Axis and Allies and expect large amounts of toys on the board. In QMG, only one piece from each side occupies a territory, as the game is principally about supply and supply lines. It is also card driven and you have a finite amount of cards to play over the twenty turns a game will take (unless one side captures two enemy capitals or outstrips their opponent by 20 points at the end of a turn or one side reaches 400 points). The cards drive your strategy and are different for each country, with events, statuses and responses. Only one card is played per turn but with some planning you can trigger responses that allow you to do more actions in that turn. But as with the actual war, time is against the Axis (Germany, Japan and Italy) and they have to act fast before America (and the other Allies, Britain and Russia) gears up her war machine. All scoring is done by teams of either the Axis or Allies and in our first tester game, the Axis (me) won by twenty points, but with low scores all round (Axis: 88, Allied: 67): 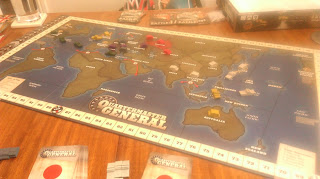 In the second game, we had a better feel for the cards and how the game operates, when the Allies won, again by a twenty point margin, but with much higher points overall (Allied: 132, Axis: 108). We made a few mistakes here and there, for example, forgetting the all important supply rules, but these were our first two games. 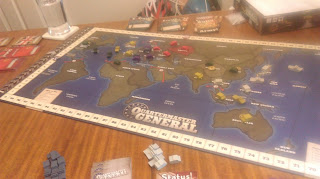 QMG bills itself as a fast play WW2 board game and it surely is, we had satisfactory conclusions within an hour or so on both games and the game was exciting throughout. We both concluded that the cards really gave a good period feel to the game and it proceeded very much along a similar time line as the war, except one point where Italian armies were threatening Moscow! The overall key is to plot your strategy and use the cards to set up good responses that will help your overall war effort.

Here is a video of how to play Qruartermaster General:


I'm really looking forward to playing Victory or Death, the Peloponnese War version of the game.

Thanks for reading!
Labels: board games New House Quartermaster General