In recent days I turned my attention from the First World War and back another hundred years to the ongoing 6mm Waterloo project. I made a start on the French II Corps, a daunting task in itself, but I began with Baron Husson's 1st Brigade of the the 5th Division. The Cent Jours website tells me 1st Brigade comprises of 2nd Light and 61st Line regiments. However, Mark Adkin's Waterloo Companion goes further saying that the 2nd Light were transferred on the 10th of June to 6th Division and were replaced by the 3rd Line Regiment.  Taking my pick, I went with the 2nd Light being part of the unit as it meant that I could paint half of the figures in blue trousers. 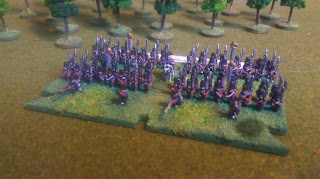 This was another standard French infantry unit, the division fought at Quatre-Bras and lost about 1,500 men. 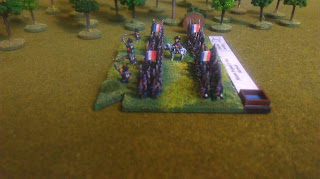 5th Division was a veteran unit which had fought in Germany and Russia. 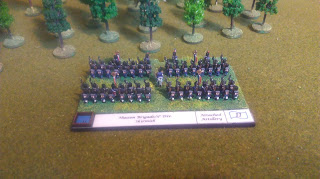 They formed part of the right hand flank of the French army during Waterloo, west of the Charleroi Road. Some of the division tried to advance against Hougoumont, but were driven back by artillery fire. 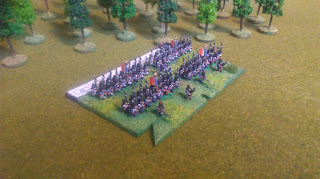 Every great journey begins with a single step and creating II Corps is no different, this is the first of about ten brigades.