As I said in a previous post, this Saturday saw a Square Bashing refight of the 1st of July 1916 offensive on the Somme, between myself, Ninjasaurus Rex and Dean. Square Bashing is perfect for the massive proportions of the attack and this scenario included the attacks on the fortified villages of (left to right in the picture below) Serre, Beaumont-Hamel and Thiepval.
Ninjasaurus and I took the British attackers, which consisted of:

And Dean controlled the German defenders which had the following:

The British objective was to capture three of the four objectives, three being the villages and the fourth being Hawthorne Crater on the German front line.
Dean rolled for his pre-battle depletions, only losing one MG and forcing a Battalion into the reinforcement pool. Otherwise he had an almost full defence force, this was not looking good from our side of the wire...

The Germans stayed true to their 1916 defensive tactics and piled everything into the front line trenches. Dean gambled that a strong defence on the front would blunt an attack, but would it work? 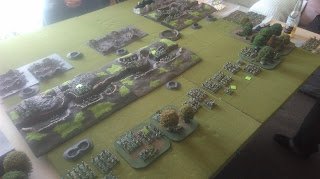 The first move saw a general advance against the German line, fortunately my units in the woods passed their roll to leave the terrain square and everything went well. For now. We also rolled for our asset which was a shock attack (the blue counter). In hindsight, a barrage would have done us well at this point... 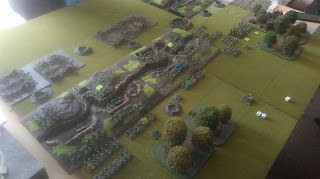 This is where things went pear-shaped immediately. Despite killing half a base of Germans their guns cut down my attackers in front of the Apostle Copses. 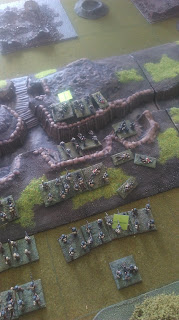 My right flank was also faring badly, being unable to gain a foothold in the German lines, despite having a bonus from the asset and Higher Command orders. 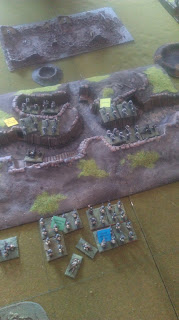 Meanwhile on the British right flank the advancing infantry were caught in a German point barrage, Ninjasaurus' men were in the open and totally unprotected! 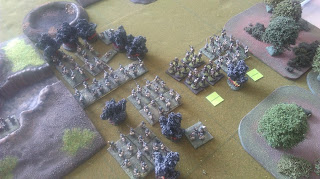 The effect was pretty devastating and caused massive casualties. 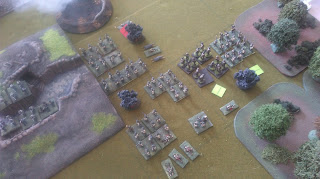 On the left, all my attackers failed their morale tests and were driven back to their start lines to lick their wounds. 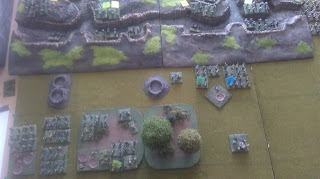 In the same morale phase the British right panicked and three whole battalions routed off the table! If it wasn't already looking grim, we had just lost a sizeable portion of the army due to one artillery barrage! 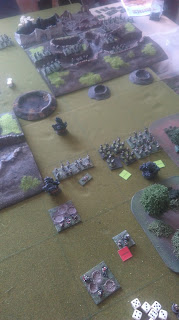 In a reassessment of our strategy, we decided to concentrate all our force on the German front line and Ninjasaurus moved his professional units into position to help the assault there. 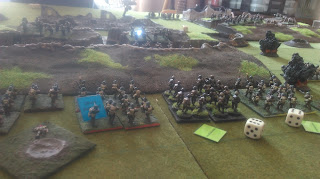 So by the end of turn two, there had been no British gains and the Germans were still in possession of their line and looking as menacing as ever. 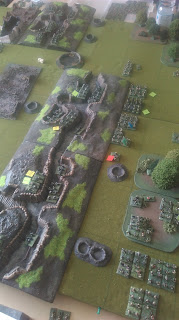 The next move saw us using a Rolling Barrage from our assets, helped by the addition of a spotter plane over the battlefield that we had brought in earlier. It was aimed at the German front line but fortune was against us as it fell over the target in the row directly behind the front line. Not a single German unit was affected by it! What a disaster! 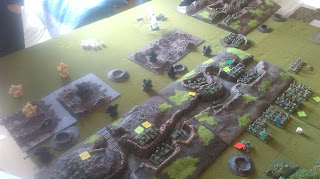 Despite this setback, faint heart ne'er won fair maid and all that, so we launched another infantry assault in an attempt to dislodge the Germans. 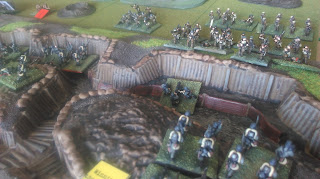 Ninjasaurus attacked with his depleted units on the right flank, but again, these attacks only saw more British casualties. 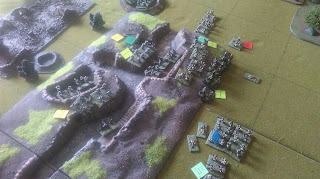 On my left my professional unit had failed their roll to leave the safety of the copses and the attack was desultory and uncoordinated as a result. 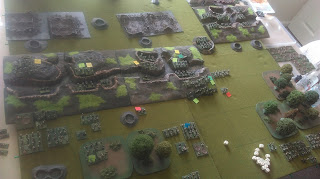 With the German turn came the inevitable barrage, this time a rolling barrage which hit our back line and all the troops that had fallen back from the previous turn's attacking. 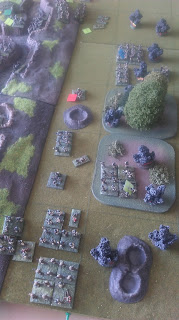 On the right, the British came under rifle fire which only added to the mounting casualty list. 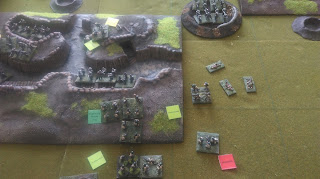 Another German point barrage brought more death to the soldiers in the copses. 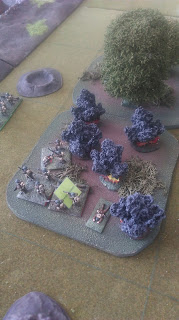 We had no options but to just keep trying to break the line and whittle the defenders down, however the British attack was getting smaller and smaller with each attempt. 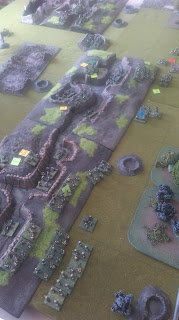 More disaster on the right as the field was covered with the dead and dying British attackers, with others falling back. 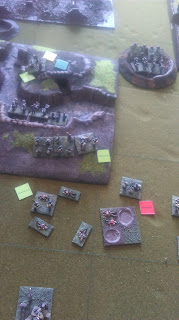 The left faired no better, but we were slowly killing Germans. 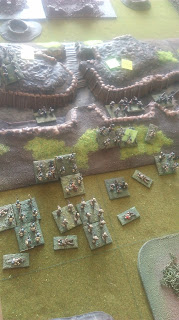 The Germans had another trick up their sleeve in the form of a gas barrage. This was designed to cut off any retreating British units, but also caused casualties to the ones on the start line. It also had the added effect of forcing our Higher Command off the board temporarily. 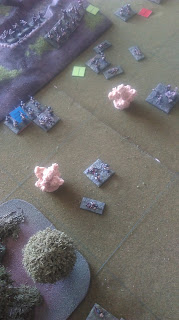 We were in a tactical pickle and the only way of dealing with it was the keep trying to reduce the numbers of German defenders, the machine guns were not allowing it though and nothing was achieved except more British dead. 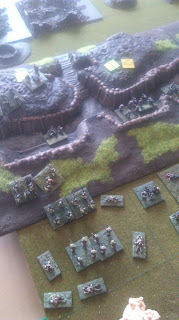 Things were now desperate on the right flank, most of the attacking force was either dead or had routed. 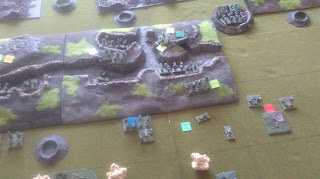 Then the gas began to drift, causing more casualties amongst the units. 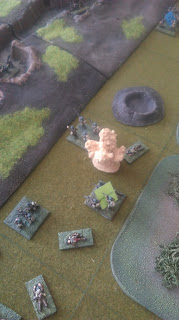 As the defender, Dean rolled the countdown dice for the last time and brought the game to a close. This was the state of play at the end. 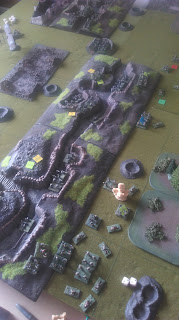 In not one place had the British been able to get into the German lines or passed the third row. Two things were at fault, I think that the tactics we used should have been better thought out. We frittered away chances with penny-packet attacks that stood no chance and in a refight, I would try to punch through the German line at one point, rather than all along the front as we did. It needed a hefty blow to smash through machine guns in defence but we were unable to deliver it. Secondly, the dice were against us, this sounds like a bad workman blaming his tools, but we have never seen so many 1s and 2s being rolled as we did in this game.

Hindsight is always 20/20 vision and on reflection the British failed to use our assets to good effect. We should have called in a rolling barrage or point barrage immediately, to soften up the defenders, instead we wasted two turns adding a fighting bonus and aircraft. Dean's effective use of artillery really helped him and it should have been advantageous to the attackers as well. We did no better than the British attackers on 1st July 1916, except that elements of the 36th (Ulster) Division managed to get into the German lines at Thiepval, but other than that it was a historical outcome.

The day was finished off by playing Tanks, the new tank skirmish game released by Battlefront and based on the computer game of World of Tanks. Dean had bought a copy as it was cheap and wanted to see how it played. 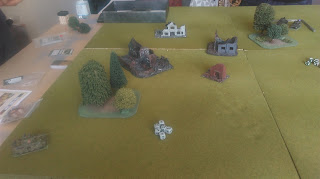 I grabbed some scenery and we played the first scenario of Barkmann's corner, with one Panther (me) against two Shermans (them). In conclusion it was an easy game to learn, I liked the dice pooling element and we fought to a satisfactory conclusion of one Sherman to one Panther lost. It's a knock about game and something that we'd play after another larger game, but not the main event itself. 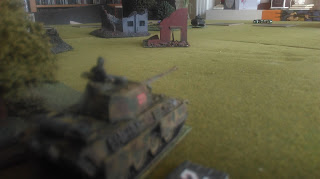 And speaking of panthers, here's a gratuitous photo of my black cat, trying her best to kick my First World War figures off the table. 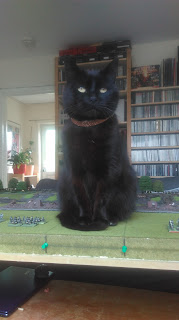