I can only apologise for the fits and starts of updating this blog over the last few weeks. I have been very busy with one thing and another, every night seemed to have an event to attend or things to be done other than painting... However, I did manage to churn out some more German 15mm figures. These came from QRF, same as the British signallers that I painted a while ago.

The German equivalents are equally lovely figures, great thought has gone into the poses and the detailing is very good: 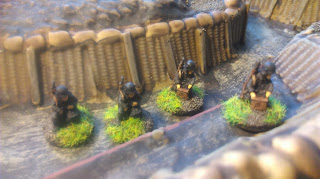 Along with the signallers the pack contained runners and sentries. However, I used these as NCO Big Men. 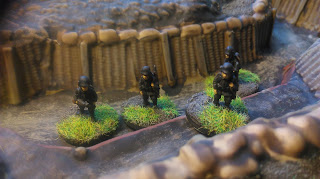 The bases were given the label treatment: 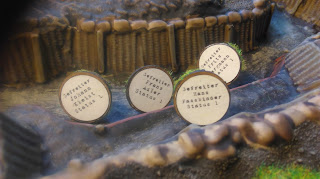 So another small batch of figures marches off the painting table and into their boxes. I will try to get more figures painted over the coming weeks when my partner is away working in Greece, but until then my social diary is pretty full...

Today is the 100th anniversary of U Day, the opening of the week long British and French artillery bombardment on the Somme. This is the real 'First Day of the Somme' and was the prelude to the infantry attack on the 1st of July. At this stage in the war the artillery tactics were not as fine tuned as it was in 1917 and was dependent of the destruction of the German trenches. 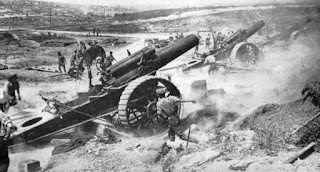 Many of the shells were dud, due to inconsistencies in manufacture and the Germans sheltered in deep underground dugouts, unbeknownst to the Allies. This led to the disaster that was the 1st of July, but lessons were quickly learned and put in place later in the campaign.

Thanks for reading!
Labels: 15mm Germans Infantry QRF Through the Mud and the Blood WW1