This coming weekend, I am organising a Square Bashing game centred on the British attack on the Somme in 1916. I have been thinking about this for a while and wanted to refight the attack on Thiepval by the 36th Ulster Division on the 1st of July. It proved a little difficult to track down the German defenders OOB and when I did it seemed like there was a handful of German battalions defending. In Square Bashing terms this would only be about three units.

The game needed to give the German defenders a decent chance, so I expanded the area of the scenario to include Serre, through Beaumont Hamel to Thiepval. This would then include the attacks carried out by some of the northern British Pals battalions, the Newfoundland Regiment and the Ulster Div, amongst others.

This isn't the usual size for SB game, but it makes for an interesting scenario. Square Bashing is based on a gridded table of 8 by 6 one foot squares, so I put together the following map for the game: 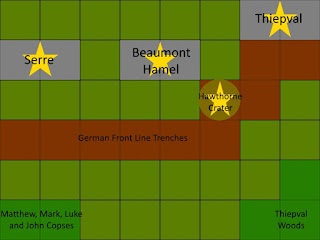 It's a very reduced version of the front line between Serre and Thiepval, but includes some of the main terrain features, including the copses that the Pals started in and Thiepval Woods from were the 36th Ulster Division attacked. I have also included the Hawthorne Crater caused by the mine which was detonated at 7:20am. This, along with the fortified villages behind the German front lines, is an objective. The villages will be defined as held if there are no German defenders in either square and at least one British base in there. To win, the British forces must hold at least three of these by the game's end. Any other result is a British loss.

The armies are based on the appropriate armies from the Square Bashing Armies Book, Number 15, British Mid-War Western Front 1915-17 and Number 22, German Army 1915-16, with a few modifications, namely dropping the artillery elements.

The British attackers consist of:

The German defenders have the following:

I think the British attackers will have a difficult time of breaking the German lines, just as they did 100 years ago, but which ever way it goes it should prove to be an interesting contest. I will post a full AAR when we have finished the game, but please feel free to use the map and OOBs for your own use.