Continuing on with the 15mm First World War figures that came from Peter Pig, I finished off the other four British rifle grenadiers. They are great little sculpts and a joy to paint. And being 15mm they didn't take long to complete. 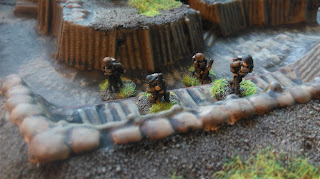 Then I turned my attention to the other side of the wire in the form of some German trench raiders. These are the ones armed with the MP08 sub-machine gun. There's eight here, but I doubt I will use all eight in a game as the gun was quite a rare sight on the battlefield. 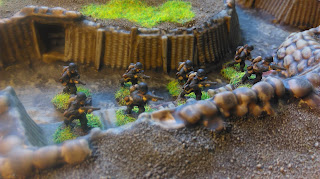 And finally in this first batch was the Germans with captured Lewis Guns. Again, these are not included in The Great War board game figures, so the Peter Pig ones will do just fine. I really like the Peter Pig poses for these ones! 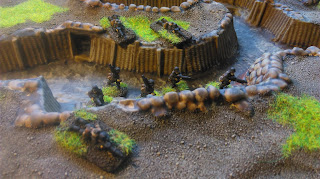 I am not painting these in particular units just yet, as they are individually based sorting that out can come later. Also, I have a few more lots of figures on the way to me, so this project is set to run for a bit. On top of that I need to get the plastic figures from The Great War painted as well, but it's an enjoyable process, especially during this important centenary year!

Thanks for reading!
Labels: 15mm British Germans Infantry Peter Pig Through the Mud and the Blood WW1