Dean came over for a game on Saturday, Ninjasaurus Res was to join us also, but he cried off at the last minute. Some crisis about work. Anyway, I had planned that we would play a game of Blücher using the figures I have spent a long time painting. This amounted to I Corps of the Anglo-British 100 Days Army against the I Corps of the French Army, with the Brunswickers shoved in for good measure. So a total of 167 points (15 Brigades) for the British and 106 (9 Brigades) for the French.
By Blücher standards this was quite a small match up so to counter the small size of the armies and make the Momentum Dice rolls still work (we were only rolling one MO dice) we split our Corps into smaller corps, I gathered the Brunswicks into one, the Guards and King's German Legion into another, the Dutch/Belgian and German troops into a third and finally the three cavalry brigade were a fourth separate unit. Dean formed two corps of four brigades of infantry and a third of the cavalry. We also had four attached artillery spread throughout the units. Our commanders were Sir Rowland Hill, with his Inspiring trait, which gives a bonus in combat and Marshal Ney with his Hero trait and ability to rally troops.

The battle was a fictional encounter in the aftermath of Waterloo with French fighting a rearguard action holding a small town and ridge line in front of the advancing British force. I had to gain part of the village as an objective along with a hill on his right flank. To gain both of these would be a complete victory, gaining one would be a partial victory. So we set out our lines and began: 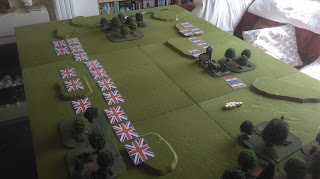 My first move saw the Guards and British infantry advance along with the Brunswickers on the right flank. I was heading straight for goal number one: the town objective. 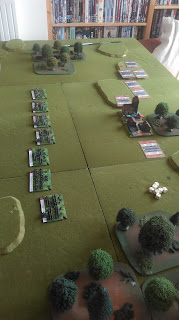 Meanwhile Dean began revealing his defence line in and around the town area, so far so good. I urged the Dutch/Belgian troops forward but they were faced with the woodland areas, so their going was not as fast as the rest of my line. 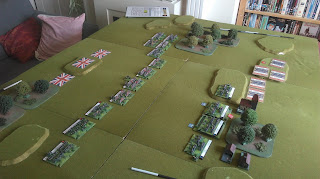 French cavalry began climbing the hills to face the oncoming British troops, but we were still too far away to begin firing yet. The Brunswickers moved to threaten the French left flank as I tried to straighten out the line! 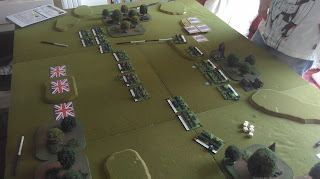 It was plodding work with the single MO dice, but I brought the cavalry corps down off the hill and they supported the rear of my infantry ready to exploit any weakness. Meanwhile, the French cavalry lurked on my left but held off charging. 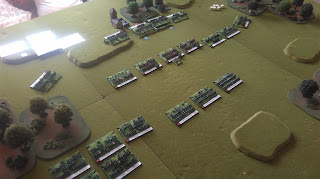 Finally, the moment I had been waiting for: the Guards lead an assault on the town. The rules don't allow for firing into urban areas, so the French defenders were at their freshest. However, I had the support of Hill and his Inspiring leadership in battle which gave me an extra dice in combat. 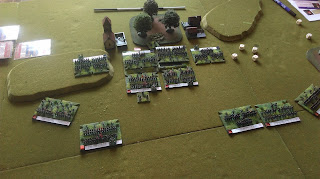 It wasn't enough though as the defenders repulsed the first assault, but at least I had damaged their Élan. 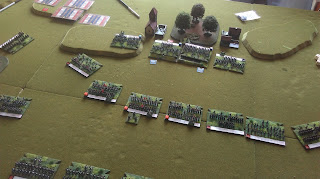 However, I was able to bring up the Brunswick infantry to even out future assaults. 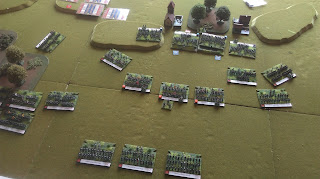 With a seemingly paralysed French cavalry not attacking my flanks I launched an attack all along the front. This would be the only way to dislodge the French from the objective. 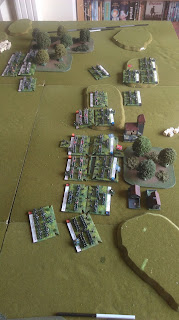 And it worked! Two French Brigades were put to flight, including the one holding the objective and another brigade broke completely when attacked by the 2nd Guards! 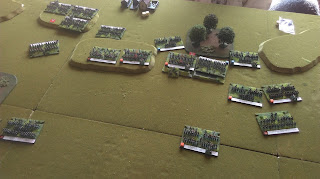 The French infantry fell back rather than stick around to be broken by further assaults. 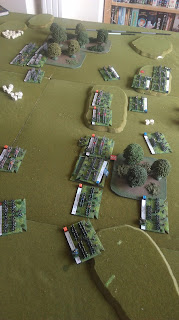 As good as this victory was, the right flank was not completely secure, a French brigade was still in the town and my troops with low Élan from the previous attacks. It would be a tough unit to shift. 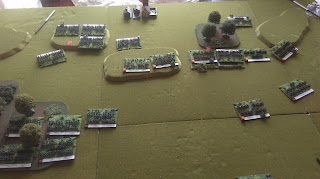 However, the 2nd Brunswick infantry tried their best to knock them out of the buildings, but to no avail. Meanwhile on the middle hill, one of the KGL brigades broke under whithering fire from French infantry. 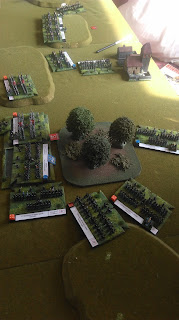 The Brunswicks attacking the town were thrown back again, so I began bringing my cavalry forward to support the Dutch/Belgian assault on the left. I had been neglecting this flank so it needed some attention and as time was slipping away I needed to leave the French town defenders for the time being. 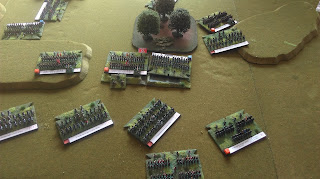 Things were a bit desperate over this side of the field, as I lost the 2nd Guards to fire from the French infantry of Schmitz's brigade, the second brigade they had broken! The Dutch/Belgians had finally reached a good position though, after tramping through the woods at a snail's pace and my cavalry were also on hand. 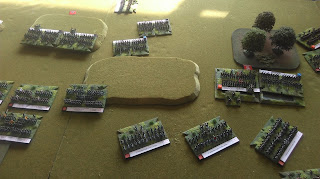 Although I was facing fresh troops, I was running out of time to capture the last objective as the day was already in the mid-afternoon. So the Dutch/Belgian conscripts charged in against the same army they had recently been allied with! 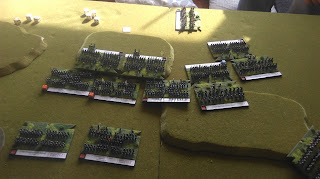 One French brigade was pushed off the hill, but another held their ground as my soldiers bounced off the French line. The cavalry had a little more luck, but not much! 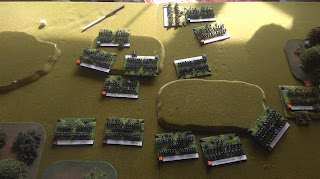 A successful French counter attack saw my men come streaming back down the hill they had just gone up. In the Hannoverian Brigade, the Duke of York's men went up to the top of the hill and came back down again! 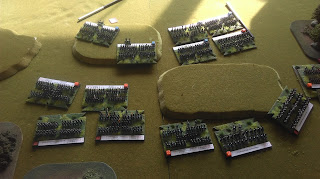 Undeterred by losses and needing to strike now before the close of day, I pushed in the two remaining fresh brigades. They were unable to capture the objective, but did break a third French brigade and therefore won the game by default. 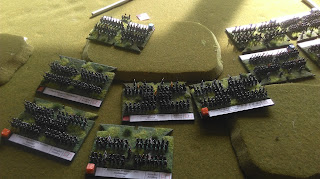 So it was all over on the twenty eighth move of thirty. A damn close run thing. I had failed to capture both objectives, but had broken his army and the day was mine. 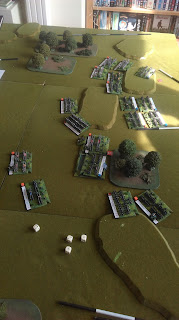 We both agreed this was another great game of Blücher and the more I play it, the more I like it. This was a particularly tense game, there were points where I knew I had to secure my right flank, but also act on the left but the MO dice were against me. The Napoleonic tactic of attritional firing before going in for the kill works really well and even the best troops bounce off fresh brigades. Now, I just need to get some more figures painted!

Finally, I am selling 41 15mm Stormtroopers on eBay, have a look HERE. These are like hen's teeth, so this is your chance to have a platoon's worth of them. Check out my other items for some old games and wargaming related goodies.