I recently painted the first batch of the tanks that came with The Great War expansion Tank!. They were very quick to finish, requiring only an inkwash and tracks painting and some detailing. Here is one of the Mark IVs that came with the core box set and the two that were given away in the Kickstarter campaign as a stretch goal. 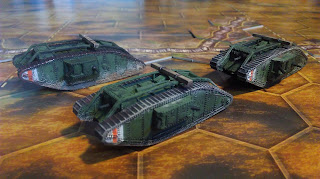 As I said, I simply inkwashed the tanks over their original colour with black ink, then painted the tracks in my usual way (I'll do a tutorial on this in a future post). The unditching beam was painted in Stone Grey by Vallejo then inkwashed with Army Painter's Strong Tone to give them a brownish tint. 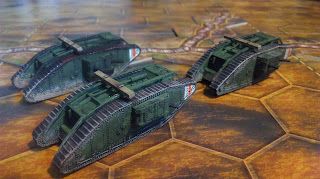 I finally gave them a light dusting of mud in the form of drybrushed Vallejo Khaki around the track areas. You can see one of the British Mark IVs (at the rear) has some heavier mud applied in the form of PVA and sand. I wasn't so keen on this clichéd view of the First World War mud, so I don't think I'll use it again.

The two German captured Mark IVs were given exactly the same treatment as the British tanks. 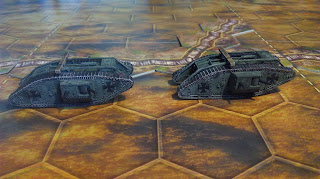 These were also a Kickstarter stretch goal reward and will make a very nice addition to the other bits and bobs in the expansion.There are a couple of scenarios that require the use of captured German Mark IVs. 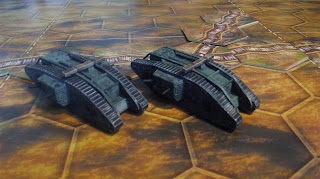 Thanks to the good detailing and pre-painted models this was a very easy job to complete and I am happy with how they turned out. There are three more Mark IVs and the two A7Vs left to paint, but I will finish the Whippets next and also post a step by step account of how I painted them when I do.