What 100 Days Campaign would be complete without the little Corsican himself? Luckily, Baccus have a set called 'My Little Ogre Playset' featuring the pint-sized tyrant and his staff. It's an expensive set for the amount of figures you get, but there is only need to buy one, so I did.

There are also two tents included in the set, here is Napoleon in his famous pose; feet resting on a drum. On one side are his personal infantry guards and the other is covered by his bodyguard Mameluke Ali. 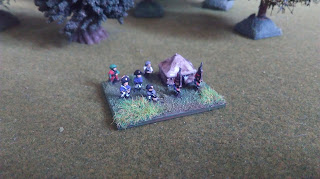 Napoleon on horseback is also featured, again with Ali close by and two other generals making reports. 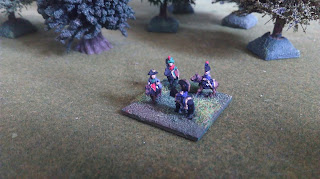 Here is Napoleon on foot discussing the ensuing battle with more staff officers. 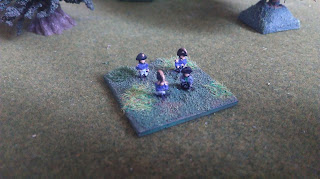 And finally, doing all his work for him, Napoleon's Chief of Staff, Berthier. Well, those orders don't write themselves... 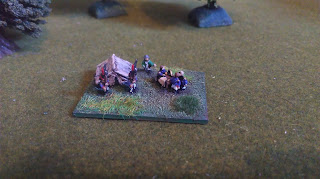 Each of these bases will be used for commander and sub-commander figures during games and certainly add a little something to the rest of the army. If nothing else, it was a chance for me to paint a lot of gold trimmings!

As previously mentioned, I am selling a few items on EBay, to make room for more 6mm Napoleonic figures... After a lot of deliberation, the WW1 20mm collection is up for sale, I have set it at a price that I think is OK as it does include a lot of painted figures. It is in two lots, the Germans and the British and includes infantry, support weapons and even tanks, click the links below to see the listings.