With the Brunswick soldiers proving easy to paint, I also finished off the 2nd Brigade of the Brunswick contingent pretty quickly! This was the Line Brigade and was formed of 1st, 2nd and 3rd battalions of Line, commanded by Lt-Col Von Specht. As with the 1st Brigade, this unit was heavily engaged at Quatre-Bras and then again at Waterloo. 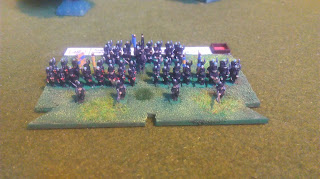 The Brigade is only three battalions strong, but is still at normal strength according to the Blücher rules. This interferes with my usual visual shorthand of understrength = three battalions rule, but I won't lose sleep over it. 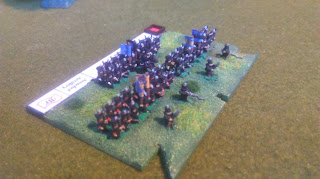 As I mentioned previously, the 2nd Battalion had standards. In fact, each battalion had two according to NapFlags (where I sourced the standards). So some chopping and changing was required as Baccus only provide one standard bearer per four man command strip. 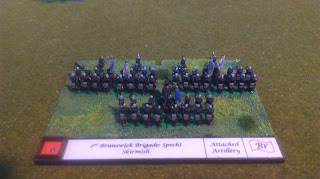 This brigade and the 1st represent the entire infantry of the Brunswick contingent. I think they look pretty smart in their black uniforms. 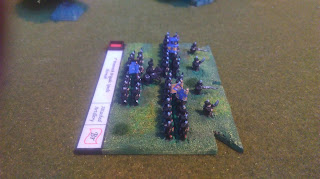 Next up, it's the Brunswick cavalry and attached artillery, then that will be another Corps completed.