The second to last items in the Tank! Expansion for The Great War board game from Plastic Soldier Company is the German A7V tanks. It never fails to impress me that wargamers have such an endearing love for these whitest of white elephants from the First World War. Only about twenty were built and even these saw very little action. However, they never fail to turn up on wargamers tables or in rules. Anyway, two are included with the base expansion set and I painted them along with the British Mark IVs. Another easy inkwashing exercise, made even easier by the lack of visible tracks! 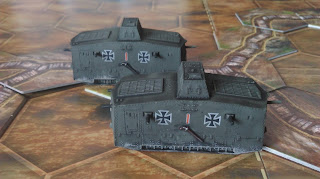 The only other items left in the box are the two German field guns, which I will paint in due course. Do check back for that.

In other news, I am selling a few items on EBay, to make room for more 6mm Napoleonic figures... After a lot of deliberation, the WW1 20mm collection is up for sale, I have set it at a price that I think is OK as it does include a lot of painted figures. It is in two lots, the Germans and the British and includes infantry, support weapons and even tanks, click the links below to see the listings.