Last weekend Ninjasaurus and I met up to continue the game of Star Wars Miniatures Battles that was interrupted the other week, by my better half being ill. This time she was at home, so if she did fall ill again I wouldn't have to travel out to Sheffield to get her! (she is all recovered now, by the way, just a case of very bad flu). So we picked up where we left off, I set the table up as it was and the figures were laid out back in position. From the previous game, we had just reached the morale phase and dice were rolled and everyone passed, so it was on with the action!

The red Stormtrooper squad advanced from the central woods to tackle the Rebels hidden in the opposite woods. So far, so good. 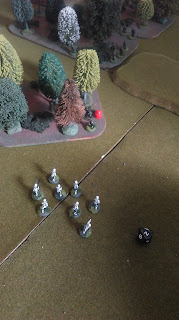 On my right flank the Blue Stormtrooper Squad moved up towards the hedge row and exchanged some fire with the Rebels who had spread themselves widely in a defence line. I killed one and wounded another, but two of my troopers fell wounded whilst another was incapacitated.Things were not so good on this flank. 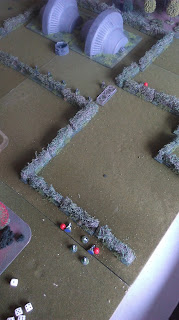 The Red Rebel squad around the woods took shelter behind the trees and the hill line, out of sight of my advancing soldiers. 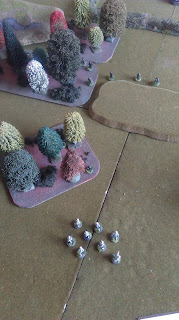 Meanwhile on the right flank, after an exchange of fire, both the Stormtroopers and the Rebels failed their morale and both were forced to withdraw! 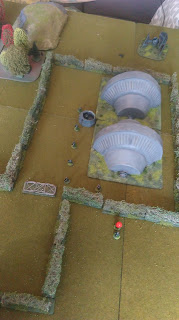 It's not surprising, since the Stormtroopers had taken quite a hammering by this point. 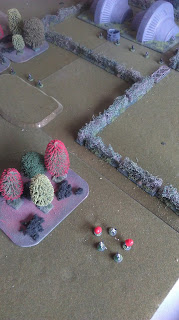 I moved in a pincer attack with two squads on the Rebel HQ and Red squad situated in the woods (carefully avoiding the cat wompa on the left...) and set up ready to pour blaster fire into the defenders! 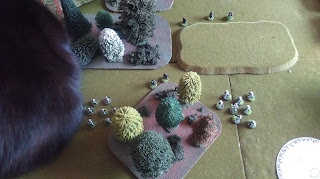 But then disaster struck as a Rebel grenade killed two and injured six of my red squad! 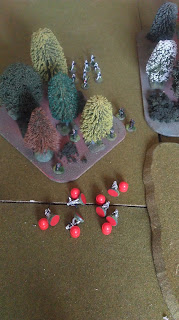 Another came flying out at my Green squad and did almost as much damage! 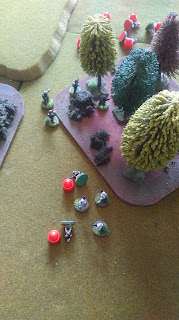 As the firing is simultaneous in SWMB, I was able to destroy his HQ and good few of the Rebel soldiers in the woods, but things were looking pretty bleak! 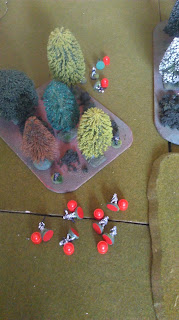 However, I pulled the men together and launched a charge on the Rebel held wood. As I had double the amount of attackers than defenders, I didn't need a morale test to see if they would charge.The Rebels rolled their receiving a charge test and passed that as well. 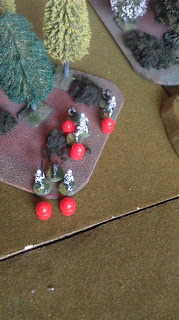 But just as I was pairing off the melee, the Rebels over the hill launched their own counter attack and hit my men in the flank and rear! 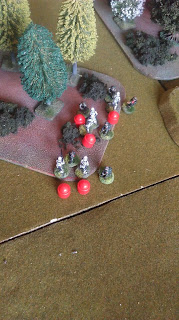 A furious clash saw some casualties, but more devastating for me was the morale collapse of my troopers, who fell back from the fight! 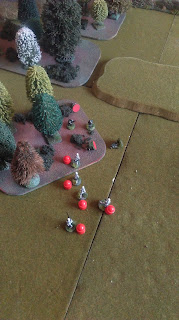 Seeing victory slipping away from me, I sent the remainder of the green squad into the woods to try and finish off the Rebels. 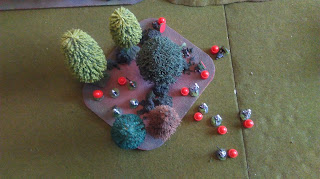 The Rebels pulled out their remaining grenades, the first of which killed the entire Red squad, largely because they were already wounded. The other grenade, thankfully for me, fell short and actually nearly wiped out the remaining Rebels! 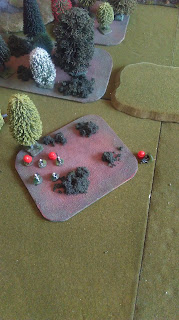 Things had been quiet on the right flank until I began moving the remaining Stormtroopers into a position to support the woodland melee. This brought them into sight of the second Rebel squad, who's blaster fire reduced their number! 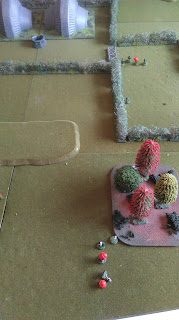 More morale failures saw this squad also fleeing for the table edge. At this juncture I threw in the towel, both of my remaining squads were badly mauled and I would have needed some pretty good morale rolls to get them fighting fit again. The Rebels held the area and were the clear victors. 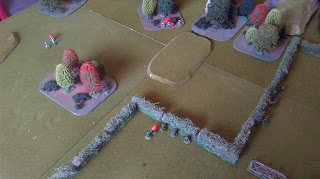 We finished off the day with a quick (ish) game of Medieval Mastery, a board game I picked up cheap recently. It was a bit of a cross between Risk, Settlers of Catan and Small World. Once we had the rules down, it was easy enough to play with only a few glances at the rule book. One to check out. 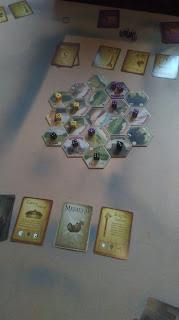