As part of the Star Wars Miniatures Battles project I have going on, I bought some Aquafid infantry from www.15mm.co.uk. They are pretty good look-a-likes for the Mon Calamari of the Star Wars universe, given the small scale. This is red squad, ten men each armed with blaster rifles: 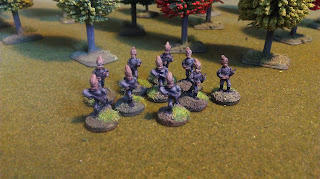 And Blue squad, unfortunately there isn't enough poses in the Aquafid figures to allow for other weapons, but I'm happy enough with them as they are. They were dead easy to paint, I just gave them all grey jumpsuits and quick inkwash. 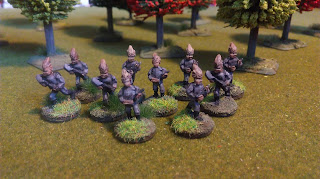 Also, I created an Excel file for the Hero Record sheet for Star Wars, I have uploaded it to Google documents and you can download it:

It has all the formulas worked out so just input the numbers and away you go. I have also created a record sheet for the Rebel heroes, Luke, Han, Leia, Chewie, Lando and Obi-Wan, with the stats taken from the Star Wars Roleplaying 2nd Edition Empire Strikes Back supplement (obviously Ob-Wan came from the A New Hope supplement...). These can be downloaded

There are also sheets for Darth Vader and Boba Fett, taken from the same supplement, these can be downloaded

And finally, I knocked up some creature sheets, which can also be downloaded

Hopefully they will be of some use to someone.