The French Are Here!

With the finishing of I Corps for the Allies during the 100 Days Campaign, I felt they should have an opponent to fight. Before beginning more Allied figures, I started the French I corps, as represented by the cards in the Honour 100 Days Campaign set. This is intended that I have two sides that can face off against each other eventually (whilst working on the full campaign OOBs).

Having learnt from working on the Allied I Corps, I started at the beginning, with the 1st Division. This unit consisted of two Brigades and the first of these was commanded by Colonel Claude Charlet (who was also commanding 2nd Brigade). The 100 Days Card for this unit name the commander as Quiot, who appears to have been Divisional commander  according to the OOB of the French army. I am not 100% sure but I am guessing that Quiot left command of this unit to command the entire division during the campaign. Let me know in the comments if you know the answer!

Anyway, I digress. The 1st Brigade is made up of two regiments of line, the 54th and 55th, each with two battalions. This unit also had skirmishers, which accounts for the four voltigeurs at the front. 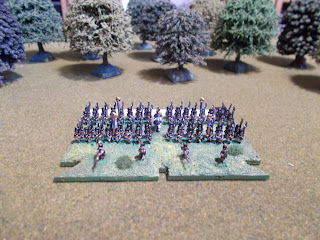 I had originally toyed with the idea of basing the French units in column, in a stereotypical representation of them advancing across the field. However, as the usual way of fighting was in line, I decided that I would base the units in this way. Also, having tried out columns on the base, the base looked pretty empty! 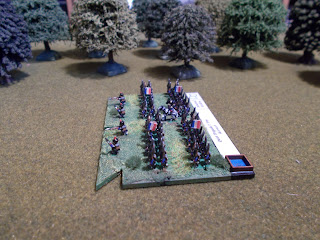 The figures came, as usual, from the Baccus 6mm French Napoleonic range, and the flags from Napflags.com. 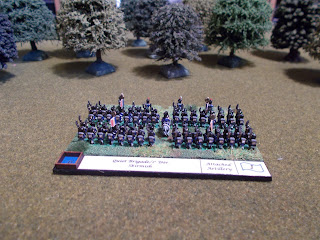 So the long trudge towards a full Corps of French soldiers has finally begun! Keep watching this space as more units emerge!