German Artillery from The Great War

When I put money behind the Kickstarter of The Great War board game, one of the extras was a set of German FK96 77mm field guns. The snap together kits also had four crew each and make five field guns. Unfortunately, the guns don't play a part in the actual game, but I thought I could easily use them for Square Bashing. With this in mind, I based the guns on their own bases, which came from Peter Pig.This also helped with stability as the models are nose heavy and tilt forward when not fixed in place. 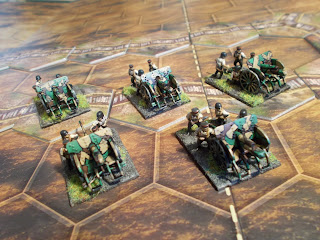 I wanted the guns painted in the German three tone pattern. In the First World War this differentiated from the later WW2 pattern by the colours being separated with thin black lines. The easiest way to achieve this was to paint the guns in black then paint small patches of the camo with the black still visible between them. 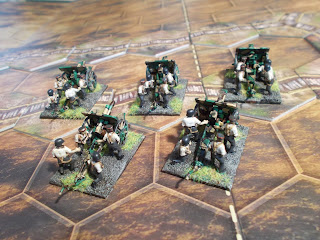 This process took a long time, but I am happy with how they turned out. I think if I had painted the camo patches first then black-lined it afterwards, I would have gone mad. The crew figures are nice, the helmets seem a little small to me and I do wish there was another pose rather than the two similar looking guys who are not carrying shells. 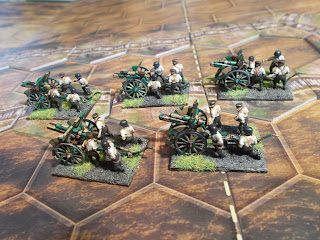 These minor gripes aside (and they are minor), these guns are an excellent edition to my other 15mm First World collection. I was thinking of making the other Plastic Soldier Company figures I have as Square Bashing units. It would give me an excuse to buy some Peter Pig rifle grenadiers.... Not that I need much of an excuse!