And finally the last unit for I Corps of the Allied army during the 100 Days Campaign. It is the 1st Hanoverian Brigade commanded by Major-General Graf von Kielmannsegge. This unit gave me the biggest headache during researching the Allied army for this project. 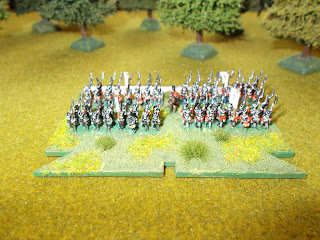 Secondly in Blücher, this unit is not classified as 'overstrength' which it would be with six battalions, therefore, I would only need four battalions on the base to cut down confusion in a game. In the interests of gaming I decided not to model the Grubenhagen battalion and instead only depicted, Luneburg, York, Verden and Bremen. I also left off the field jaegers, as there is no 'skirmisher' trait for this unit in Blücher. 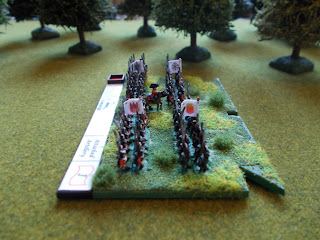 Unfortunately, my problems didn't stop there. The third issue in this unit was flags. I had seen several different sources that mentioned the Hanoverian Brigade went into battle with flags, so I wanted to have these on the base. However, few could agree what was correct. I searched and searched online until I found a source by a fella who was recreating Waterloo in 1:20 ratio! He had created some flags for his Hanoverian Brigades and had posted them online (I can't for the life of me find the link again, but all credit for work goes to him, whoever he may be!). They looked good enough to me, so I rescaled them for 6mm and printed them. 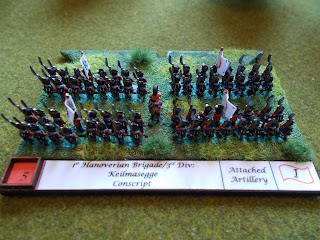 It adds another dash of colour to the Allied side, red-coats (and green) and white flags, and makes for yet another interesting unit in the army. 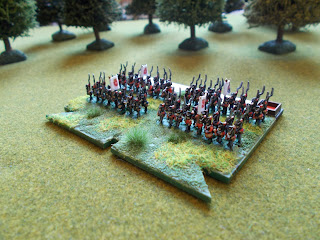 This is the last infantry unit of I Corps, however there are still the three cavalry bases to complete the full Corps. Once these three are finished I'll post photos of the full corps and then it's onto the French...

I am also conducting a short (six questions) survey about people's online buying habits, if you could send two minutes filling it out for me, I would really appreciate it. Follow the link here:

And don't forget that I am still selling pre-painted rubble on EBay, in three different colours: Black, Brick Red and Dark Brown. Follow this LINK to buy: