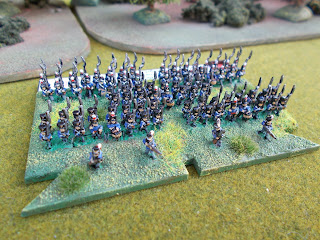 The 3rd Netherland Division remained in reserve on the extreme west of the Allied line during the Battle of Waterloo. However, they were thrust into the fray against the Imperial Guard towards the close of the action. The units in the brigade have no flags as I discovered that the Dutch/Belgian units at Waterloo were only awarded their colours after the campaign had come to a close, this made things a bit easier for me but I have now ended up with a lot of single figure flag bearers... 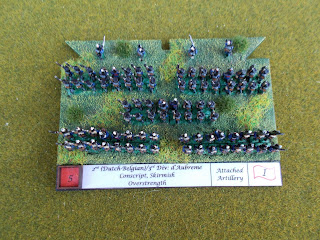 As mentioned this brigade had no less than seven battalions in its numbers. Two of these battalions were the Jaegers, so I modelled these as the skirmishers at the front of the unit. I only included four figures, although there were two battalions of them, as I didn't want to crowd the base too much as the base is already crowded with the five battalions of line and militia. However, this also works nicely as a visual shorthand for 'overstrength' units in the Blücher rules. It is easy to spot the 'overstrength' units on the tabletop, without having to refer to the base label in the heat of action. 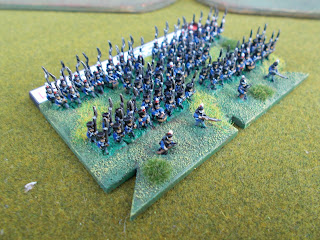 The blue uniforms also add a splash of colour to the otherwise red ranks of I Corps. Now I only have a handful of brigades to finish to finish off the infantry elements of I Corps. Beyond this there is the three cavalry bases and maybe my first artillery unit!