The Great War British by PSC

I have just completed the first sprue of British figures from the Plastic Soldier Company's The Great War board game. These compliment the German figures, which I painted a while ago. As with the Germans the majority of the 25 figures on each sprue are the infantry, obviously. Here they are organised into the four men units that the game uses: 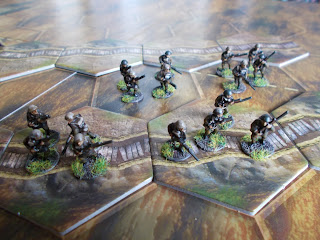 The British have a Vickers machine gun and three crew as support. This is more detailed than the German Maxim. 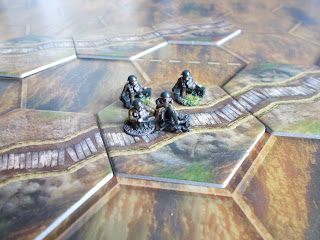 The sprue also has a bomber figure to add to a unit: 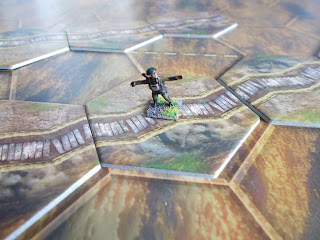 And as with the Germans, a trench mortar is included. This is a slightly over large 4" Stokes Mortar. 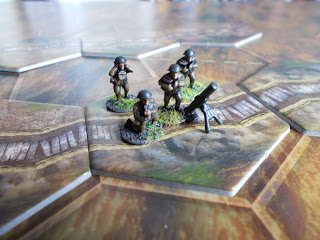 There are three sprues of 25 figures each in the basic game (a Kickstarter bonus allowed me to double up and get six sprues each of the Germans and British), making a total of 48 infantry, 3 MGs and crew, 3 Bombers and 3 mortars and crew.

The majority of the figures are wearing the small box respirator (gas mask) in the ready position on their chests, which was introduced in August of 1916 and was standard kit by the Spring of 1917. So these men can be used in other games as late war figures.

The British appear to be slightly more detailed in the sculpt than their German counterparts, with some of the figures having bayonets. This is a point to note though as several of mine broke off whilst I was removing the figures from their sprues. I was able to glue some back on, but the others were snapped beyond repair. The plastic is very brittle so it's certainly something to look out for!