You may remember that a while ago I bought a few few Curious Chaps from [REDACTED]. I bought enough to make a platoon of four 8 man squads which should be enough for my needs as Star Wars Miniatures Battles is skirmish level. This is the first eight troopers (Red Squad), one of which is armed with a heavy blaster. 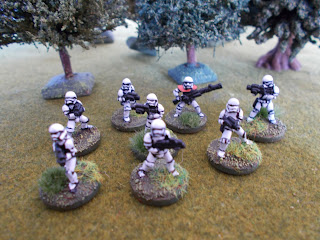 They are all mounted individually on some circular MDF bases that I bought from somewhere, specifically for these figures (I hope I can remember where for future reference...). They were pretty easy to paint, I undercoated them in Black then painted the White over the top of that leaving lines for the armour. This was then touched up with thin lines of black. I decided against any shading, at this scale it would be hard to see anyway. 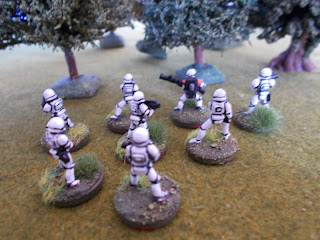 I have found that these figures are.. ahem... a little short for Stormtroopers, but they suit my purposes at the moment. I have some more 15mm Star Wars stand-ins on the way, so keep checking back for more updates on them!