Another tester piece (all I seem to be painting at the moment is testers, I promise, I will start a new project properly soon!) I recently painted was one of the 18lbers for the new The Great War game by The Plastic Soldier Company. It's an easy to build kit of five pieces and comes with four crew all in 15mm. 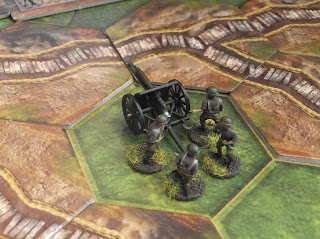 The gun suffers slightly from a lack of detail, especially behind the shield and some of the brass winding wheels are not present, however at this scale, it's not really noticeable. This minor gripe aside, it fits together perfectly (I think it is snap together, but I glued mine) and took minutes to make. 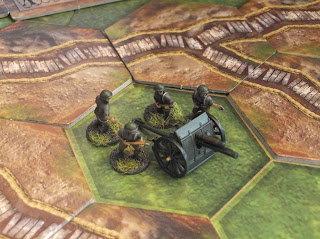 The crew are already based, but I added some sand just to give the base some texture and added some static grass to break up the shape of the base. 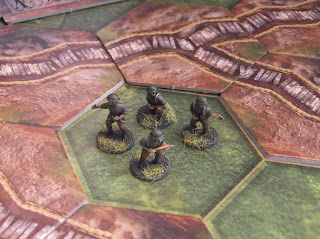 I got five of these guns with The Great War Kickstarter deal (along with their German equivalents), they don't seem to have much use in the game but make for a nice decoration to denote artillery batteries and they could always be seconded to Square Bashing if I really needed more artillery units. The sculpts are nicely moulded with good clean lines and I like the fact that the crew are in their undershirts with their braces hanging down as though they are working hard. They really reminded me of the famous picture of the 18lber gun crew firing on the Carnoy Valley in 1916 during the Somme offensive: 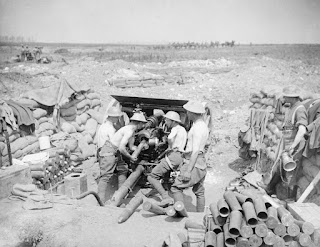 In a related note, I am soon heading out to France for a fortnight excavating a First World War battlefield for a BBC documentary on the Somme, so this blog will be quiet for a couple of weeks (again...), but thanks for reading!
Labels: 15mm Artillery board games Plastic Soldier Company The Great War WW1