After being satisfied with the results of my Blücher test base I began work on the 100 Days Campaign forces proper. The first unit is Major-General Peregrine Maitland's 1st Guards Brigade. It consists of two battalions each of 32 figures. 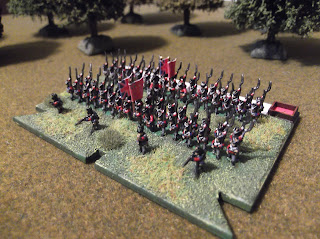 Out front is the skirmisher screen and Maitland himself is in the middle on his horse. You can also see the base label in this shot, which I based on the information given in the Blücher 100 Day Campaign Cards set. I printed the base labels and laminated them, this is so that we can cross off the 'attached artillery' section with a dry-wipe pen if the unit has no artillery. 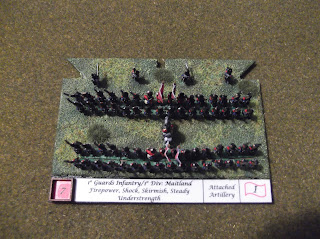 I took the inspiration for Maitland's horse from this famous painting by Thomas Jones Barker showing the Guards at the climax of the Battle of Waterloo, just about to give the Old Guard a good drubbing: 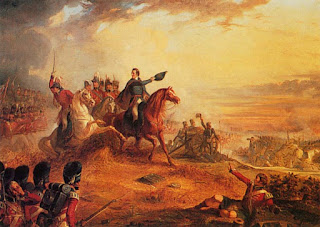 The flags were printed from NapFlags, I resized them to the correct dimensions. The Baccus flagpoles are too long for the 6'6" size of the flags, so they had to be trimmed down as well. 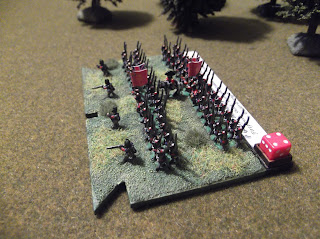 You can also see my solution to the Elan track that is a feature of Blücher. I bought several 7mm red dice from Minibits along with a number of dice holders of the correct size. As the highest Elan is 7 a six sided is perfect for keeping track of the current level during a game. 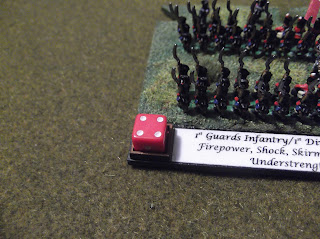 That's it for now, I have a lot more work to do on this project, so I assume it will go on for a long time, but thanks for reading!
Labels: 6mm Blucher British Infantry Napoleonics Waterloo