It's here! After what has seemed like an eternity of waiting, Plastic Soldier Company's The Great War board game is finally in my hands! It actually arrived on Tuesday (which was my birthday, great timing PSC!), but I was still working away and have only just been able to open the parcel. So, in this post I present a box opening!

You will notice that I have a stack of extras with my set, this is because I bought into the 'epic' bundle, which gave me pretty much a second set of the game. This included an extra set of German and British infantry, another mapboard, more map tokens and cards. On top of this, there was British and German artillery, eight metal officer figures and extra scenarios (the latter were only issued to Kickstarter backers). That's certainly a lot of bang for my buck! 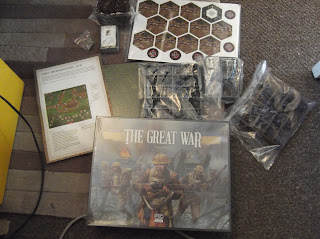 The game looks every bit professional, which you always expect from PSC, good art work and design. This is the back of the box: 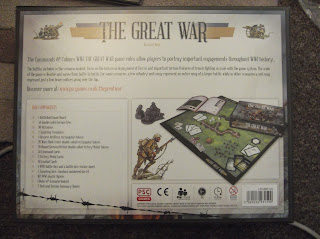 The box holds a plethora of goodies as well, more infantry, more counters, cards, play aids and a 52 page rules and scenarios book. Again, all well designed and well produced! 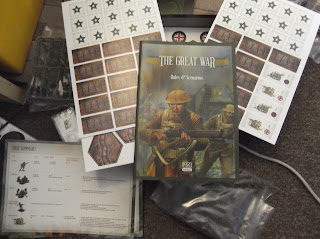 The map board is two sided, one side being green fields: 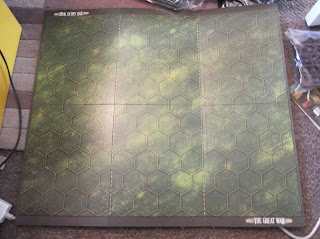 And the other side mud, well it is the First World War after all... 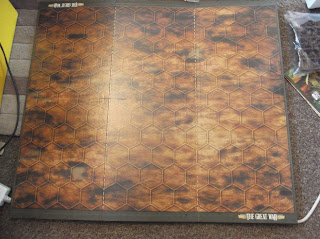 And I am sure you are eager to see what the figures are like? Well wonder no longer, this is one of the German sprues. Well made, crisp moulding and good poses as always with PSC. I did notice that some of the poses are similar to the Second World War Early War set of figures that PSC also produce, but that is no great distraction. 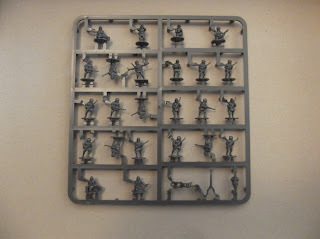 The British figures follow the same clean lines and well thought out poses: 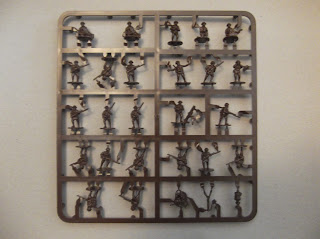 Here are the eight officers, these are of various nationalities which gives an indication of the future releases for this game. I am not sure if these figures will be released separately in the future, or if they are strictly a Kickstarter only item. 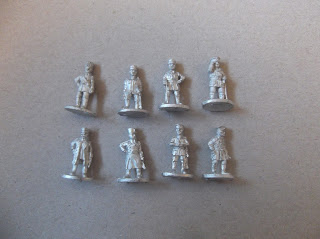 And finally, the artillery, which will be released as an extra. Here are the British 18lbers: 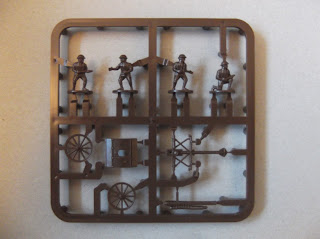 And the German 77mm. If experience with other PSC products is something to go on then these will be a joy to build. 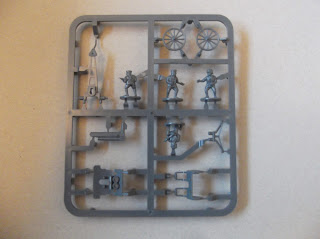 Well, that's it, a great product packed with goodies, I just need to find the time to sit down and paint them now (and play the game)! There are other expansions in the pipeline, including tanks but I will have to keep this quiet from my other half, as she'll demand I spend the money on presents for her instead...

Speaking of which, I also came home to a belated birthday present in the form of an MDF paint pot holder, that girl thinks of everything!