For the past few years, Dean has been slowly working on putting together the forces for the early Desert War between the British and Italians in World War Two and he has been the butt of continual jokes from me about the amount of time it is taking him to paint the figures. However. last Sunday, after the Joy of Six show, Dean, Ninjasaurus and myself refought the Battle of Nibeiwa, the first battle in the campaign of Operation Compass. Dean acted as umpire and handed us both our briefings. 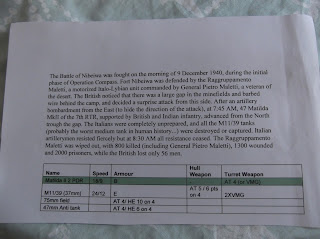 I took the attacking British whilst Ninjasaurus defended with the plucky Italians, commanded by General Pietto Maletti, here in his HQ objective: 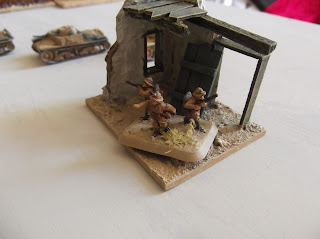 The Italian forces consisted of a lot of artillery, some native troops and six M11/39 tanks. However, at the beginning of the game the crews of these tanks were asleep in the fort.They had to reach the tanks for them to move, each turn a D6 was rolled to see how many woke up to start towards their vehicles. 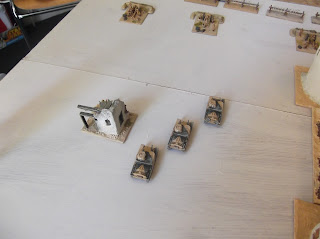 The Italians also had minefields and barbed wire to protect the approach to the fort. Some of the minefields were dummies, I had no idea which was which though... 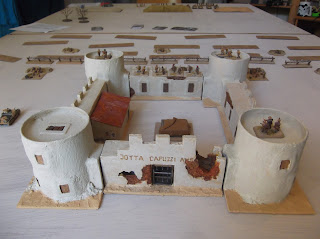 The main artillery line of the Italian defenders looked like a formidable barrier that I had to cross. 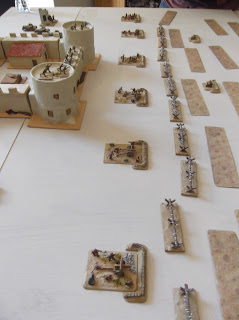 The Italian defence was set up thus: 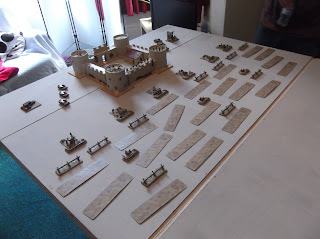 I thought the best way to get my forces across the open ground was to use the tanks of the 7th RTR as protection for the small amount of troops until we were able to close for small arms fire. This would also keep my engineers alive before they reached the minefields. 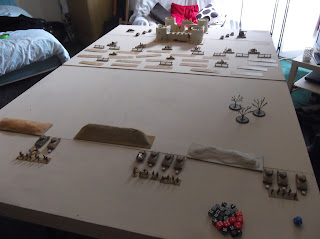 That's a lot of open ground between me and my objective... 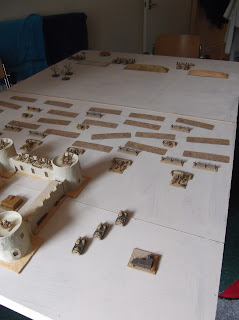 Turn one saw some of the sleeping Italian tank crews wake up and make a dash for their vehicles. Only three had been woken up by the advancing Matildas of 7th RTR. 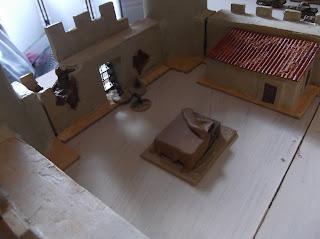 As the British tanks advanced, they opened fire with their machine guns. Unfortunately I only had armour piercing rounds for the main guns, which would be useless against infantry. However, I started causing casualties on the Italian machine gun crews. 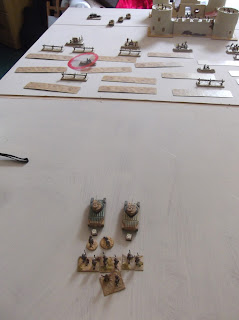 The Matildas ran at a slow speed in order to allow the infantry to use them as cover and the Italian artillery was useless at this range against the armour. However, on my right flank I pushed the tanks forward to close quicker, which in turn left the infantry vulnerable to artillery fire. 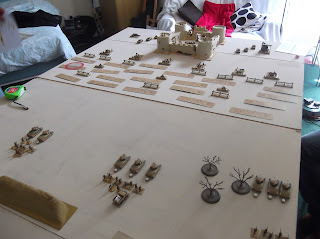 Meanwhile, more Italian tank crew rose from slumber, another six joined the mad rush to get to their tanks! 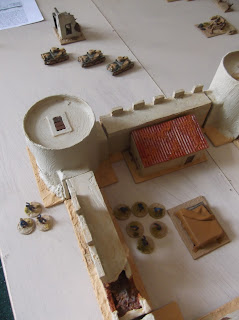 As I drew closer, Italian guns opened up on my flanks and caused a few casualties amongst my infantry. Regardless, I continued the assault and poured fire onto the machine gun nests. 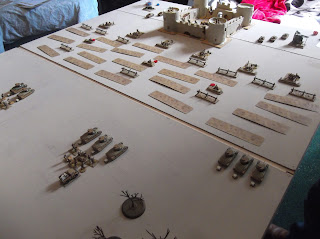 I was having some great success, two of the nests were silenced. 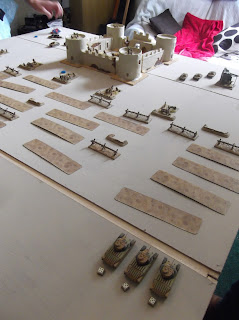 The Italian native troops were looking for any target that presented itself, unfortunately for them, none did! 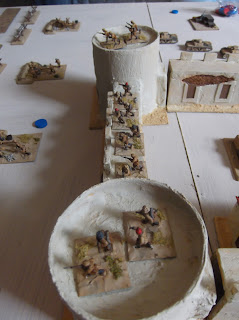 My Matildas began nosing their way through the minefield, if anything went within an inch of the field, it would set it off and reveal if it was real or a dummy. The minefields did their job by slowing my advance and splitting my forces. 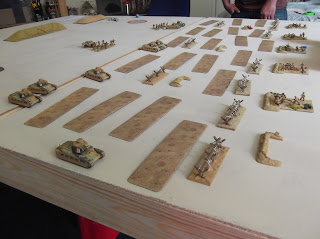 Although my attack was being slightly blunted the hapless Italian gun crews were failing to score hits on my force as it advanced over the open ground. 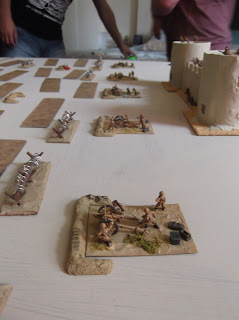 Just as the artillery came in range of my tank machine guns, the Italian tank crews reached the first three tanks and started the engines. 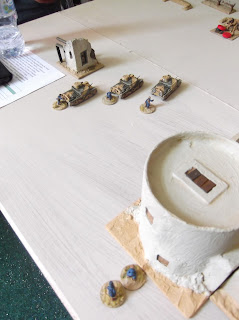 Meanwhile, a few lucky shots had battered the Indian infantry in my centre. 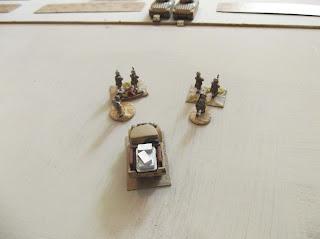 One unlucky Matilda also got stuck on a live minefield, fortunately no damage was caused, but it did halt my advance. 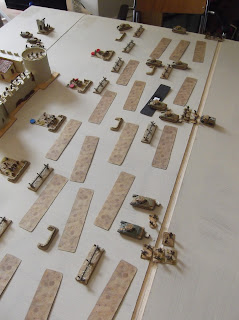 On the right flank I was having better luck, three of the artillery pieces had been destroyed and I had destroyed an Italian tank before it got up and running. The Matildas were short on ammo, each only had five shots (indicated by the dice), so I was happy to have brewed up an enemy tank with one shot. 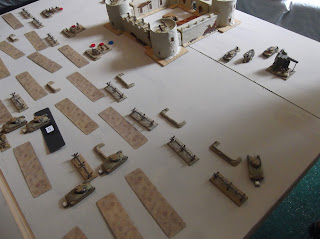 Disaster struck as the tanks were advancing through the centre minefields, most of which appeared to be live, and I lost a tank to an explosion. 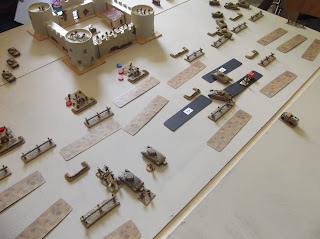 My right flank was currently under threat from the two remaining M11/39s who came charging in with guns blazing. They quickly discovered that their guns were useless against the Matilda's armour! 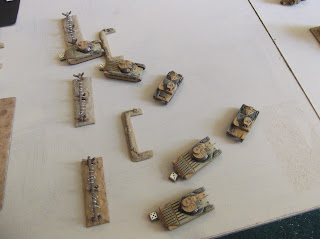 The threat didn't last long though, one of the tanks was destroyed and the other lightly damaged, putting paid to any breakthrough by the Italians. 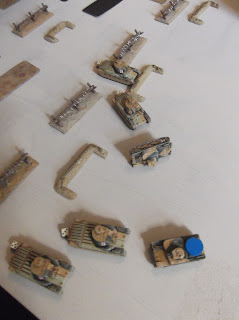 Not only were the Italian tanks suffering but the artillery had now been wiped out by the Matilda's machine guns. 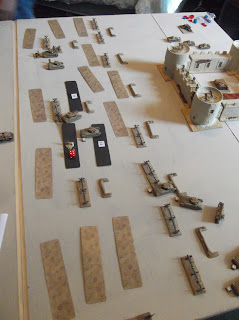 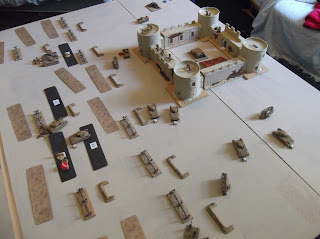 General Pietto Malletti failed his morale roll and retreated from the field of battle but at least he had survived. The Native troops in the fort fell back and the game was over. The British had broken through the lines and captured the fort. 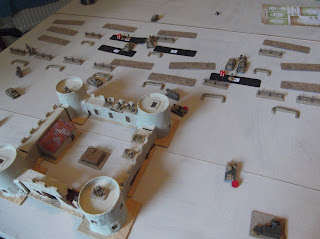 Then we revealed which of the minefields were live, they were concentrated on the right Italian flank and the centre. 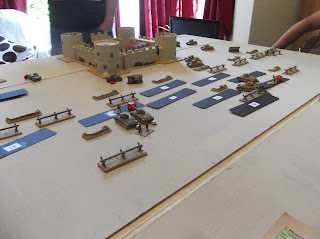 Just as the British won the real battle this result was no different. However, my casualties were much higher than in 1940, where no tanks were lost and there were only 56  casualties amongst the British infantry. In Rapid Fire! terms I had lost five tanks and a couple of hundred men.It was still a great start to the British campaign!

This game was also a chance for us to try out Dean's Rapido Fire! home brew rules, based on Rapid Fire! where the firing chart is done away with and replaced with handfuls of dice instead. We found that cross checking during a firefight slows down the game somewhat, but Dean had broken down the algorithm in the chart to produce a version where you calculate the amount of dice you roll depending on the amount of firing points you have calculated from  individuals firing. You then roll the dice and depending on the quality of troop (Elite, Regular, Poor) you need a base score to hit (4+, 5+, 6). The result of the hits are then capped depending on the cover and range to give you a maximum amount of casualties from the firing. It worked a treat and really speeded the game up no end. It also makes tactical choices more apparent: do you shoot everything at a target with a greater chance of hitting but causing limited casualties or split your fire with a lesser chance of hitting but greater casualties. I will detail the updates to the rules in a future post so you can try them out for yourselves.