The Stalingrad Project Is Finally Complete!

So after nearly nine months I have managed to draw the Stalingrad project to a close with four Panzer IIIs. They represent the other half of the 36th Panzer Regiment and this includes the Panzer IIIK Command Tank for the regimental HQ (The one with the tank commander). 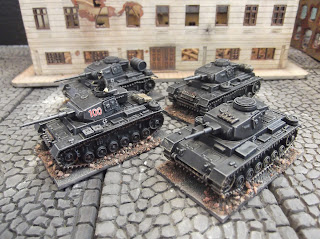 The other three tanks are the Panzer IIIJ variant with short and long barrelled 50mm guns.The lists state that one of the Panzer IIIs has a 75mm gun on it, but I researched this to breaking point and found that they only had 50mm guns. It's another minor issue in the lists that I have found on this journey! 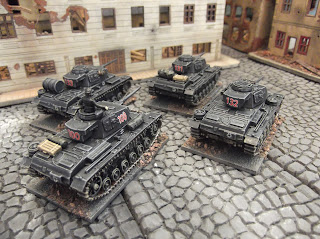 I bought a box of Plastic Soldier Company Panzer IIIs to build this unit, so there was an extra one in the box (I was going to buy four of their reinforcement sets, but it was cheaper to buy the box!), which I also painted and will use in future scenarios based in Stalingrad. Here's all five from the box: 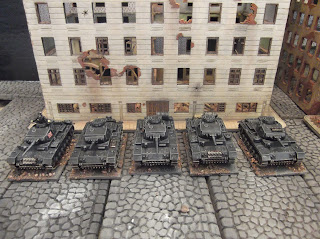 As I said, this last unit finally completes the Stalingrad project, so here are the German forces in full: 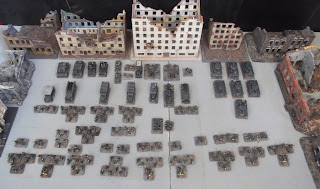 These don't include the extra bits and pieces I painted along the way to completion, but this is the attacking force as laid out in the Rapid Fire! Third Supplement. 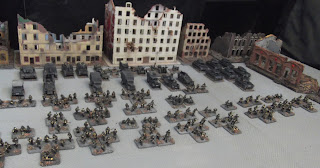 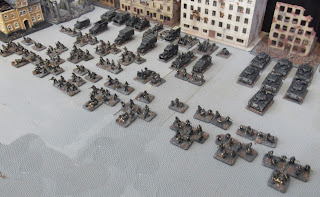 And to face them are the Soviet defenders of the beleaguered city. 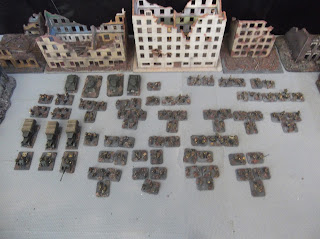 Again, there are a few bits and pieces that I put into the project as I went along (such as the snipers), but this is the 'official' force list. 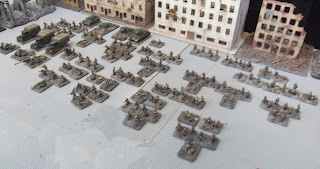 I am not going to list every single unit in this scenario (you'll have to track down a copy of the supplement to find out...), but it amounts to 170 German figures, 24 German Vehicles, 4 German guns, 184 Soviet Figures, 7 Soviet Vehicles and 3 Soviet guns. The final running total is: 354 figures, 31 Vehicles and 7 Guns. That is a lot of green and grey...

Now all that remains to actually play the scenario, but that will have to wait a while as I am currently working away and time is precious (it also means this blog may be a little slow as I don't have as much time to paint at the moment)... But check back in the future for a full AAR when we storm the Barrikady Factory!!