This has been another quiet week for painting, as I am still working away and there has to be a lot of running about when I get home at the weekend. However, I did manage to find some time to paint a few more stands of the Baccus 6mm British that I recently bought.

Once you get the hang of it, painting 6mm isn't any harder than putting buttons and eyes on 28mm figures and I painted each four man strip as though it was a single figure of a larger size. Plus you can do away with large amounts of detail with figures this size and shading. I have used Black (undercoat and touching up), Flesh (hands and faces, plus undercoat for red coats), Red (redcoats, duh), Blue (water bottles), Buff (knapsack and musket strap), White (cross belts, lines on back pack and shako tufts), Grey (trousers and greatcoat roll), Beige Brown (muskets and bayonet scabbard), Bronze (shako front plate) and Gun Metal (musket barrels and bayonets). Finally the Green for the base, makes eleven paints in total, probably less than most bigger sized figures. 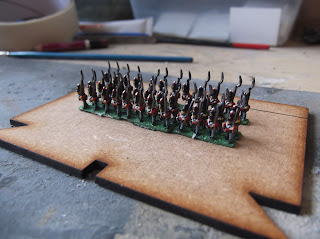 All eight bases took about two hours to complete from beginning to end. I am sure adding more figures will increase the time, but not by a considerable amount. The picture above shows them on a Sally 4th Blücher specific base. I have yet to glue them down, as I was thinking about the possibilities of basing. I was considering doing two units each of six strips, making a total of 48 figures per base. A commander figure and maybe some skirmishers would finish off the base nicely.

The Napoleonics are not the only latest additions to the lead pile. Also last week, I took delivery of some 15mm 'Curious Chaps' from [REDACTED]. I had to jump through a couple of hoops to get them, but this weekend I started work on a tester figure: 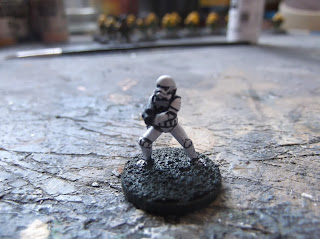 I just need to figure out the best way of shading white...