I finally finished the last Russian units for my Stalingrad project. There are simply no more Russians left to do now! I promise! I wanted to get the Russian guns from The Plastic Soldier Company, but I didn't need a full box and they don't do their guns as a reinforcement sets, unfortunately. I think they are missing a trick there, anyhoo, instead I ordered several German and Soviet artillery pieces from Command Decision by Skytrex, including a 76.2mm Zis-3 AT gun for anti-tank support of the 308th Infantry Division. This should give the German tanks something to think about: 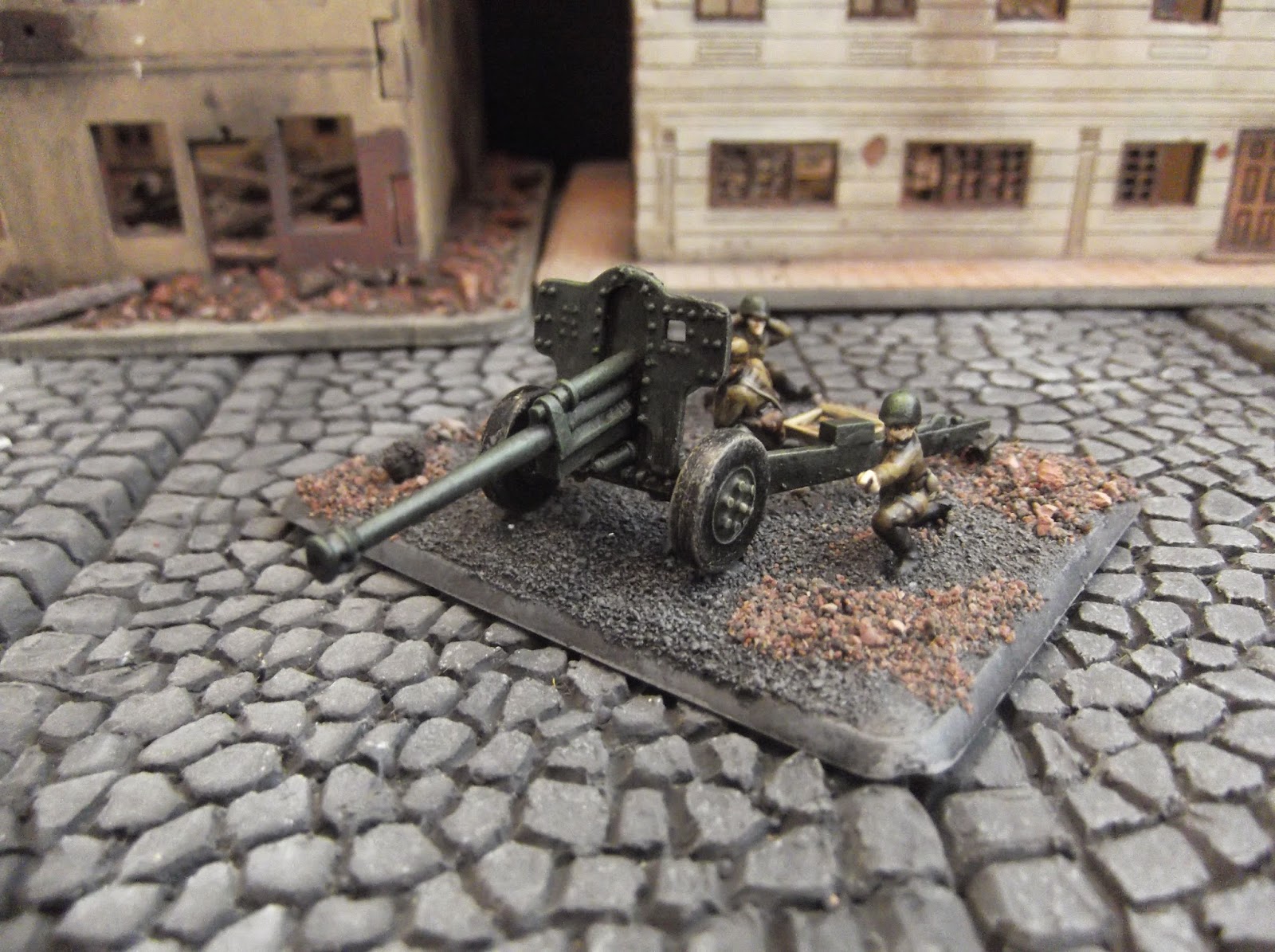 It is crewed with some left-over Plastic Soldier Company Soviet crew and a spare ammo box. The Command Decision guns are really nice models, crisp and clean sculpts, well worth the money in my opinion. Along with the 76.2mm, I needed two 45mm AT guns, both of which also came from Command Decision: 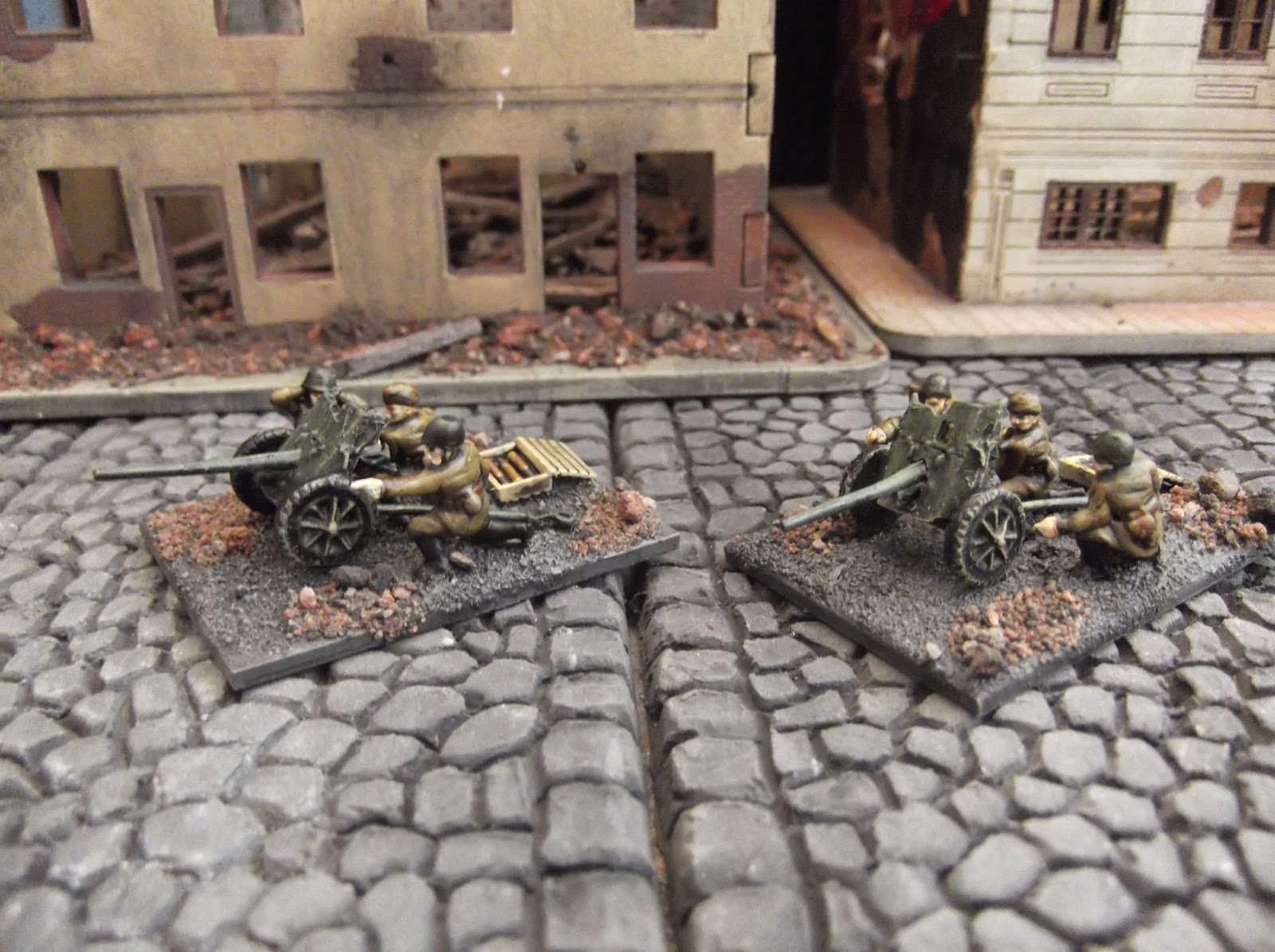 I used up the remaining PSC crewmen I had and an extra Peter Pig figure to keep them firing! 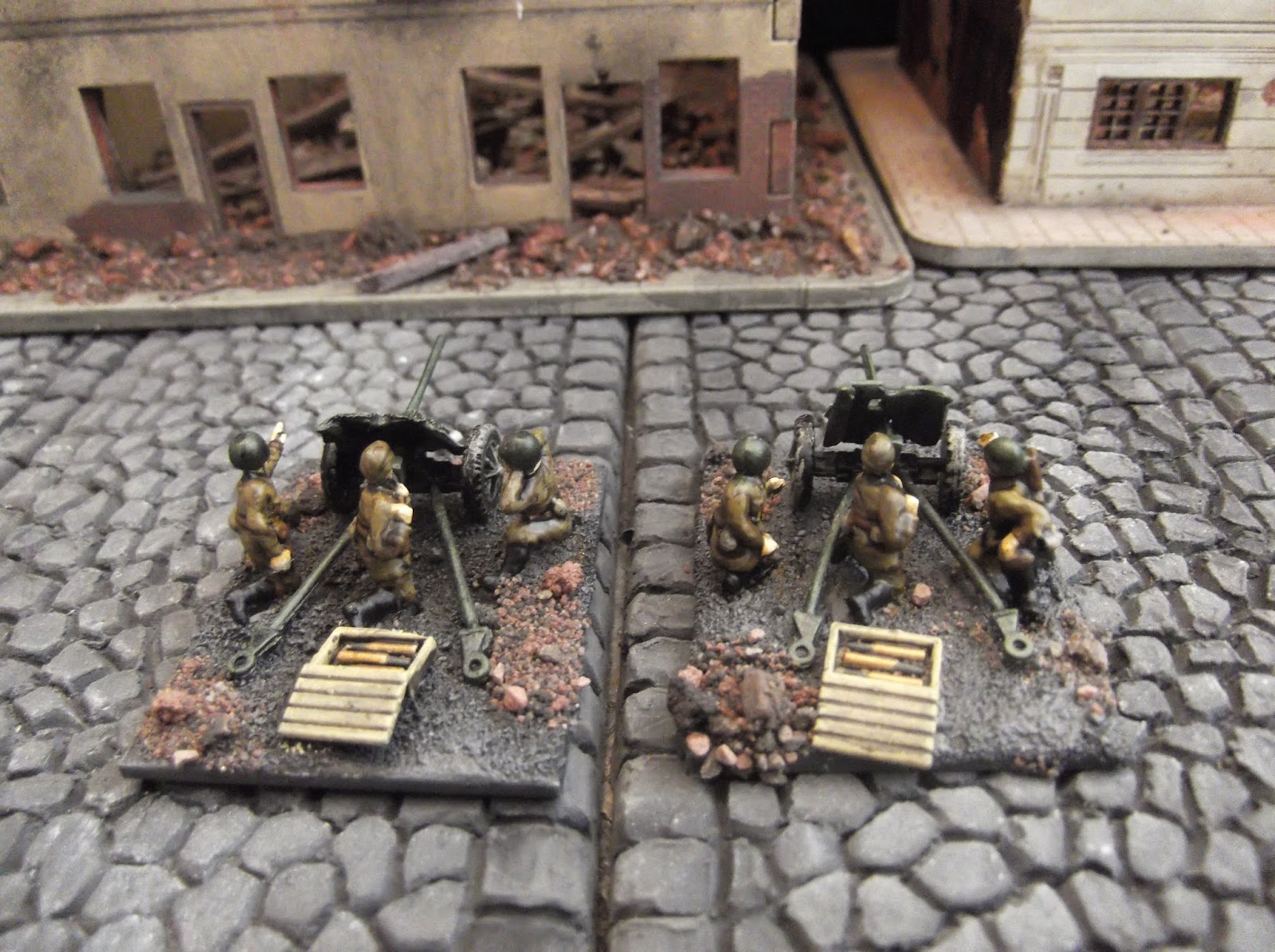 All three together make a formidable defence line for the 308th Rifle Division, which is now complete. 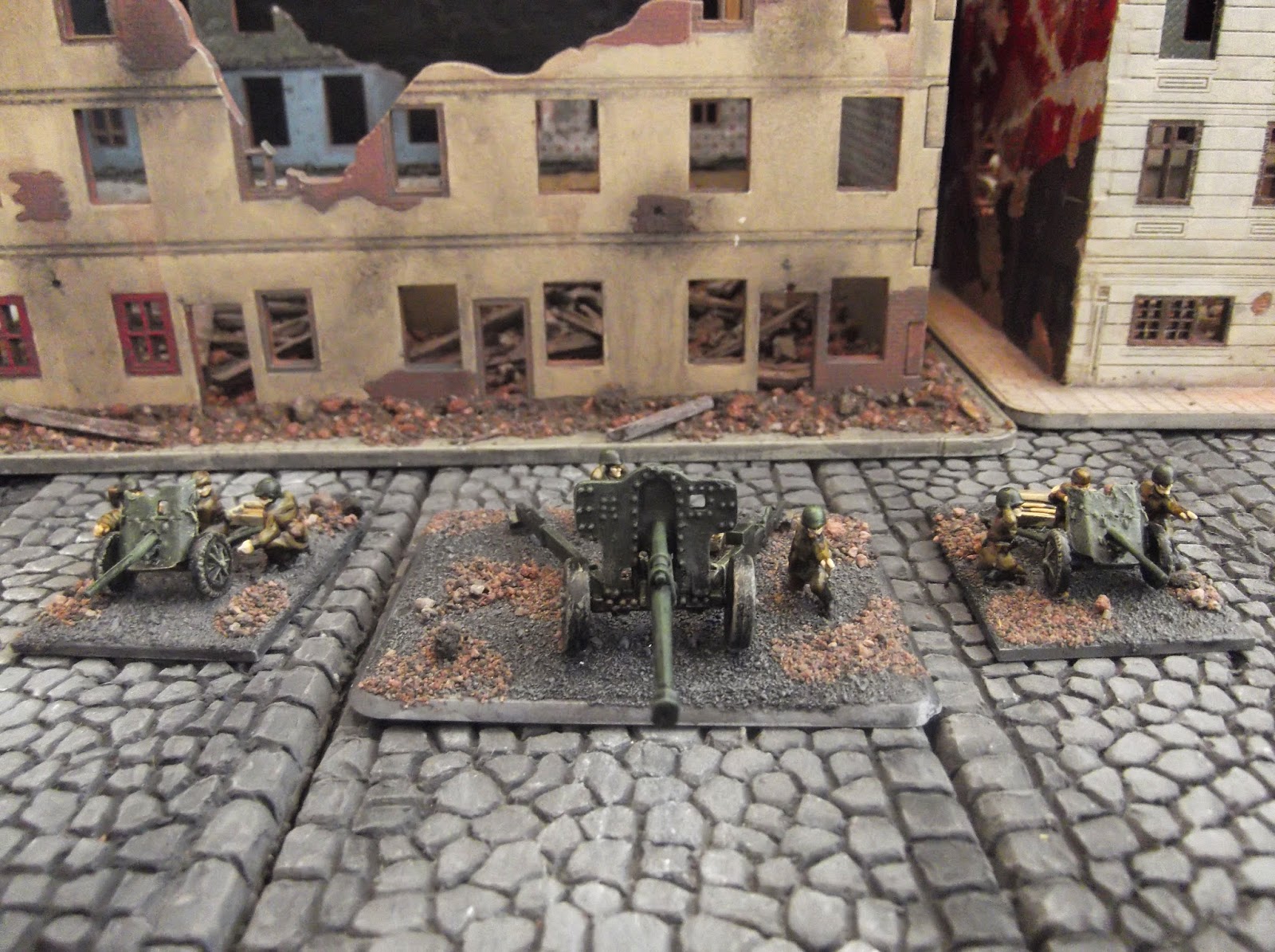 Also included with the Command Decision sets are towed versions of the guns. I don't have any Soviet trucks at the moment, but I may pick up a couple of Zvezda's plastic ones in the future. This is not really a pressing issue though. 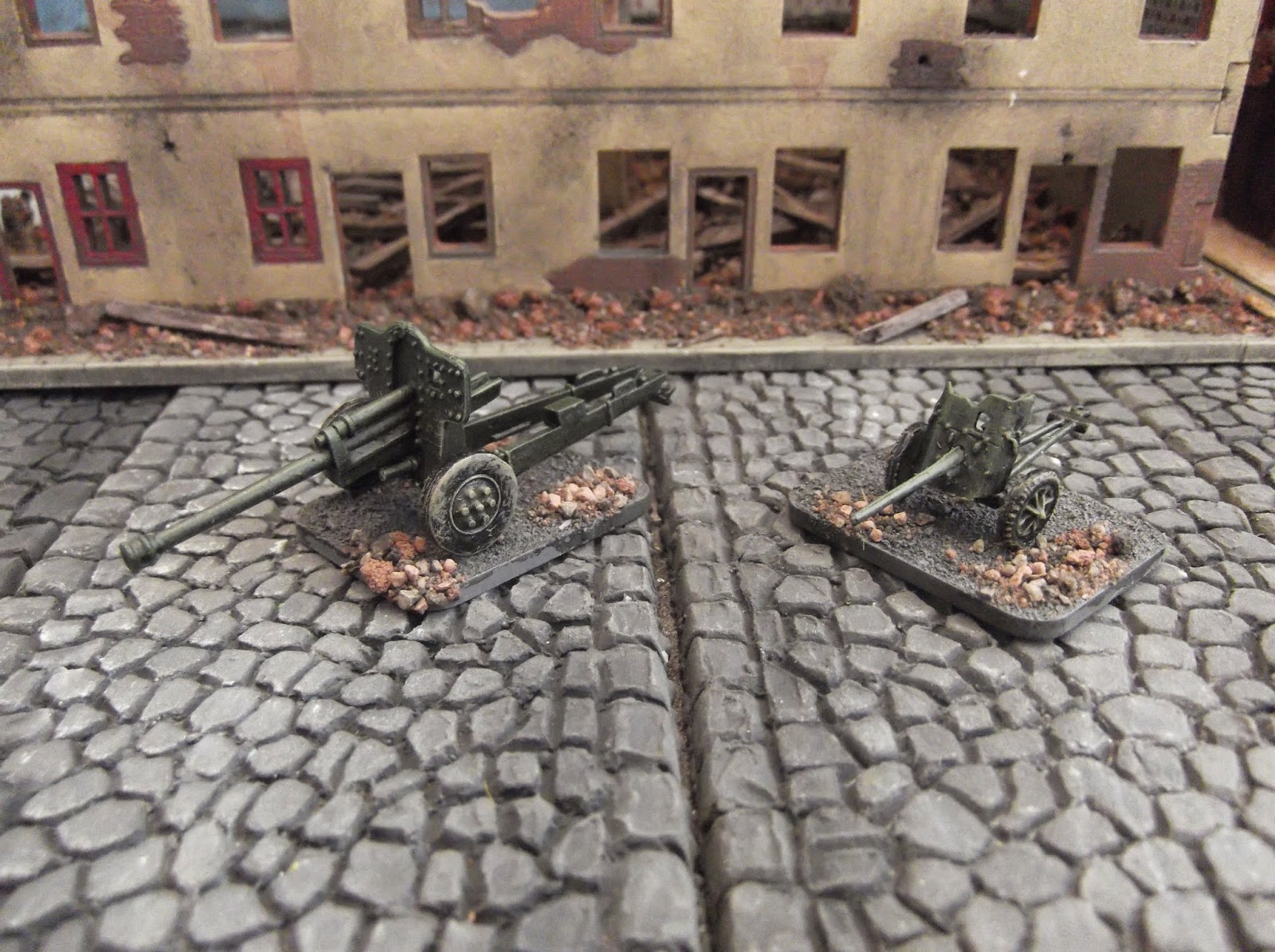 But I can rest happy in the knowledge that the Soviets are finished. I just need to work my way through the remaining German vehicles and we can finally have a game!

Addendum: The Russian guns turns out NOT to be a Zis-3, but in fact a field artillery piece. I have dug out an old PSC Zis-3and will be using this instead after rebasing and repainting, etc... The bloody Russian steamroller seems to be rolling on and on and on...
Labels: 15mm Command Decision Peter Pig Plastic Soldier Company Rapid Fire Russia Soviet Stalingrad WW2