As Monday was a Bank Holiday, Dean's girlfriend had gone to America for three weeks and Ninjasaurus Rex was awake, we gathered together for our first game of Blücher, the new Napoleonics rules from Sam Mustafa. It has been over a quarter of a century since I last played a Napoleonic wargame (besides two games of Shako, fifteen years ago...), so I was looking forward to this as I have also been wanting to get back on the Napoleonic horse for a while.
One of the many good things about Blücher is that there is already a set of cards to use so you can get started right away. No painting the correctly shaded bricoles of thousands of figures. 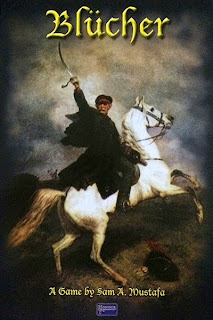 I set up the board as the introductory scenario 'Along the Danube' on the Honour website, but instead of French versus Austrians, the game was 1815 French versus Prussians from the 100 Days Campaign card set. I chose the units that best reflected the units in the introductory scenario and with a bit of fudging we were set. Dean took the Prussian defenders, whilst Ninjasaurus and I took the attacking French. I even got the music right, we listened to the soundtrack for the 1927 silent film Napoleon whilst we played: 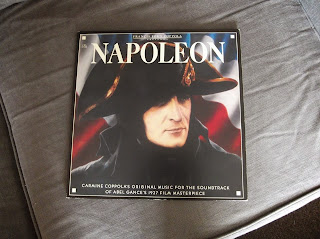 The board was set up as below, with all the units hidden. There was three objectives for the French, the ones on the middle hill and the fields being special objectives. Capture of both of these would automatically end the game as a French victory. 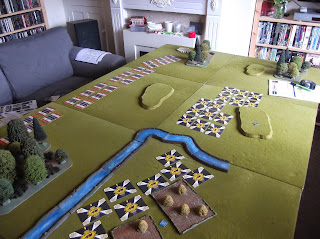 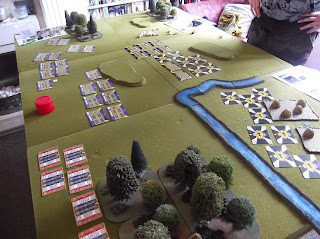 In typical flamboyant style, Dean decided to defend by attacking, pushing forward his right flank, this caused us to put the left French flank in a sate of preparedness. We didn't like the way his cavalry was threatening the infantry. 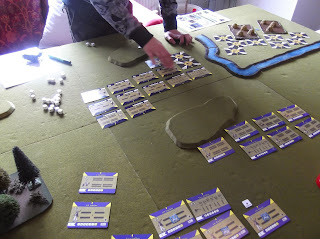 I sent the cavalry Corps charging forward, to crash into the front ranks of the waiting Prussians. I released them far too quickly and should have waited until more damage had been done to these troops before attacking. 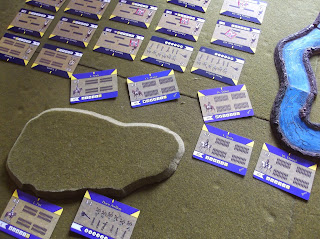 Despite destroying a battery of foot artillery, the other cavalry were repulsed by the fresh Prussian infantry and the French middle broke down into a confused mess. Maybe I should have read about Napoleonic tactics before we started... 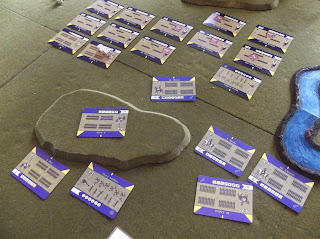 Meanwhile, Ninjasaurus, commanding the left flank, was fairing a little better. He started making advances against the Prussians and made a good show of beating off a Prussian cavalry unit that had attacked. 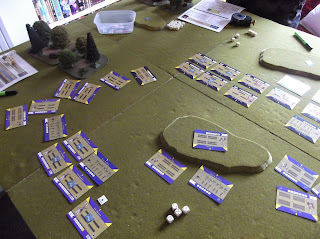 It was time to bring the right flank into action, so I began the slow slog towards the river through the woods. 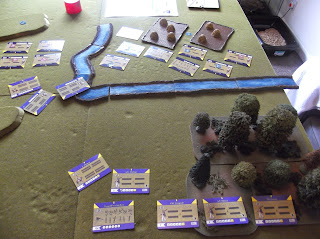 This coincided with the cracks beginning to show on the Prussian right flank, determined French assaults forced them back towards their own lines. 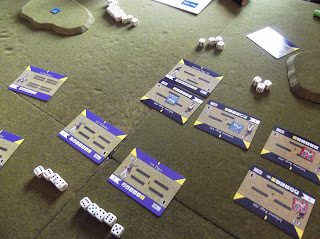 The cavalry attached to the third Corps began harassing the Prussians on the river bank and charged the guns, destroying them. 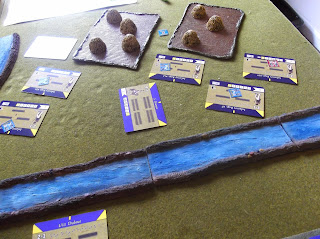 Further French attacks on the left flank smashed the Prussian defence, combined brigade attacks seemed to be winning the day! 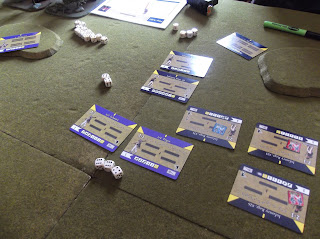 Combined with assaults from the cavalry the entire Prussian right flank collapsed under the weight of the attacks. Most of the defenders were now in no fit state to continue fighting. 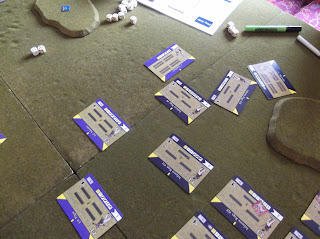 Meanwhile, on the right flank, the French infantry charged across the river and into the waiting Prussians holding the fields. 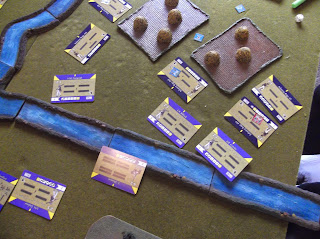 The ninth Prussian unit was lost, this signalled the collapse of the entire army's morale (it was level seven), and the game was declared to be a French victory. 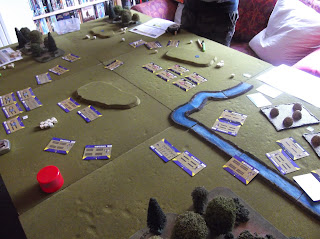 It was over, but it was close. We lost five French units, so were close to breaking as well. I also learnt a lot about Napoleonic tactics, battles should be attritional until breaking point then send in the cavalry. Unsupported cavalry attacks against fresh infantry just don't work... This is why my cavalry corps ended up floundering about in the centre of the field like headless chickens. Each attack brought them more fatigue and closer to their breaking point.

Overall, we all enjoyed the game, it played well with a good feel for the period and, as I mentioned, we could all hold the rules in our heads by the end. I think we probably missed out a few bits and pieces, but that is always the way with first games. It won't be long before we're playing another game of Blücher, I am sure.

Then Clare joined us for a couple of games of Thunder Road, the 1980s Mad Max inspired board game by MB Games. I was bought this game for Christmas back in 1987, but haven't played it since. Dean had picked up a cheap copy on EBay and has been repainting it in the last few weeks. Here are some pictures of the car carnage from the two games we played (Clare won them both...). 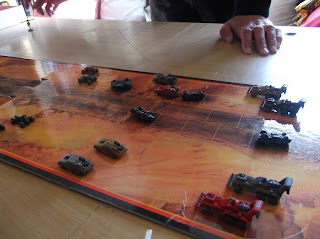 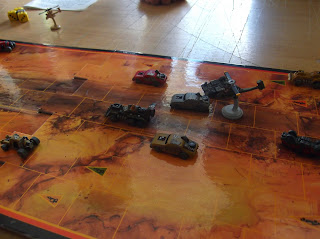 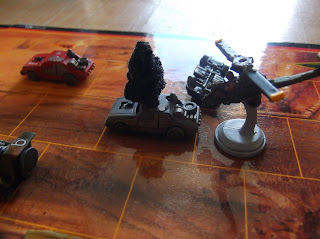 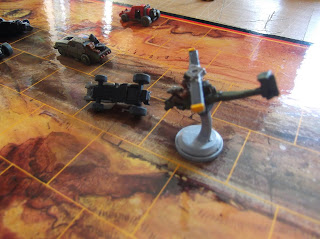 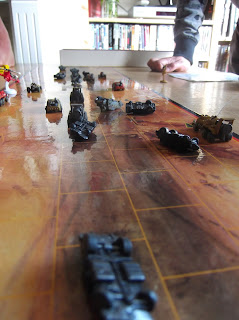 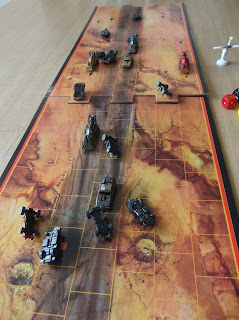 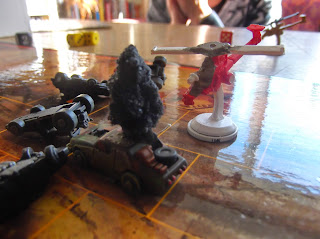 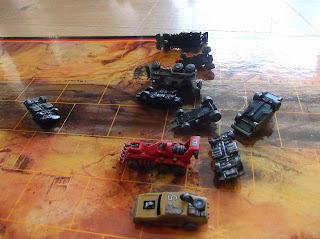 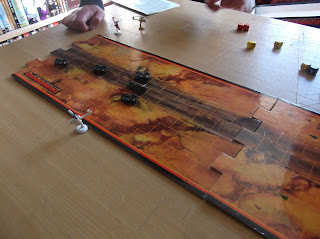 As I mentioned, Dean has been painting the cars, here is the excellent job he did on the team I used, inspired by Second World War Germans... 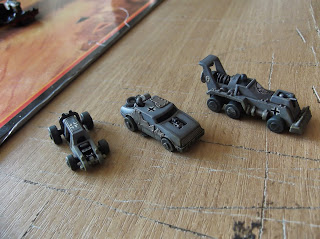 A bank holiday full of gaming, not a bad way to spend a Monday! Thanks for reading!
Labels: AAR Blucher board games Napoleonics