Recently, Dean bought a copy of Zombicide, the game of the zombie apocalypse, it was delivered on Saturday morning and he brought it over for an afternoon of zombie killing with myself and Ninjasaurus Rex. As a teenager I was a fan of the old school zombie films, like Romero's original Living Dead trilogy and my all time favourite Zombie Flesh Eaters. There was a time when I collected particularly bad zombie films on DVD. If you ever get a chance, Oasis of the Zombies, which features Afrika Korps Zombies, is definitely worth a watch... However, I do think that the zombie theme is a bit overdone these days, with zombie films ten a penny. Give me the schlocky Italian splatter movies over slick running zombies any day... So, I ribbed Dean a bit about the game, but did secretly look forward to playing it.


This game has been around for a long time (2006, I think?) and is very well supported by numerous additions and a very good website (check the link above), but being that it was the first time I've played it, this is kind of a review for anyone interested in checking it out.

Immediately it was apparent that this was a well produced game, even the box art was high class and eye-catching. 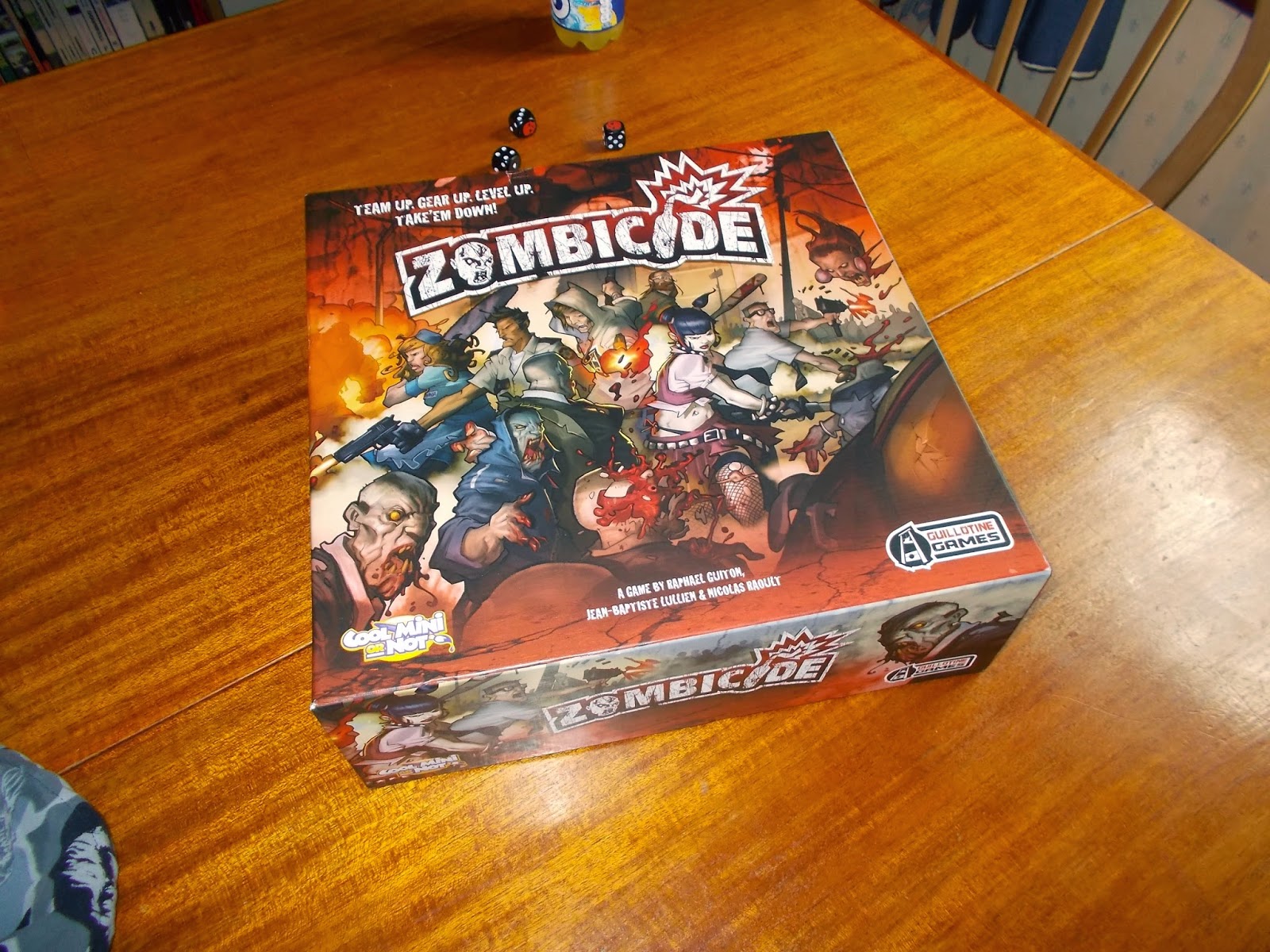 And inside it was packed with card stock counters and other bits and pieces. The rules are laid out in a very attractive booklet full of game examples and ten scenarios. There is also several packs of cards, used to activate zombies and equipment that the characters can use. 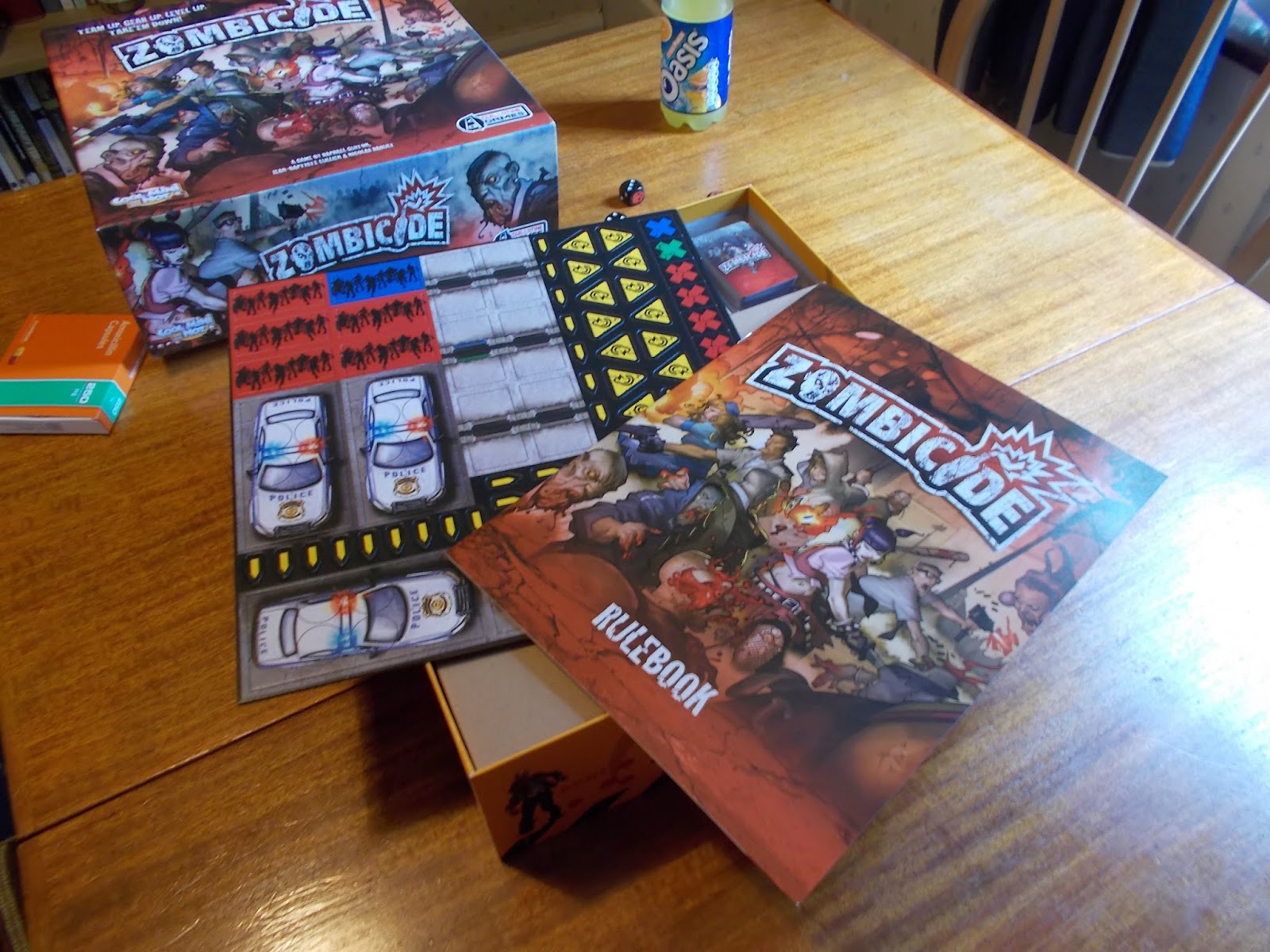 Then we get to the figures. We didn't measure them, but they look to be about 28mm, six of the hard plastic minis make up the player characters, in their individual colours and in good poses. These should paint up very well. The seventh figure here is the Abomination, kind of a boss character, who may or may not appear in games, depending on the draw of cards. 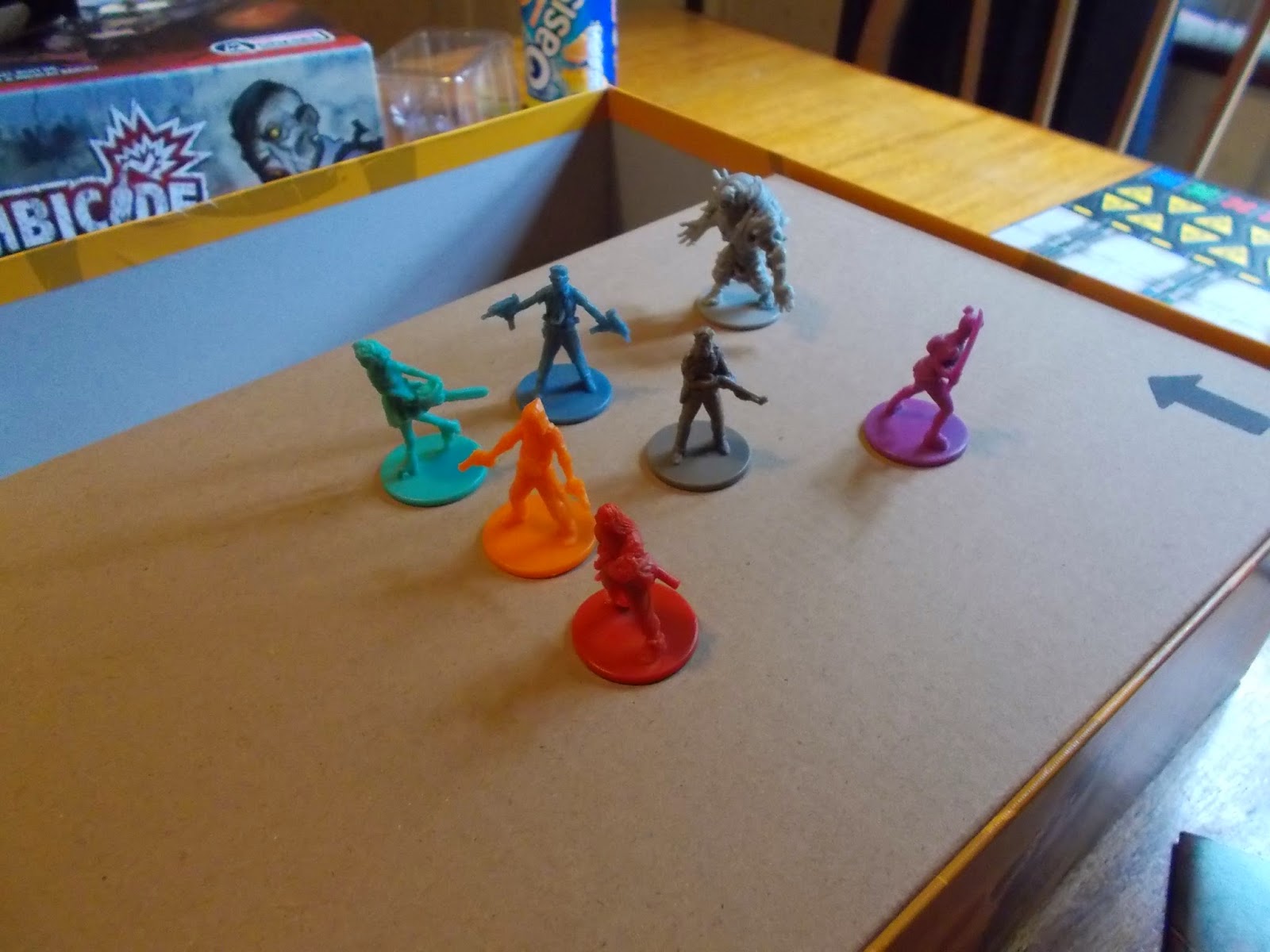 The rest of the box is made up of 64 zombie figures, in three different types, walkers, runners and fatties and the card stock game boards. The zombie figures are worth the price of the game alone, they really give a good feel for the hordes of unstoppable dead and there is a lot to fill the board with. 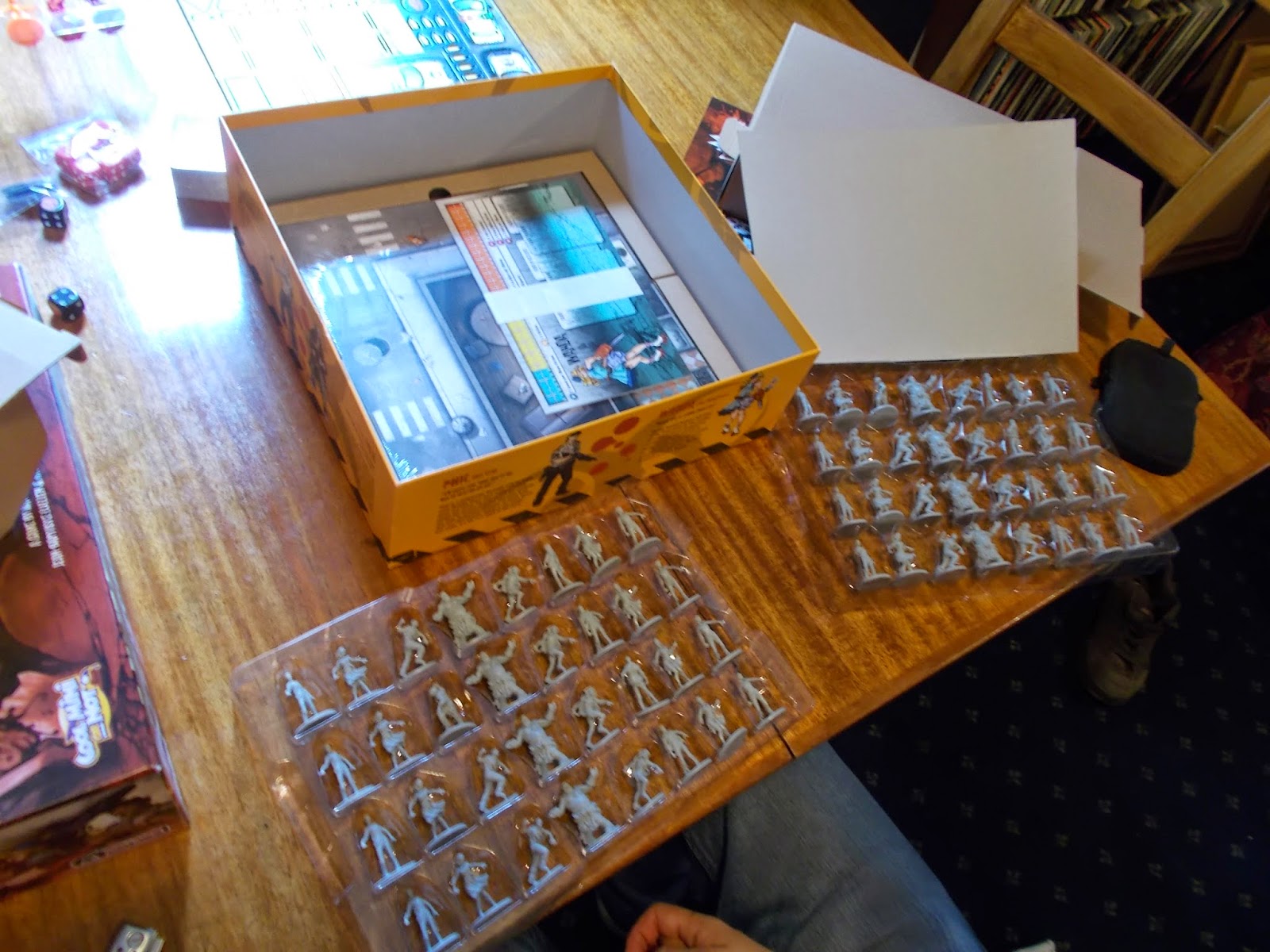 The card stock game boards feature streets and buildings and can be put together in many combinations, again the artwork on these is full of tiny details and they really bring the whole game together. 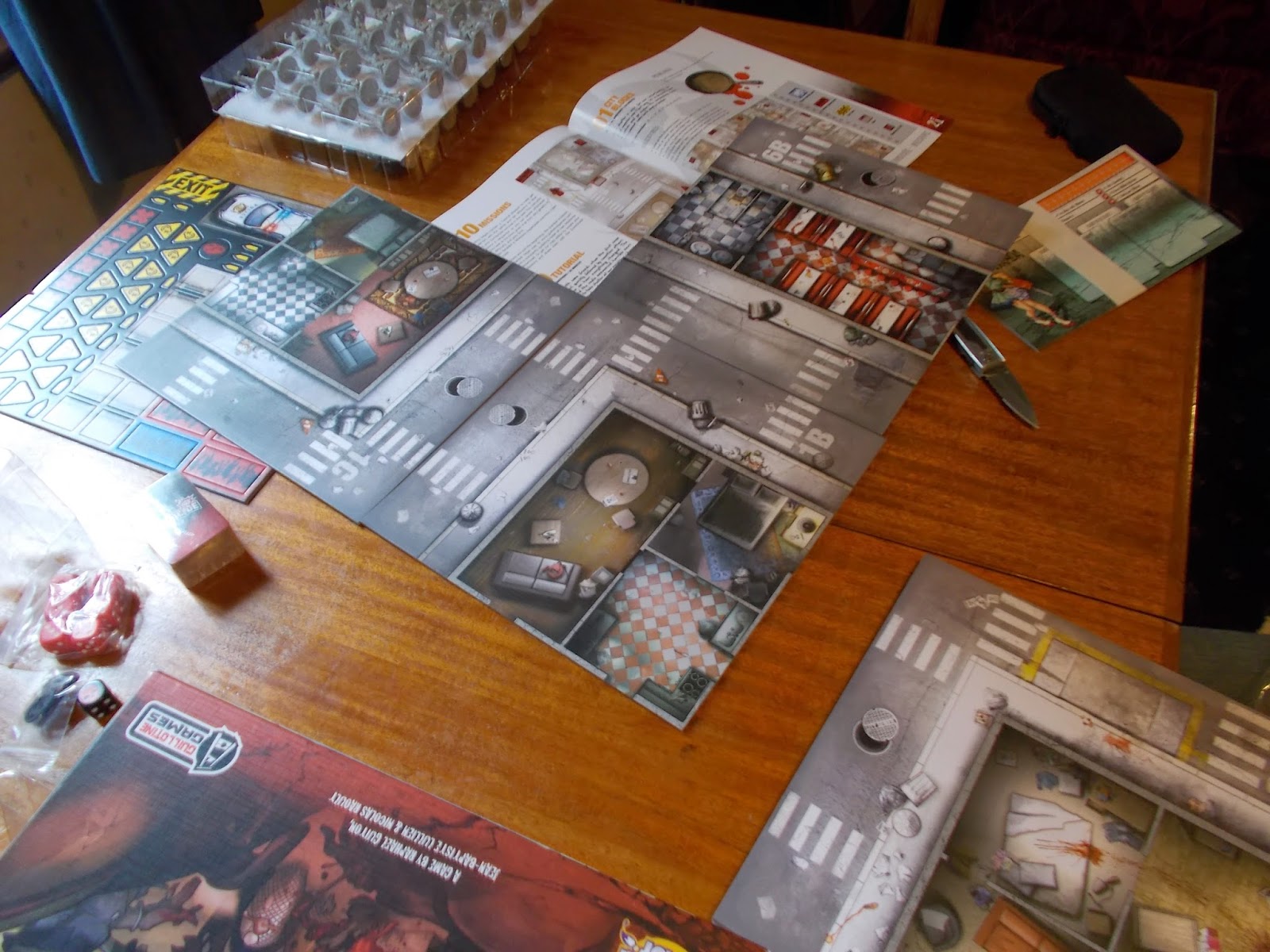 We jumped straight in, with Dean reading the rules as went along, on the first introductory scenario. In this game the team of survivors had to cross the street to reach the neighbouring building and make their way into the room with the red X in it.

We each took two characters, I had the roller-skating Wanda and the wino looking Ned. Each character has a certain number of actions, with the occasional free one or extras; Wanda, could move two spaces for the price of one and Ned had a free search action (probably looking for a bottle of white spirits). Player's actions create noise and this in turn attracts zombies, who appear according to the turn of cards and at certain spots on the board. Here the team fight it out with a couple of walking dead in the street, just before we broke into the house and reached the goal with no casualties! 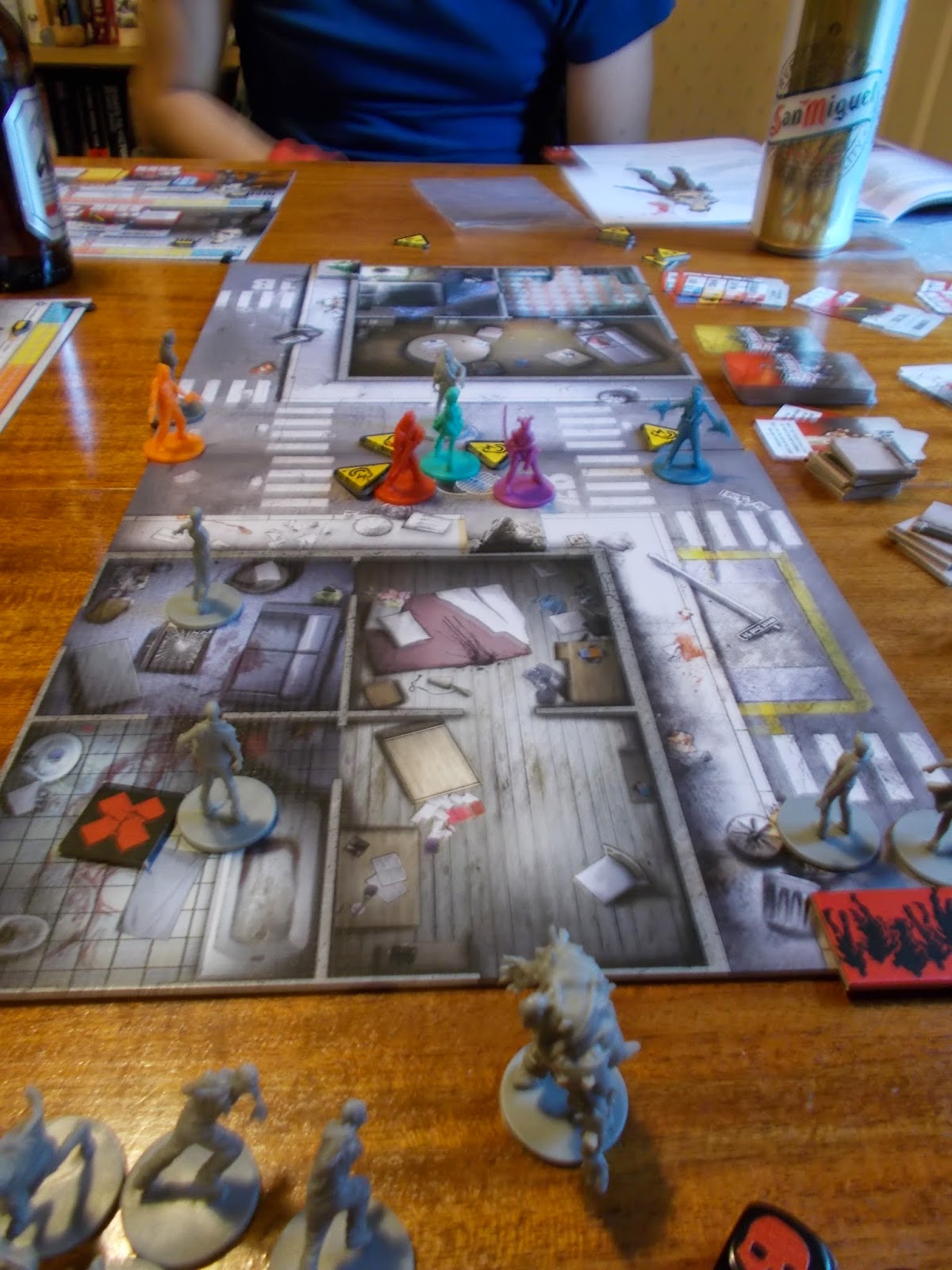 With a good idea of how the game mechanics worked (and very smooth they are) we took the game up to the next notch and played the next scenario which took place over nine game boards. Here, the survivors were bunched up in the centre of the board and were tasked with reaching six objectives before exiting the game board carrying a variety of objects (water, food and other supplies). Unfortunately, we pulled the Abomination card really early and the lumbering beast threatened us at every turn. Smaller zombies are easy to kill, but this beast takes special weapons to take down. Despite searching almost every room we were in we never found a weapon powerful enough to kill it! 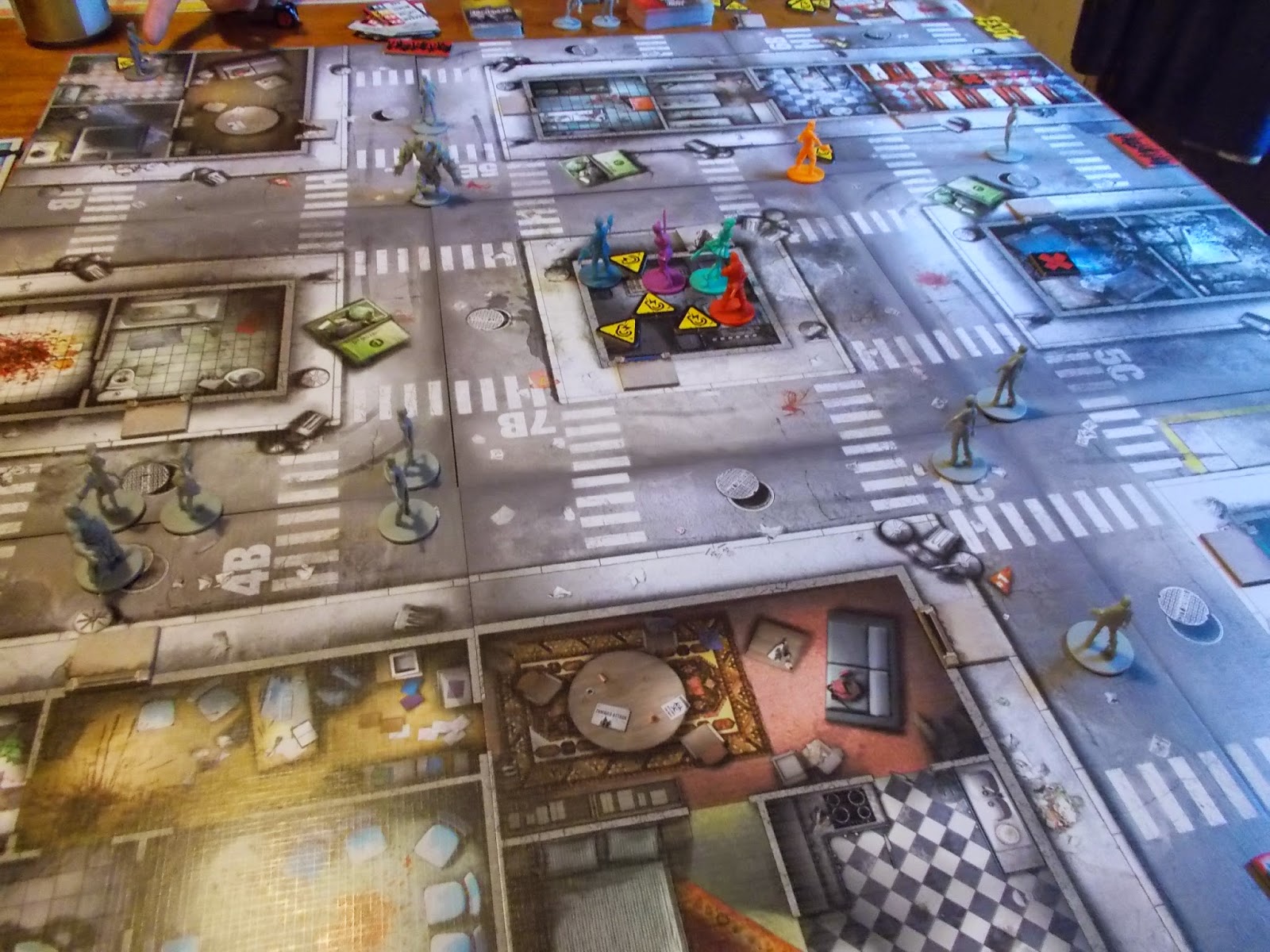 Every time a team member breaks into a new house, cards are pulled to see how many zombies are present inside. With the objectives buried deep within buildings there was a lot of zombies wandering about inside and it looked like there would be a very bloody battle to get to where we needed to get to! 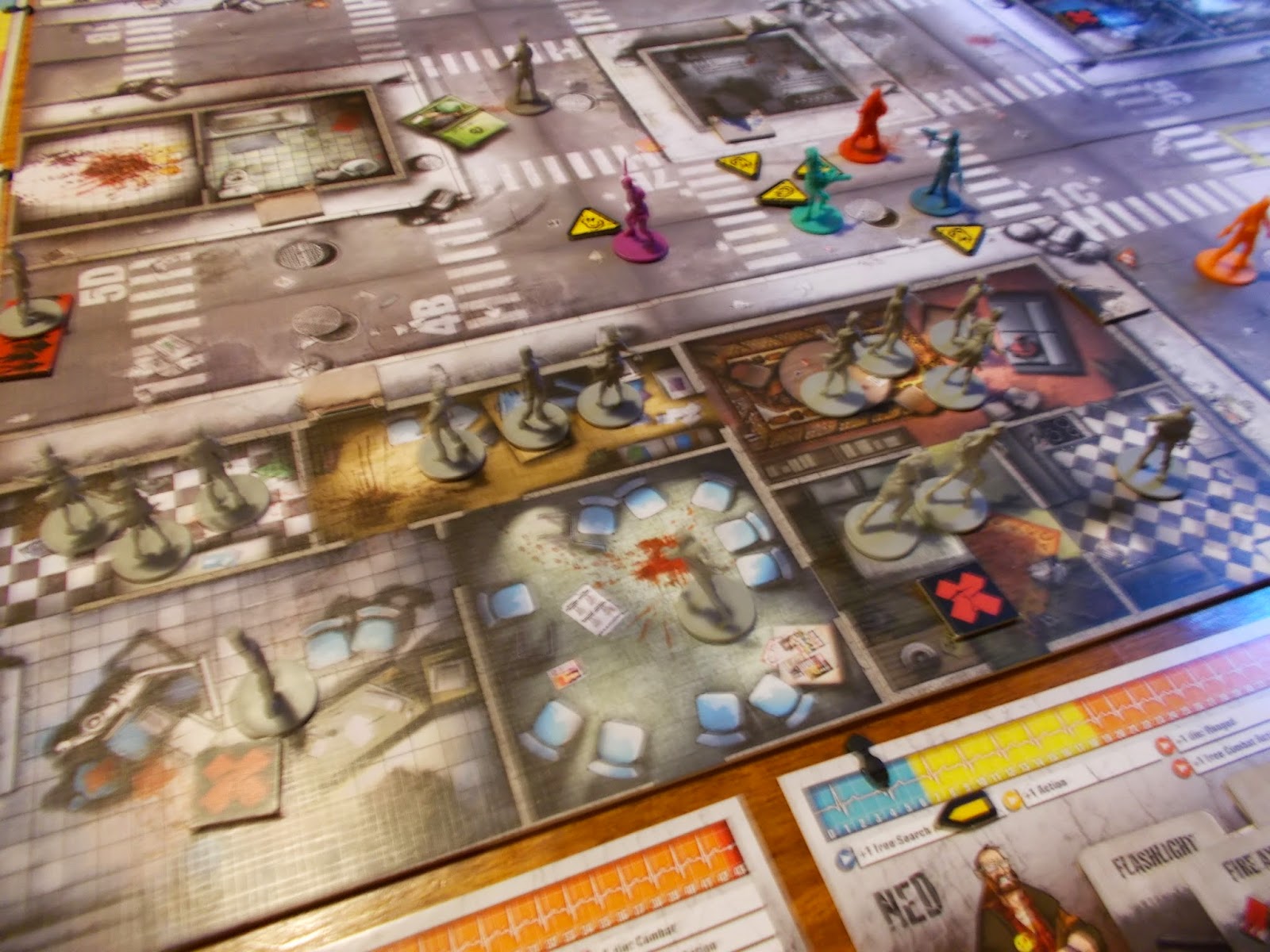 The game progressed with the team picking up a couple of the objectives, but the amount of zombies quickly became overwhelming. 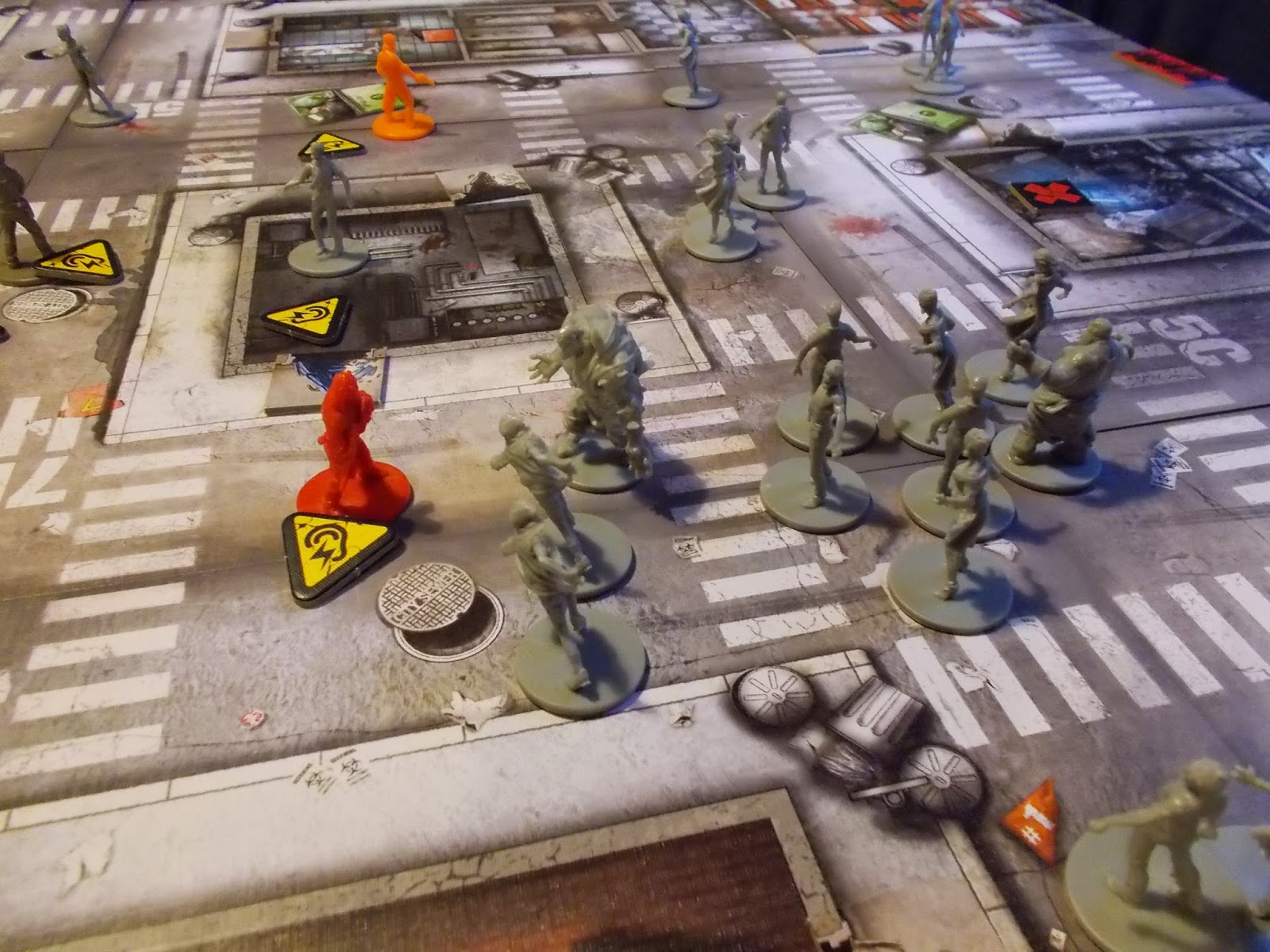 Despite going at the dead with an axe, one of my characters, Ned, was surrounded and definitely outnumbered. 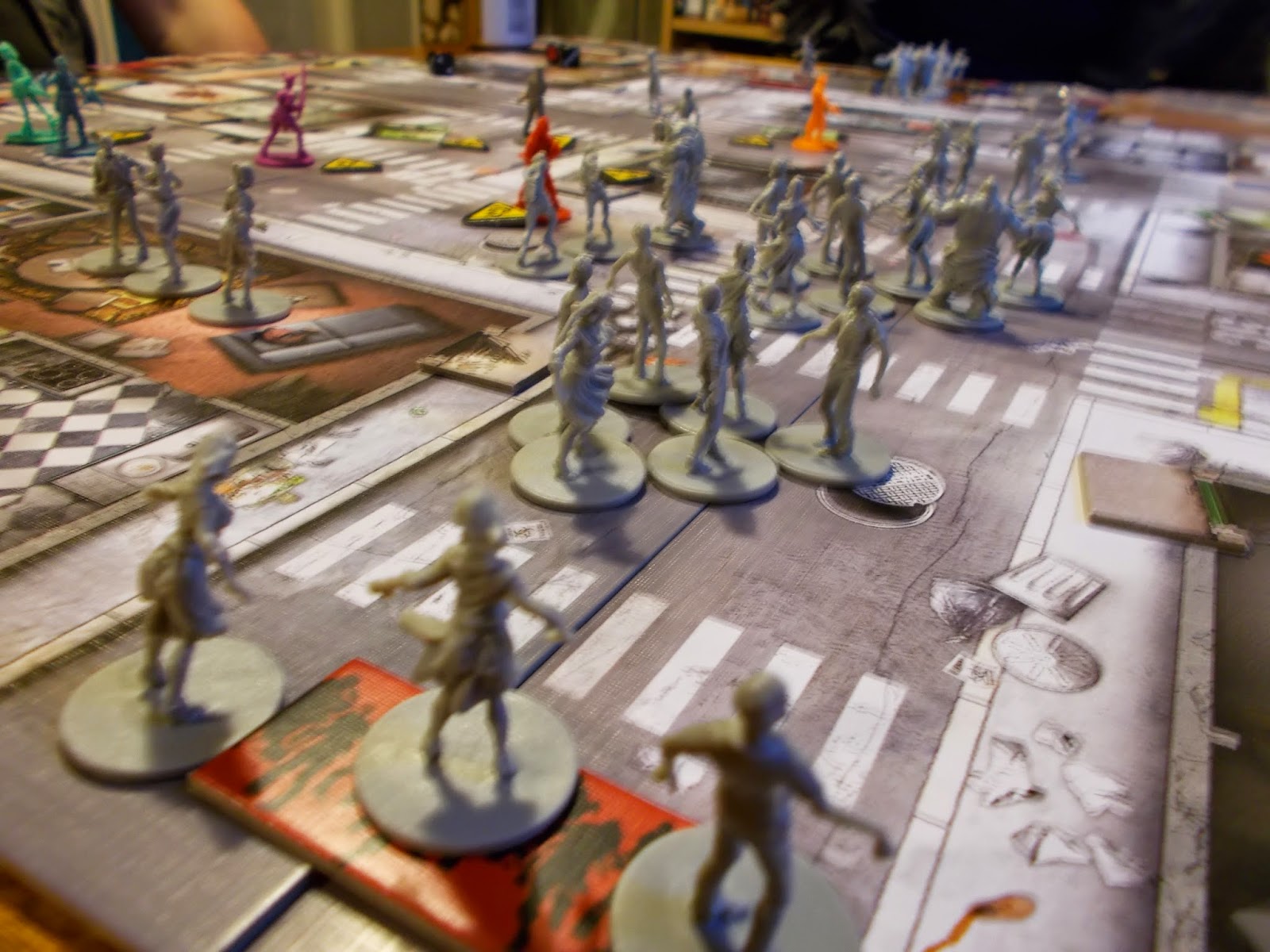 His last stand was pitiful to see, the Abomination lead the attack as he was pulled to pieces in the street by the unstoppable horde. At least he died standing up and fighting. 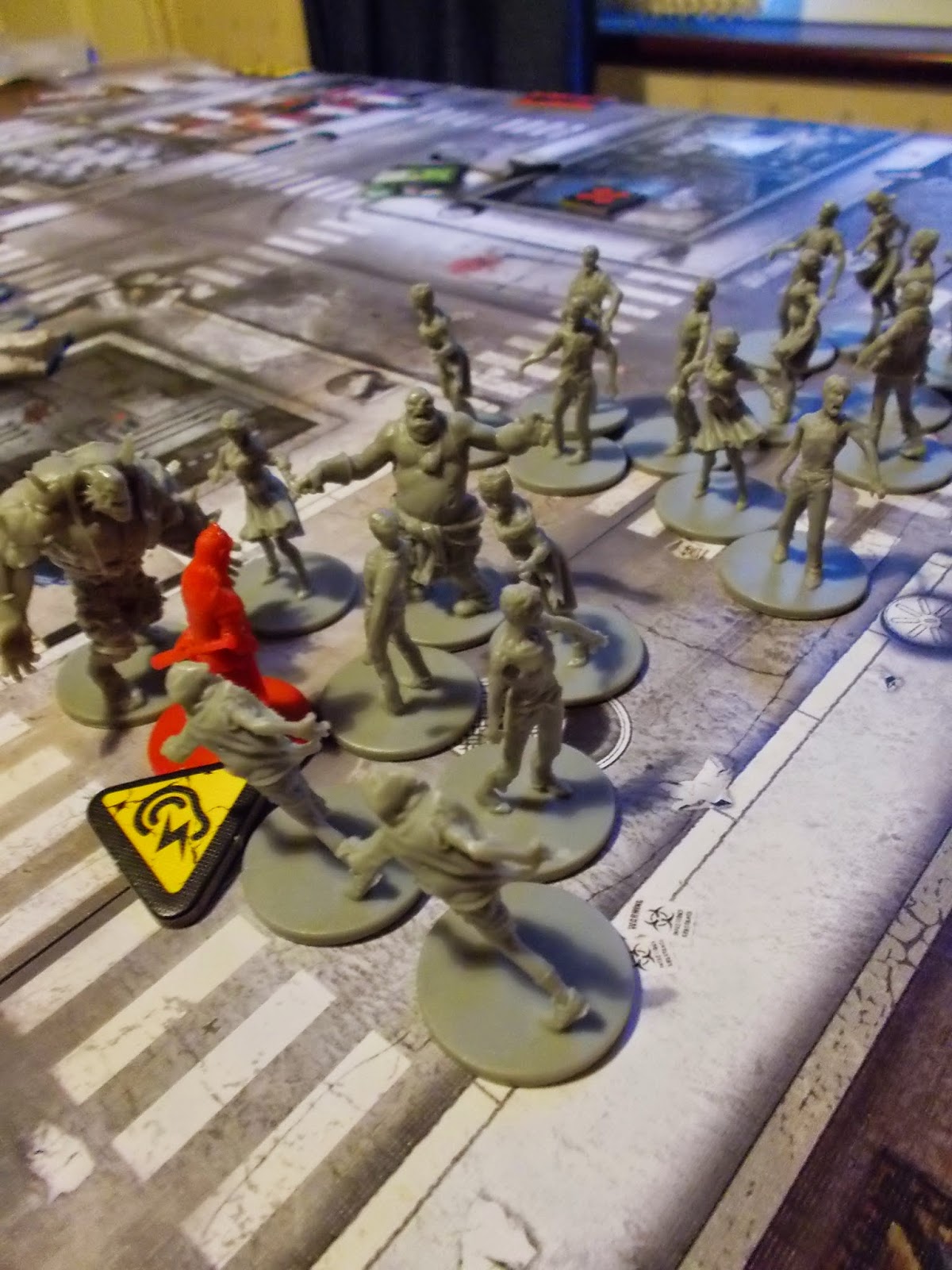 We ended the game with the board looking like this. My other character, Wanda, had got hold of all the objects needed to win and was waiting by the exit. However, the other characters were cut off from getting more objectives by the massive swarm of walking dead led by the Abomination. 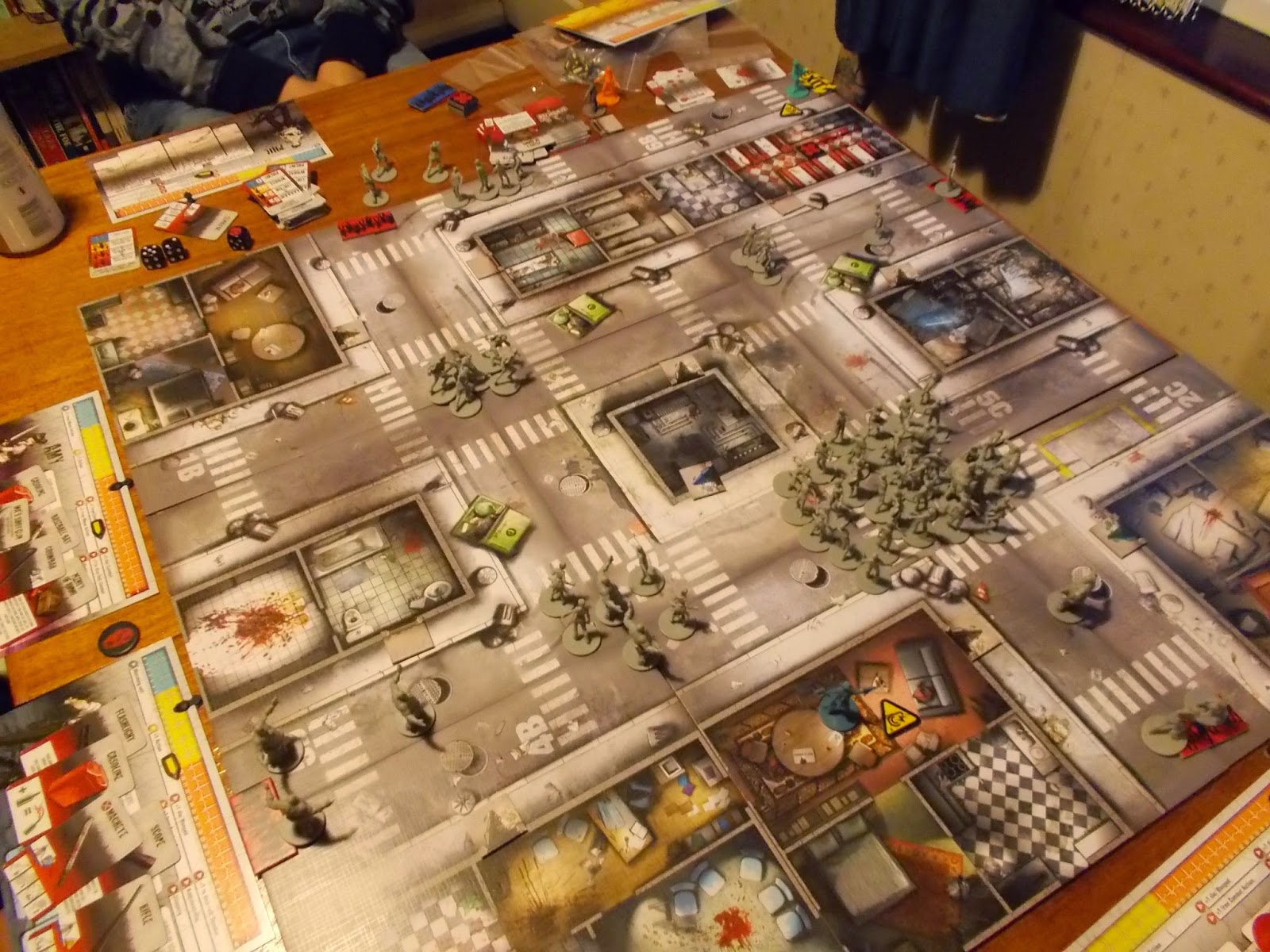 So, in conclusion, the game was excellent. It had a really good 'few against many' feel and the unstoppable horde of zombies never stopped coming, which made the game feel claustrophobic. In that respect it had a lot in common with Space Hulk, another exciting board game, developed back when Games Workshop were good at making games. It took until about half-way through the second game that we realised we shouldn't be spending time shooting zombies, but actually try to outrun them and grab the prizes. There also needs to be a certain amount of sacrifice within the team, to distract the horde whilst a couple of characters gather the objectives. We tried sticking close together, strength in numbers and all that, but this diluted the different traits in the characters too much.

I am looking forward to my next chance to try out different tactics and seeing how the team face the deadheads again...
Labels: Board Game Review board games Zombicide Zombies