Doesn't time fly when you're modelling a wrecked building? Welcome to part four of this seemingly never ending build.
You can catch up with what I have done so far in PART ONE, PART TWO and PART THREE. Also check the inspiration for this at Ninjasaurus Rex's BLOG.

I turned my attention to the interior and the rubble on the bottom floor. I neatened up all the painting, using brick red for the rubble. I then washed the entire thing in Green Grey by Vallejo. This was dark enough for contrast but not too dark to be black. I also washed the walls with the same colour and left it all to dry. 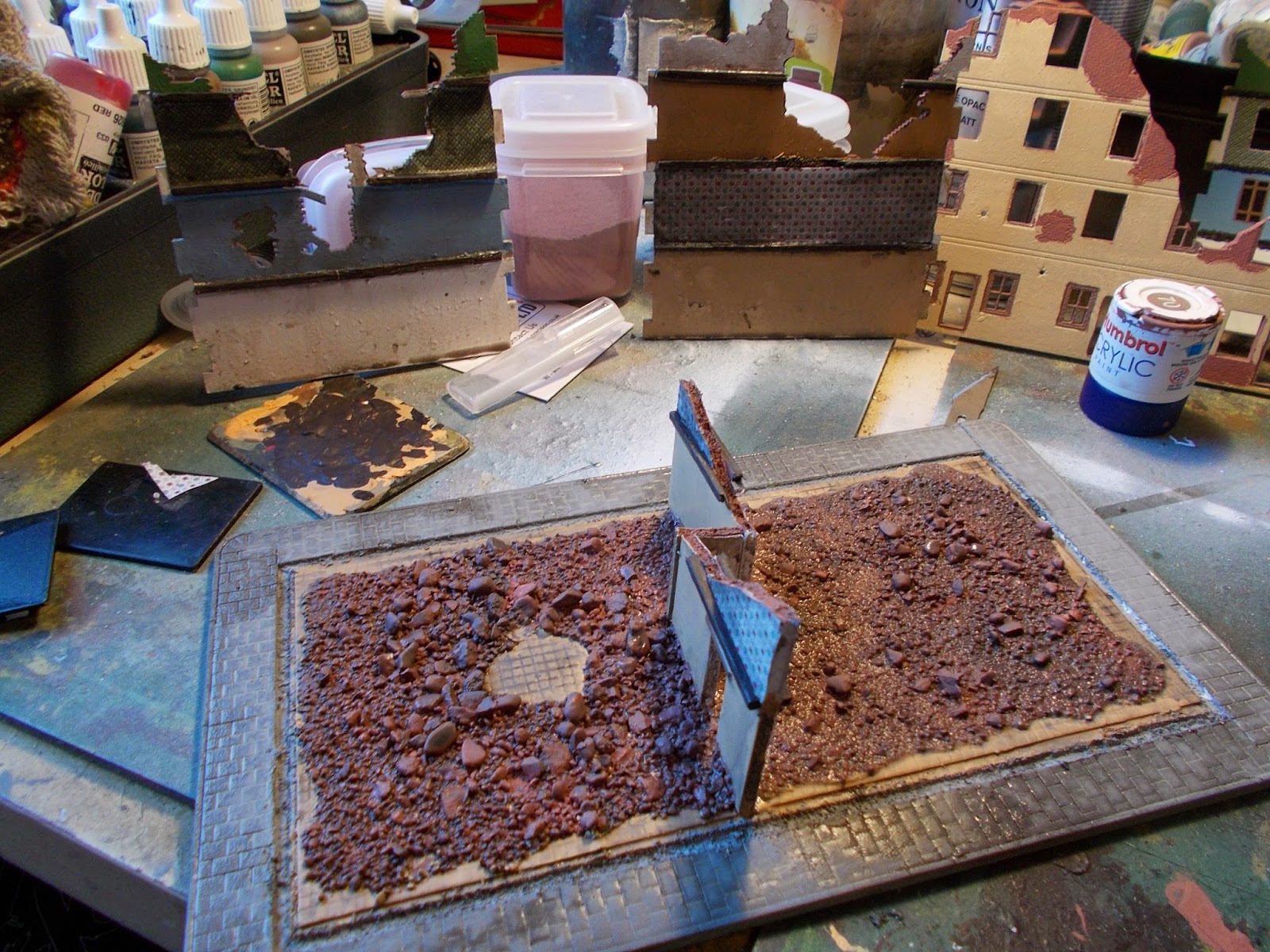 I actually washed all the interior walls as well, but stupidly forgot to take photos! You'll have to take my word for it. Once the wash was dry on the rubble, I gave it a dry brush of some sandy yellow, I forget the exact Vallejo paint I used, but it doesn't really matter. This then gave the rubble a bit of contrast. However, this part is by no means finished, this was just the stuff I won't be able to get to once the walls are fixed in place. Watch this space... 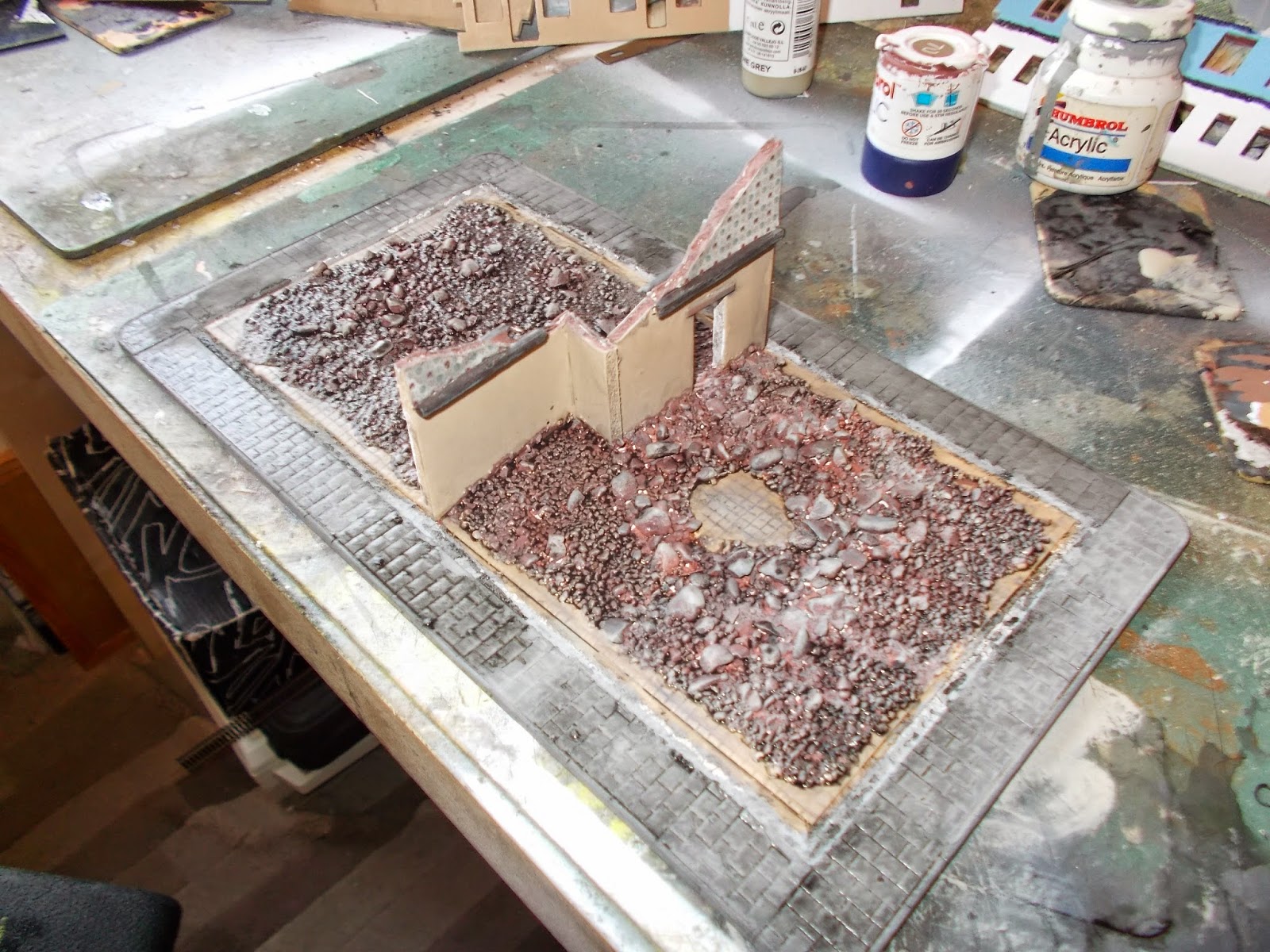 Further weathering was needed for the walls, the wash looked OK, but I wanted a dusty appearance. This would be done with weathering powders. Rather than spend a small fortune on commercially produced ones, I followed Ninjasaurus' lead and made my own. It is literally a mix of tempera paint of the correct colour with Plaster of Paris. The plaster will lighten the tempera, so bare this in mind if you make your own. I used black pain and got a grey colour. I wanted grey anyway, as it's the right shade for dust. 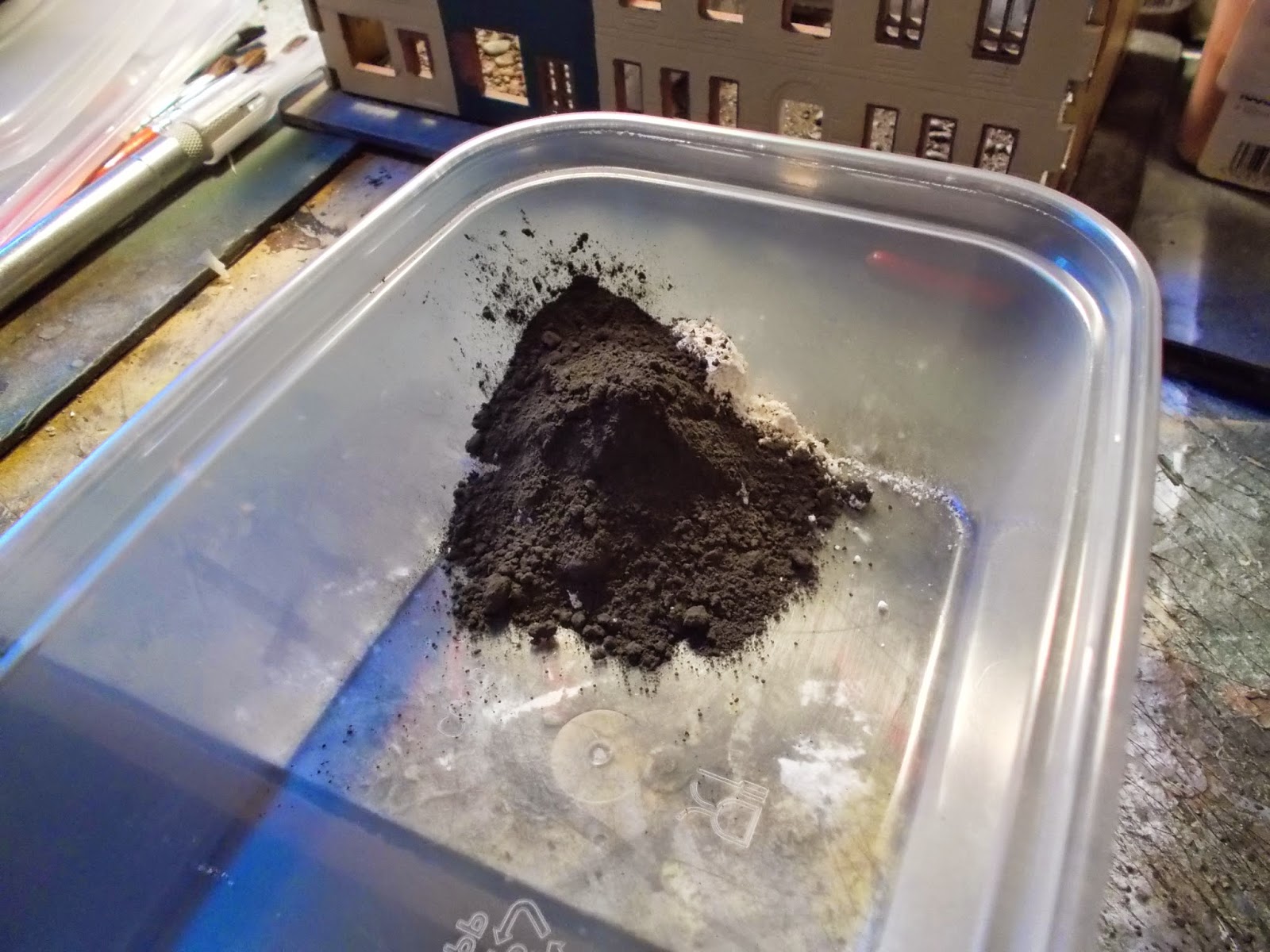 Then, with a big soft brush the powder was dabbed onto the walls and allowed to fall off naturally. Here is the interior wall with the powder applied: 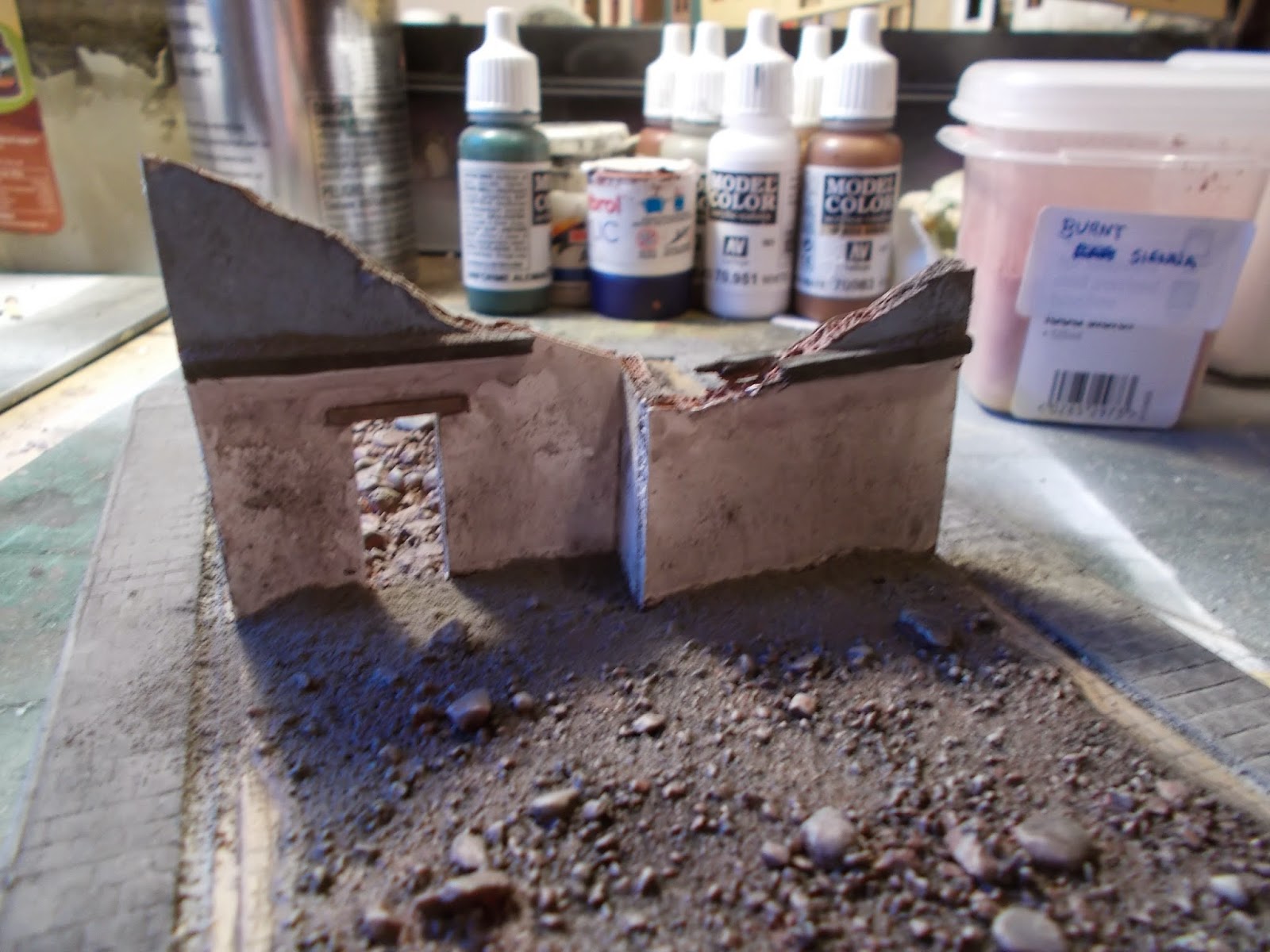 And the other walls, all done in the same way. You can't really see in the picture but the powder gives the walls a 3D appearance which can't be done with the wash alone. Ninjasaurus did tell me after all this that he didn't even wash the walls in his building and just applied the powder. I will try that with the next building I make. 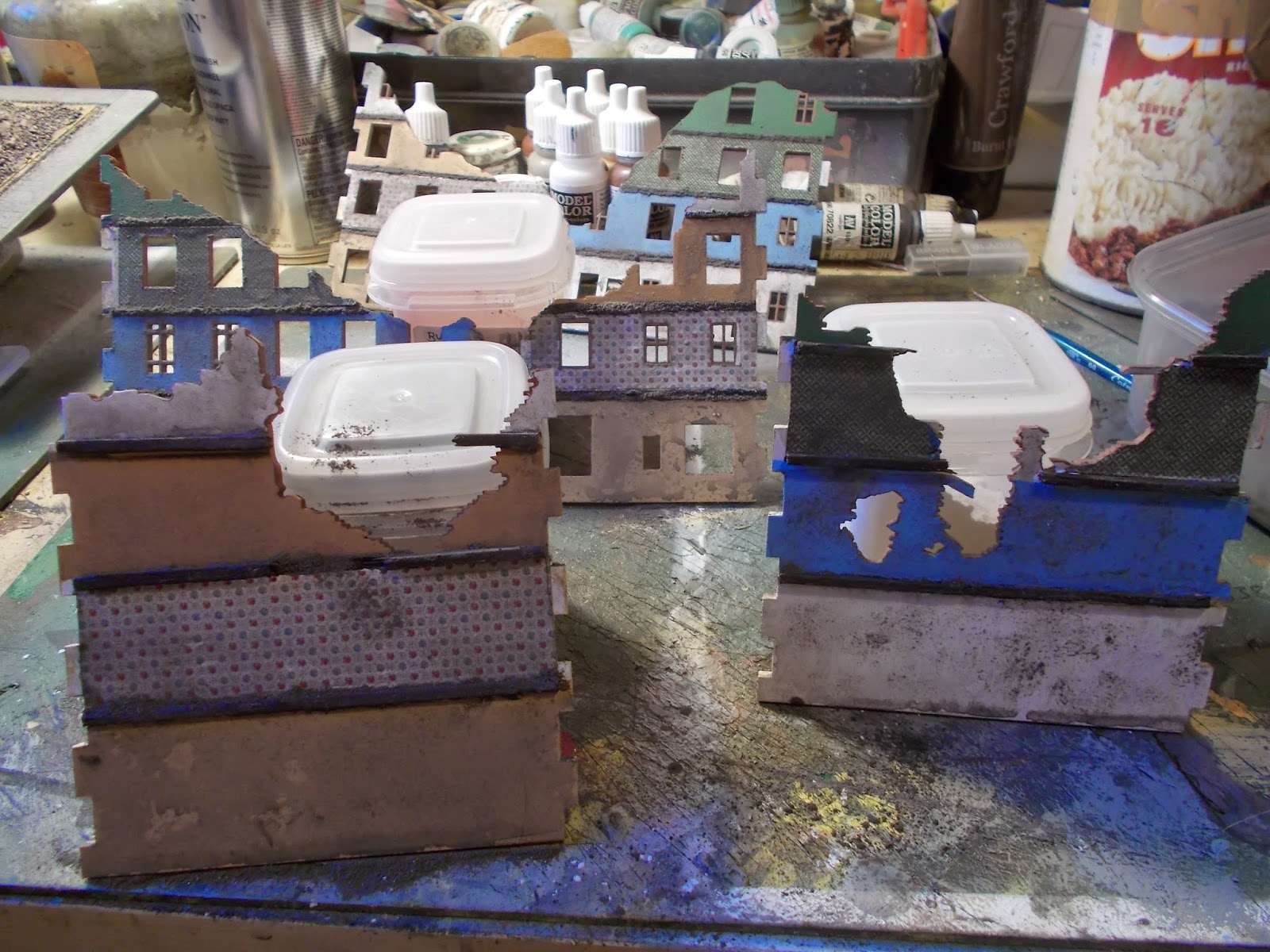 Then to seal the powders in place I spray varnished the walls. Once this was dried I drybrushed all the details, like the wooden beams on the walls and the floor levels that I created with sand. Also added at this stage was a thin wash of brick red around the windows and top edge of the ruin. That was it for weathering the interior, so I glued the walls together and then stuck them to the base: 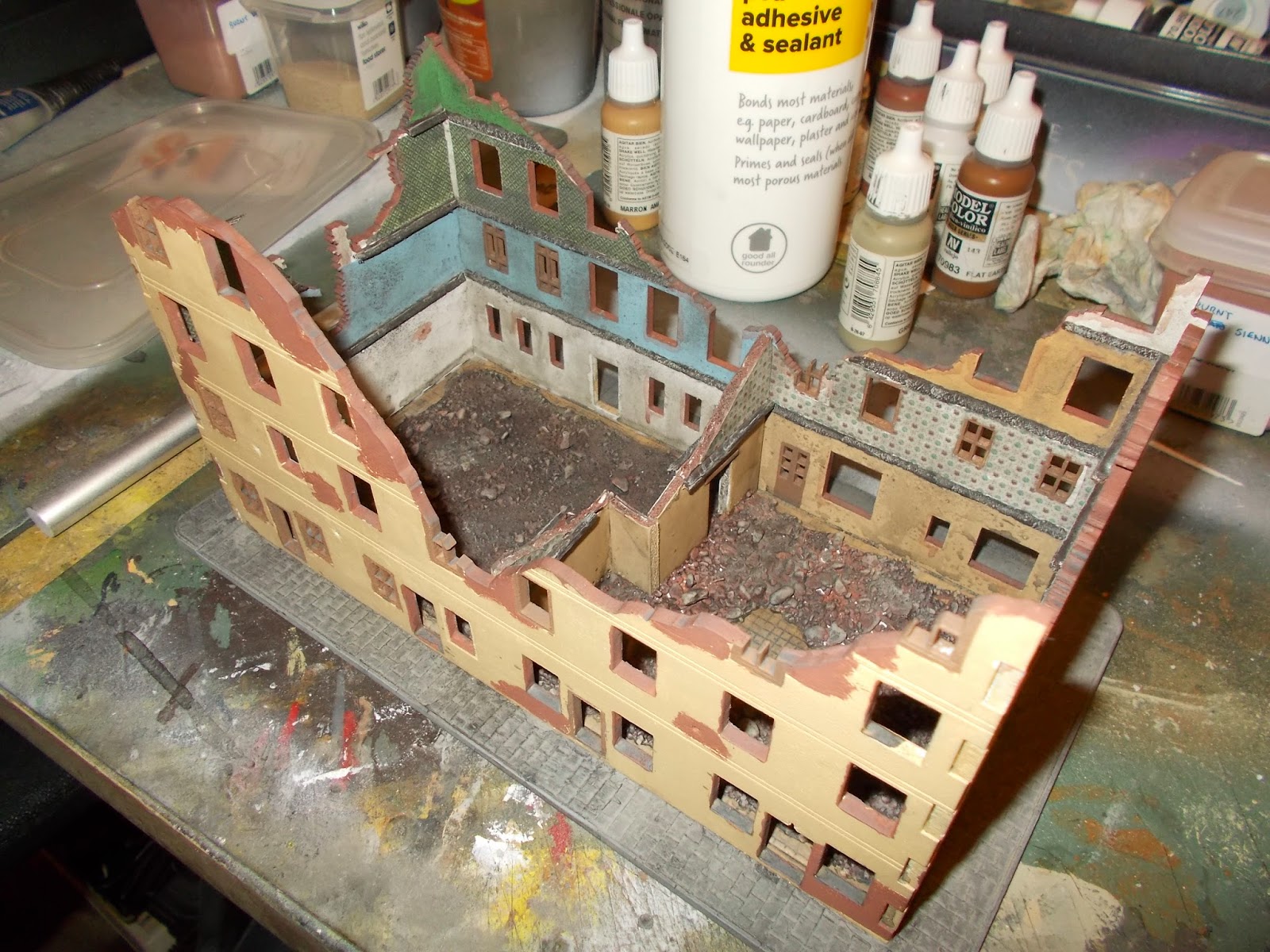 Then I re-painted the exterior walls, this was really just a case of neatening up the brickwork showing through the plaster and painting a few splashes of colour on the doorways and a few windows. I also painted one of the shop frontages green, to make it stand out from the rest and break up the face of the building. detail was also added in some of the decoration being painted, again, just to break up the façade. I painted the plasterwork in Iraqi Sand, just to prove to Ninjasaurus that I don't paint every building grey, which is a criticism he always levels at me... 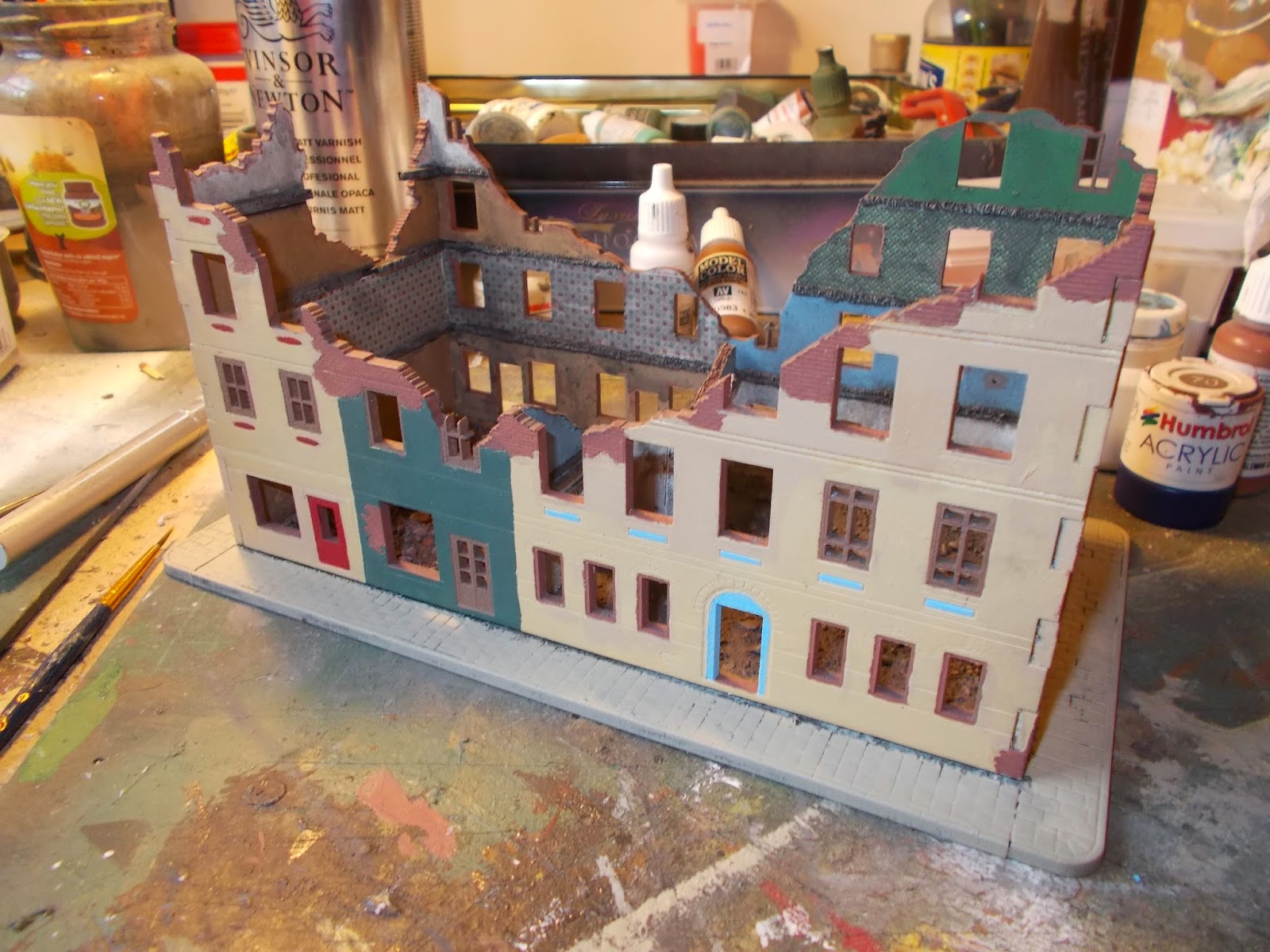 Once this was all dry, I washed the walls in Green Grey again and left it to dry. This was just the right shade to dull down the bright paint. 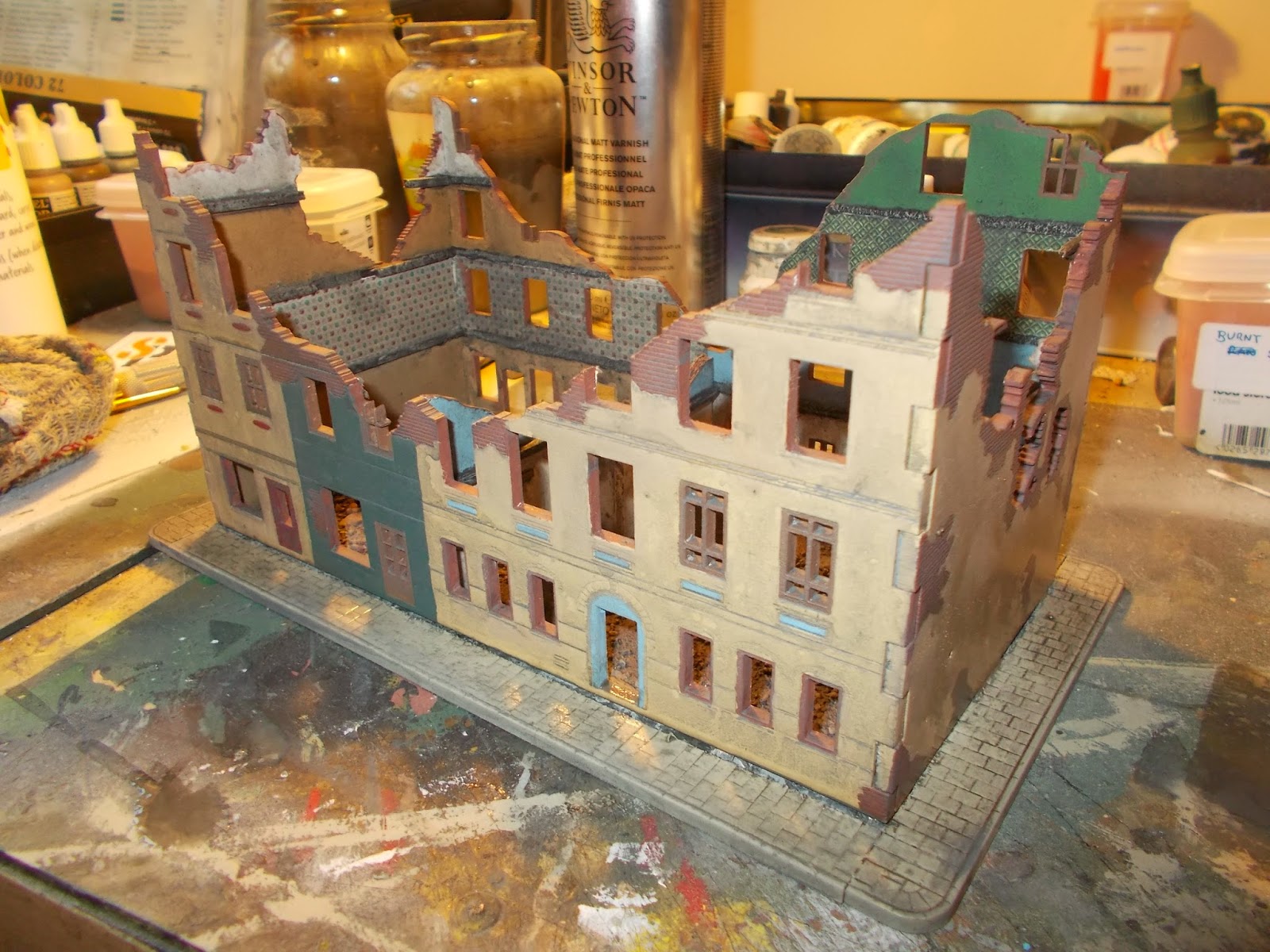 Next up was to add a bit of detail, as two of the building frontages looked like shops/restaurants I decided to add some signage to them. A friend had already directed me to this BLOG, which is an excellent resource for World War Two posters and things, and imprtantly for this project also had some Russian restaurant signs. Look all the way down the comprehensive list until you see them. They are supposed to to be for 1/35th scale, but look fine when scaled to the correct size for positioning on my building: 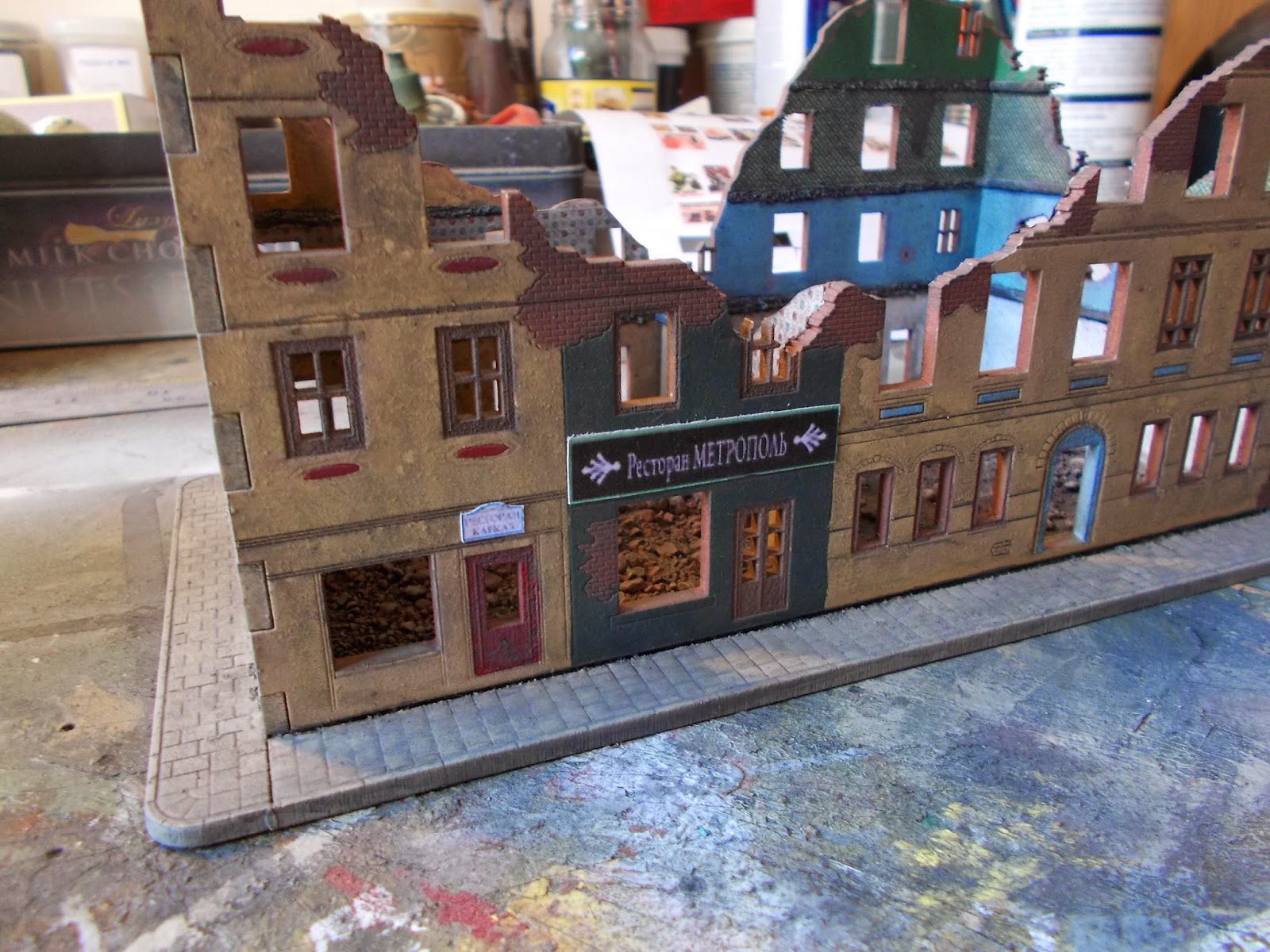 Then it was into the final straights, I used the weathering powders on the outside of the building, here's the front and left side: 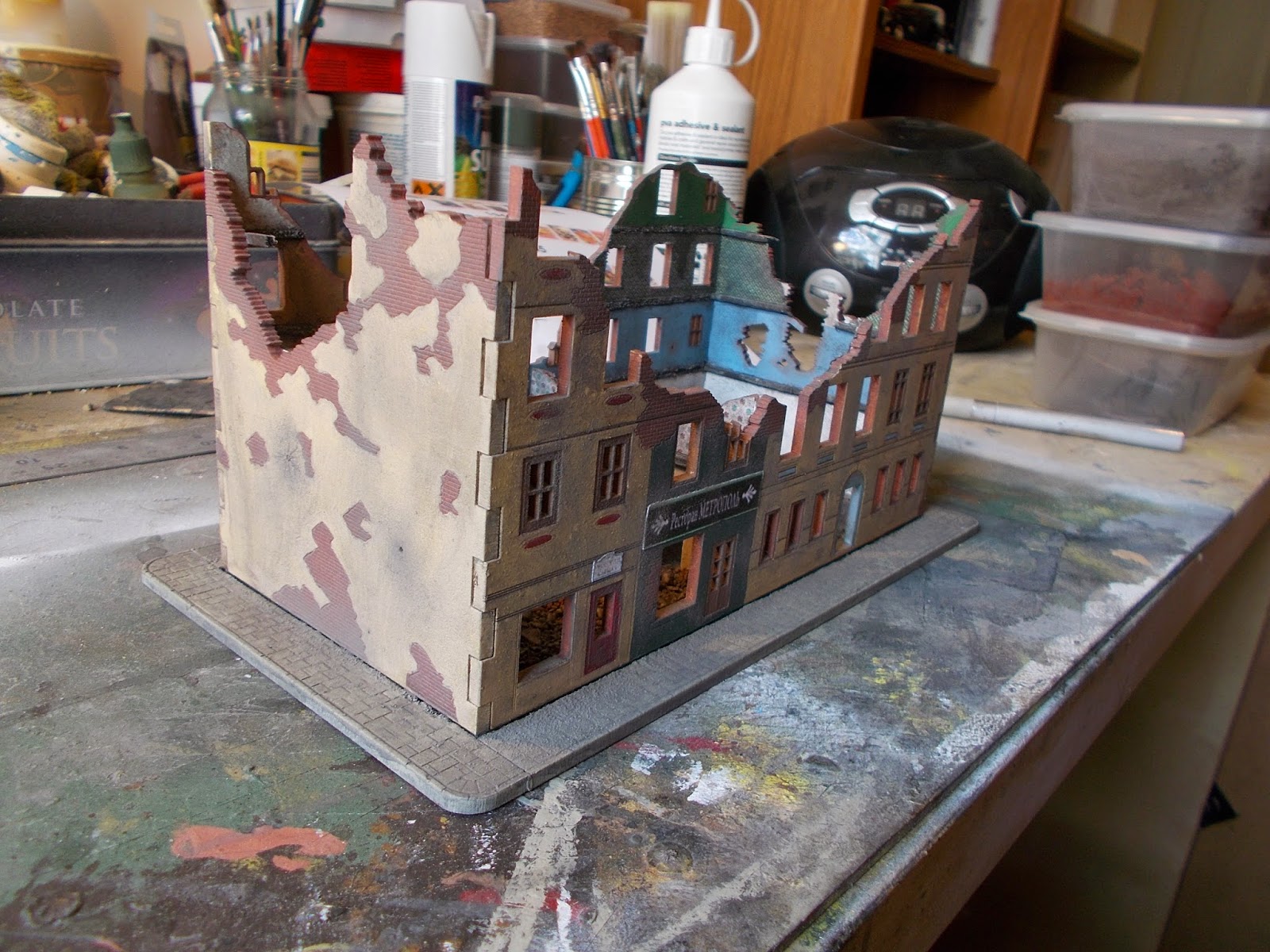 And the rear. I then gave the whole thing a liberal spray of matt varnish to fix in the powders and left it to dry. 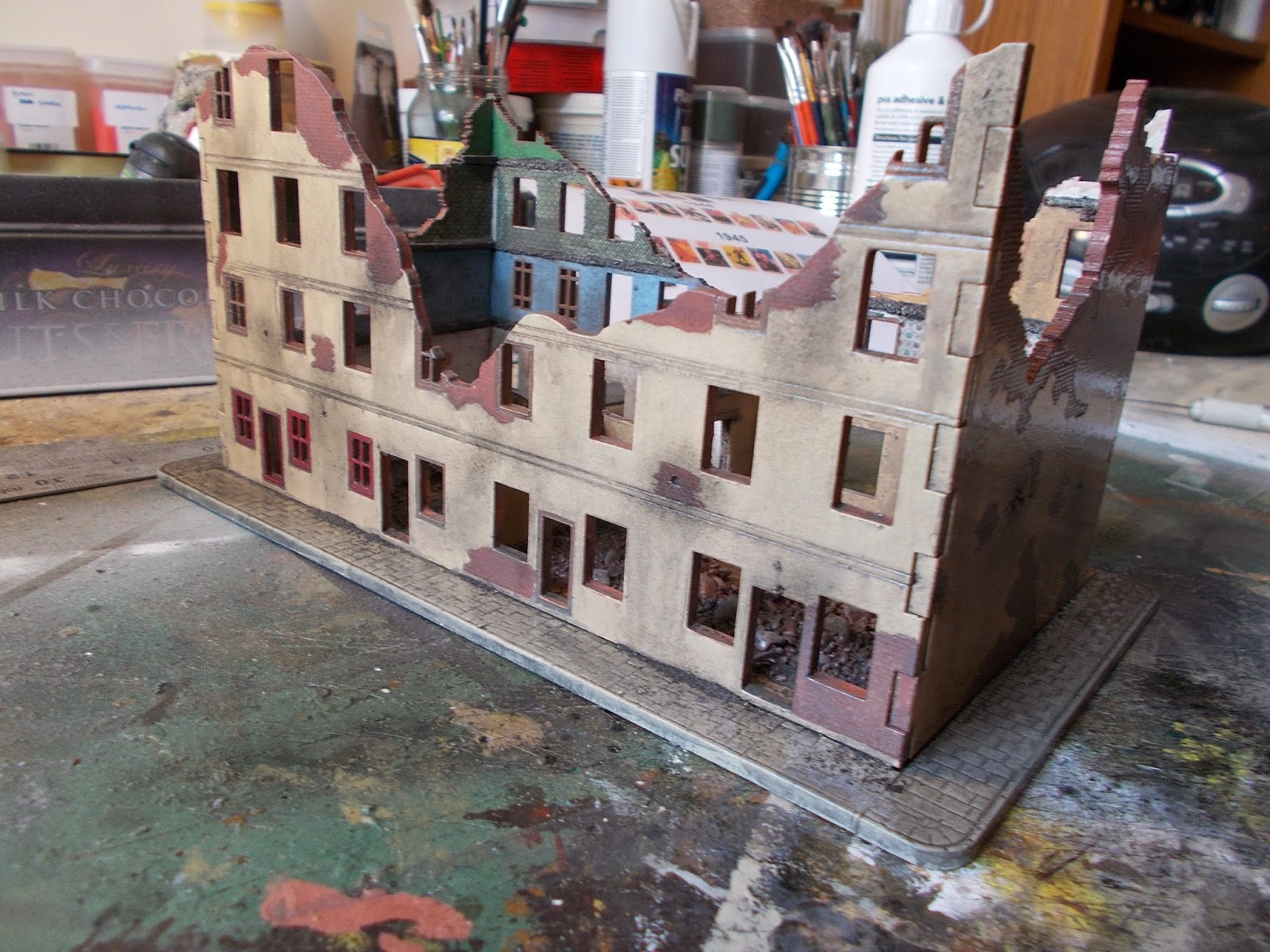 After the varnish had dried, I started on the final rubble additions. This started with making a mix of the grey rubble I had made earlier (detailed in PART THREE of this build), along with a red rubble made using the same process, but using Burnt Vermilion tempera paint instead of black. 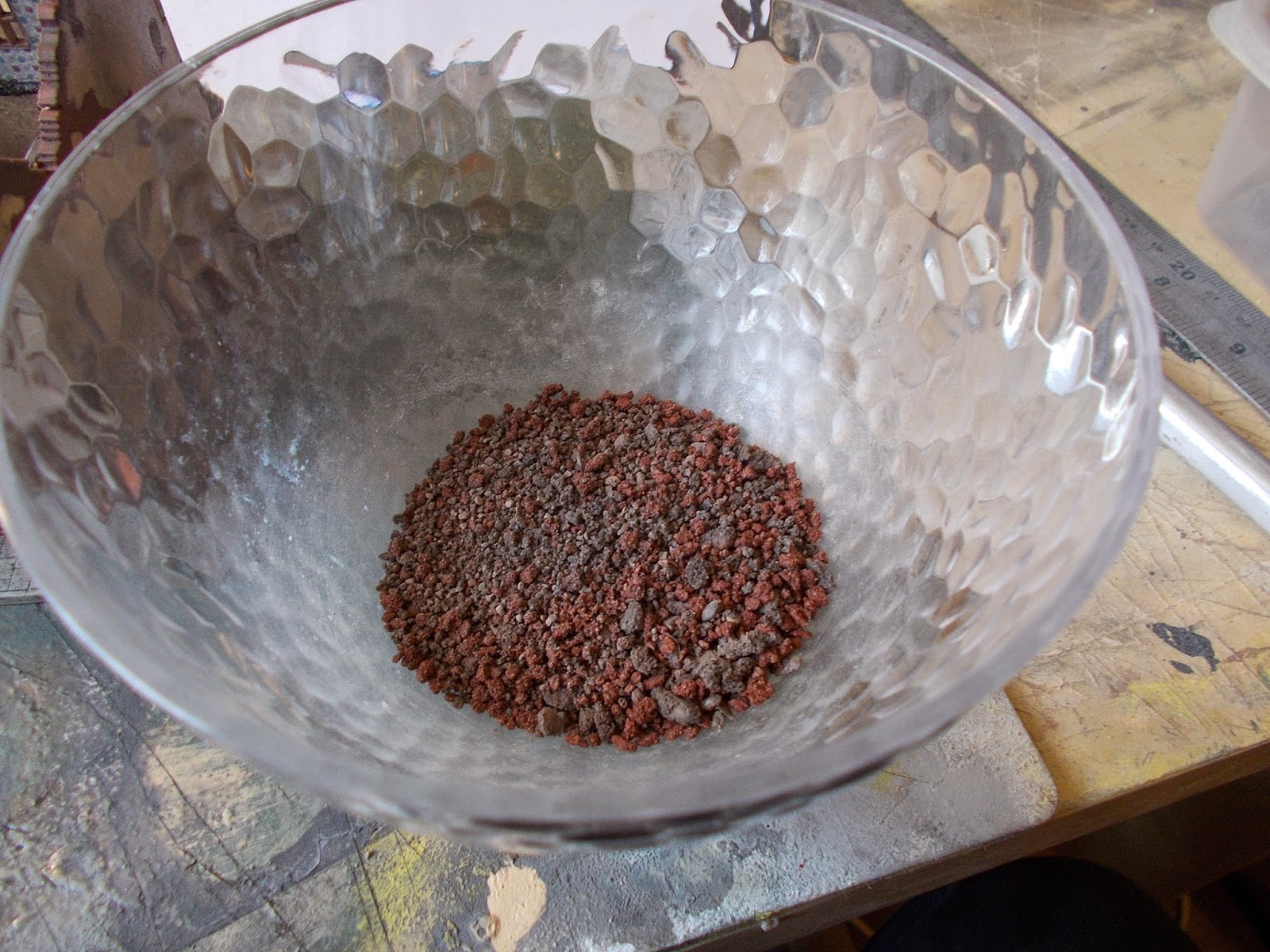 Using PVA glue painted into the corners of the interior and around the edge, the rubble mix sealed the gap between the building and the floor. Plus it gave an extra dimension to the rubble already in there. 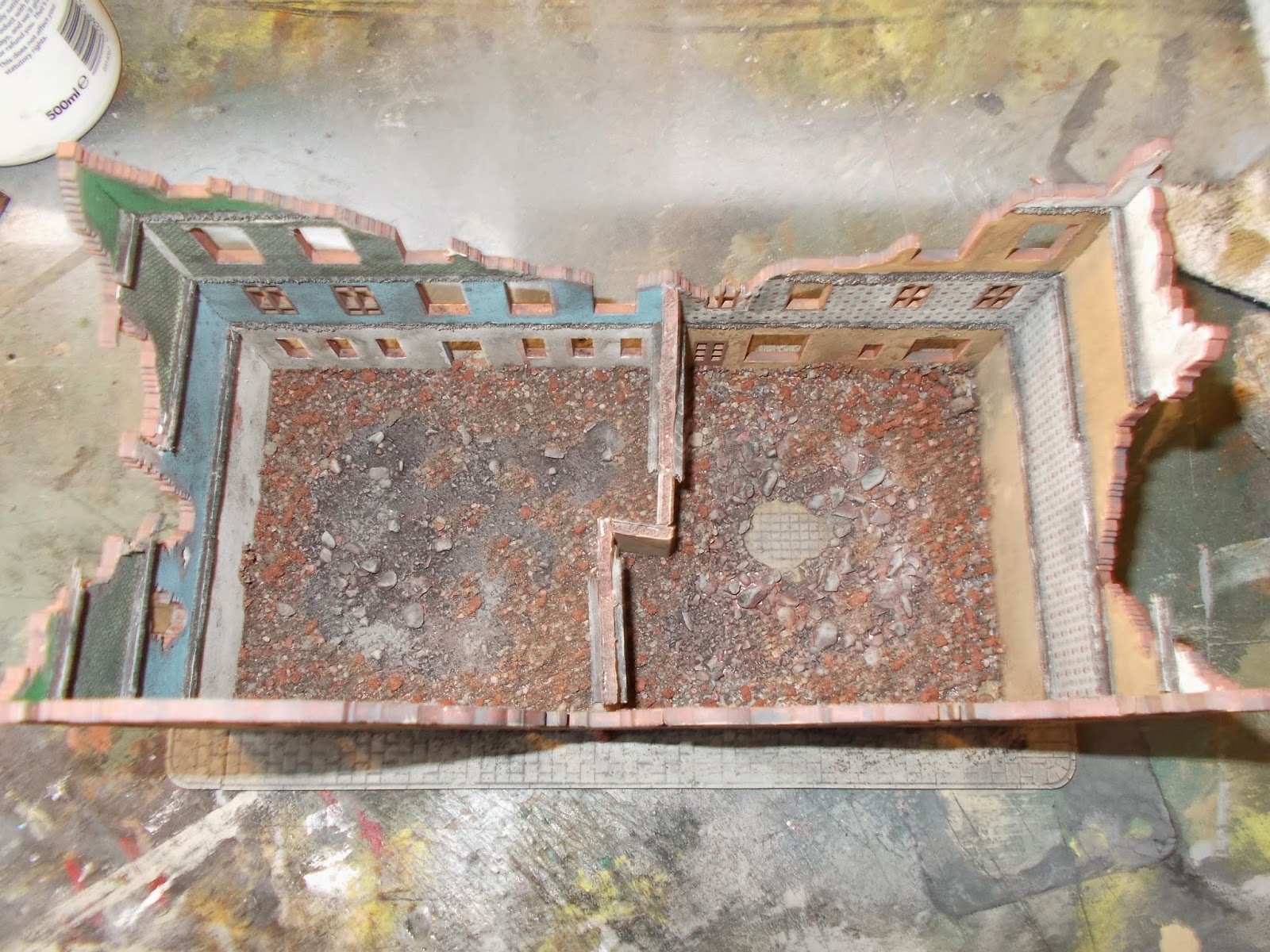 The same process was continued along the outer edge of the building, again, the rubble sealed the quite obvious gap around the bottom of the walls. As the PVA was still setting, I sprinkled the finer bits of rubble over the mounds to fill in any gaps left by the larger lumps: 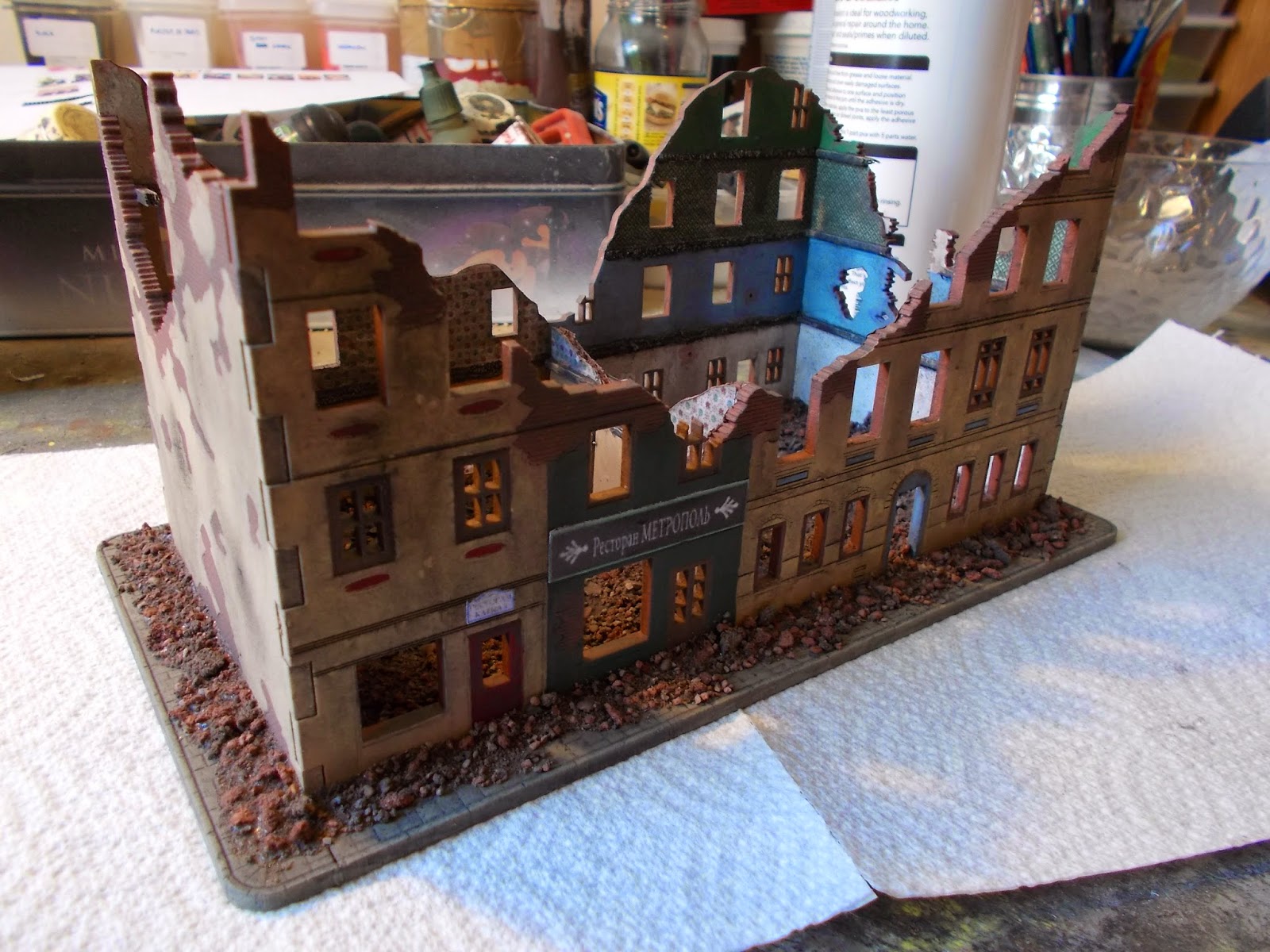 Nearly there now! Remember the broken floorboards I made all that time ago in PART ONE? Well, they finally got used! I glued them in to the bottom of the building. As this will be used for gaming with I laid them as flat as I could. I know it's not one hundred percent realistic, but it is more of an indication of rubble than anything else! 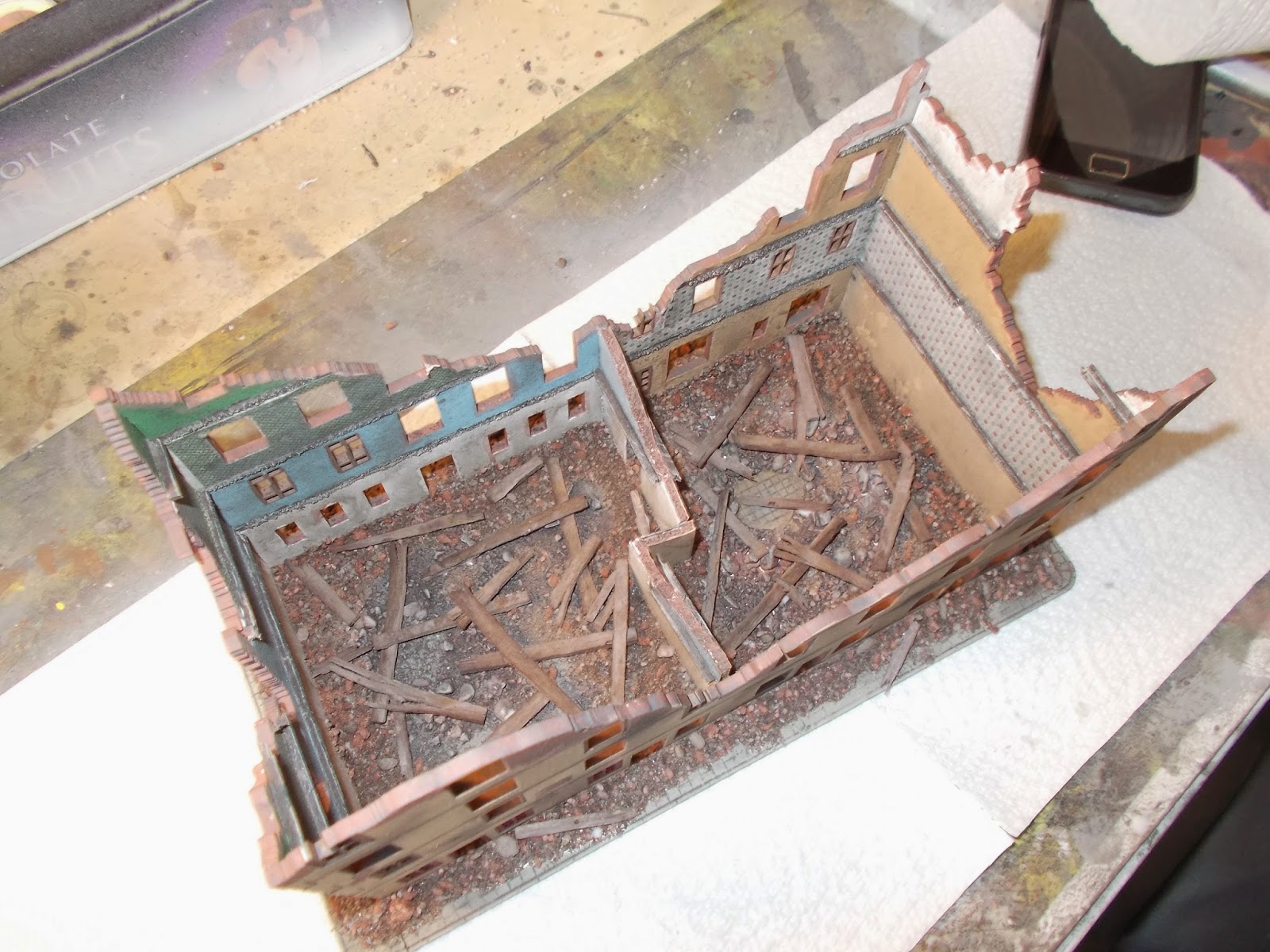 I then sprinkled some finer rubble mix over the top of the beams, to show further rubble collapse and it was finished! 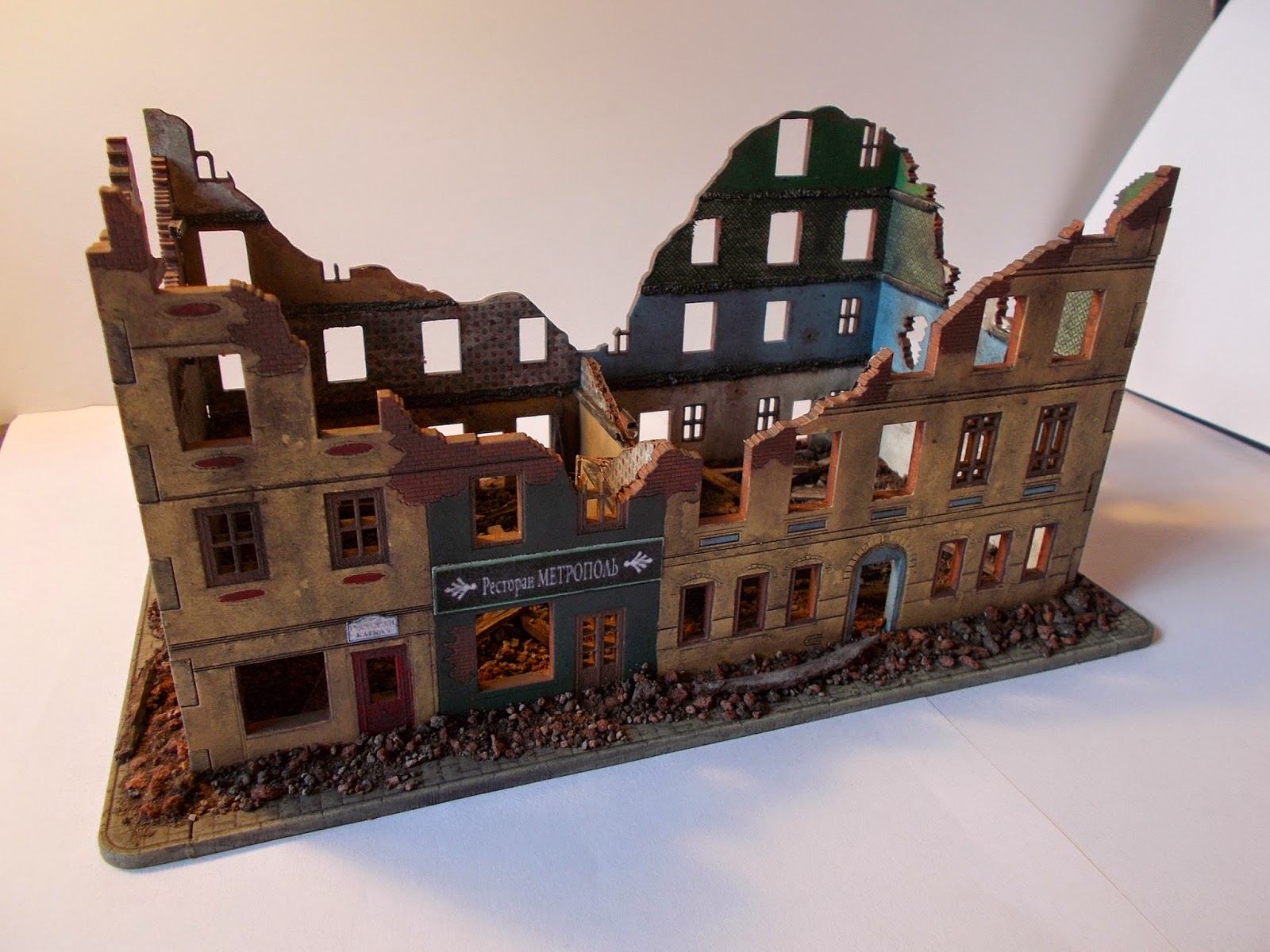 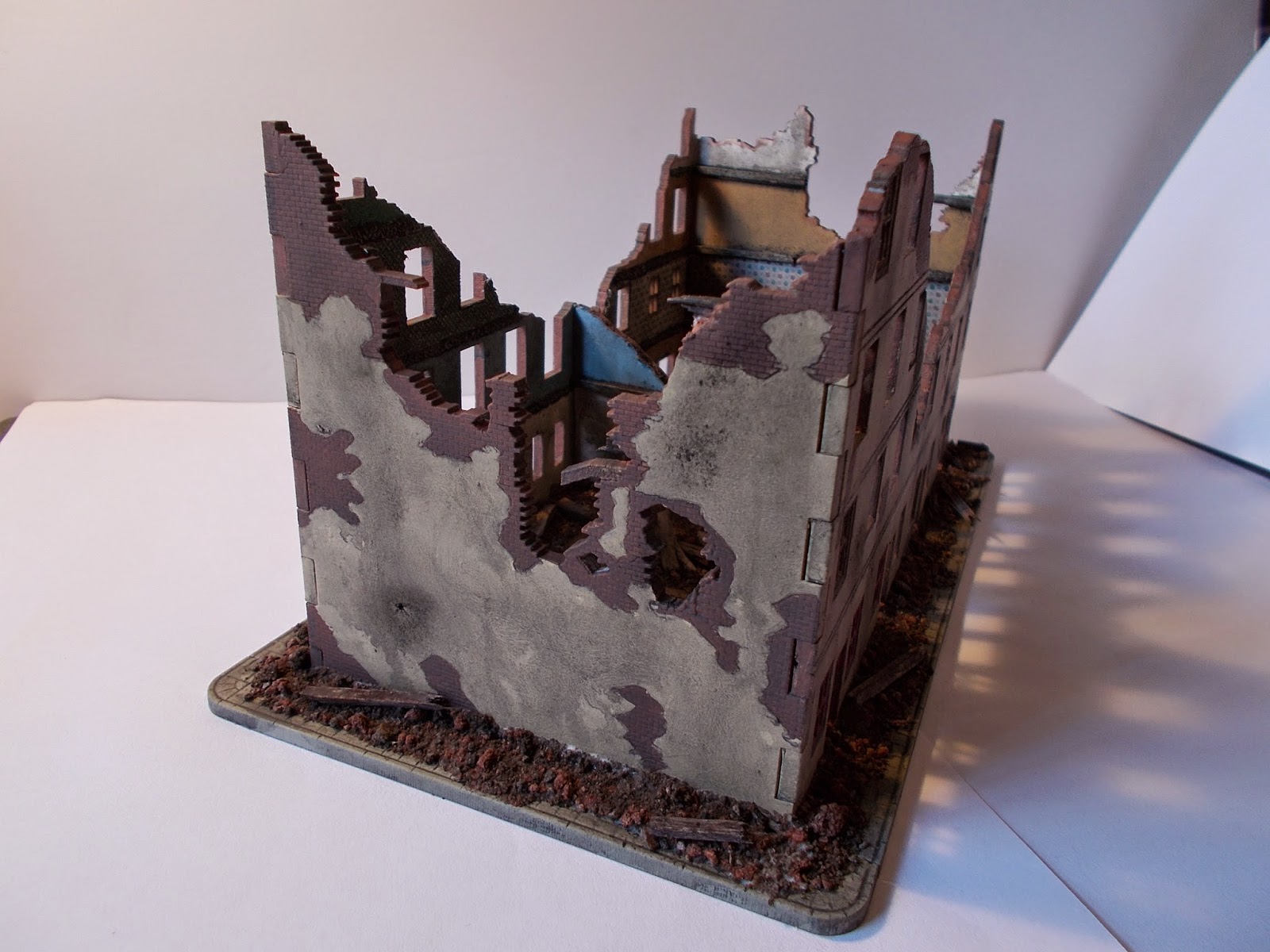 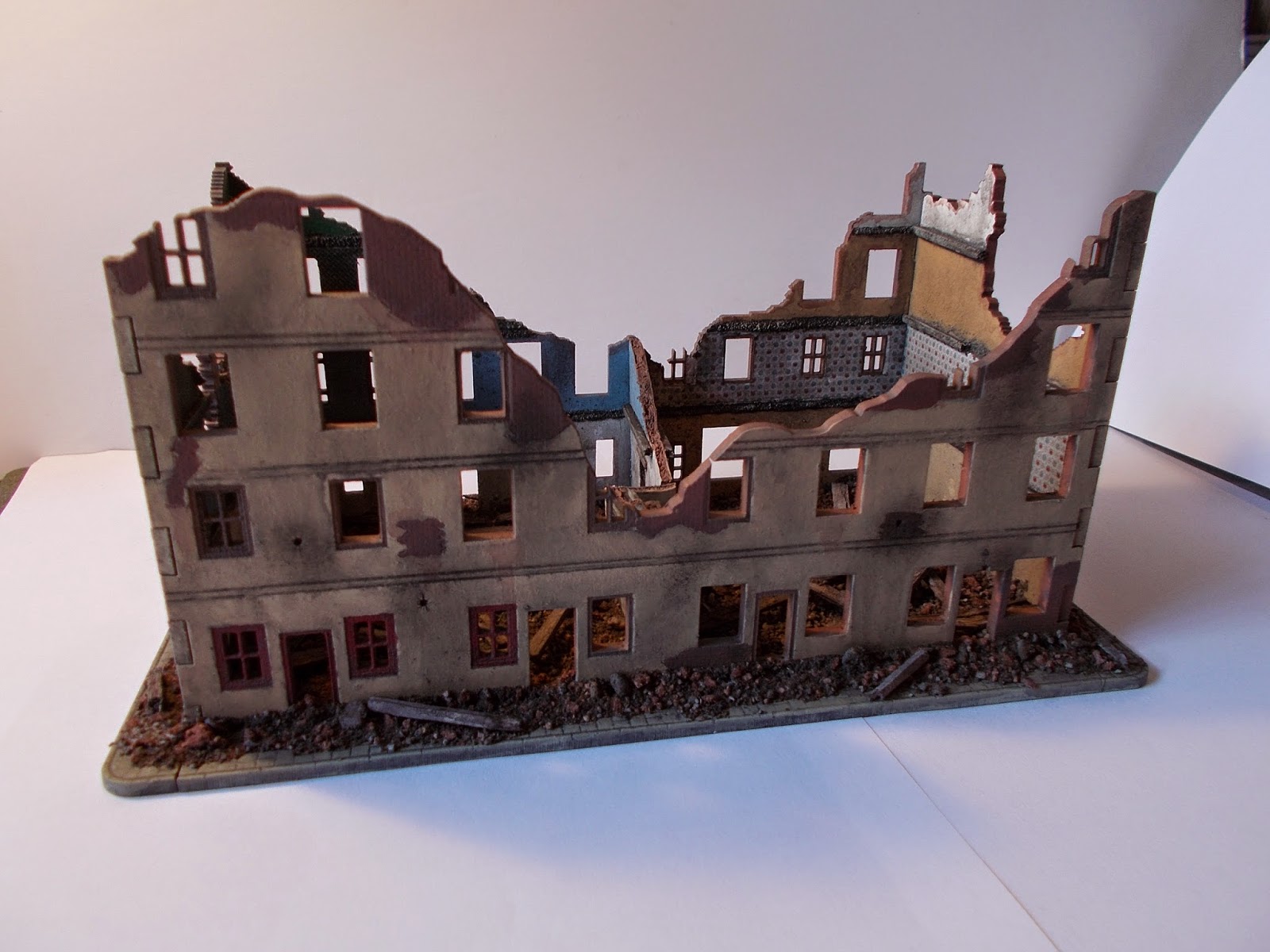 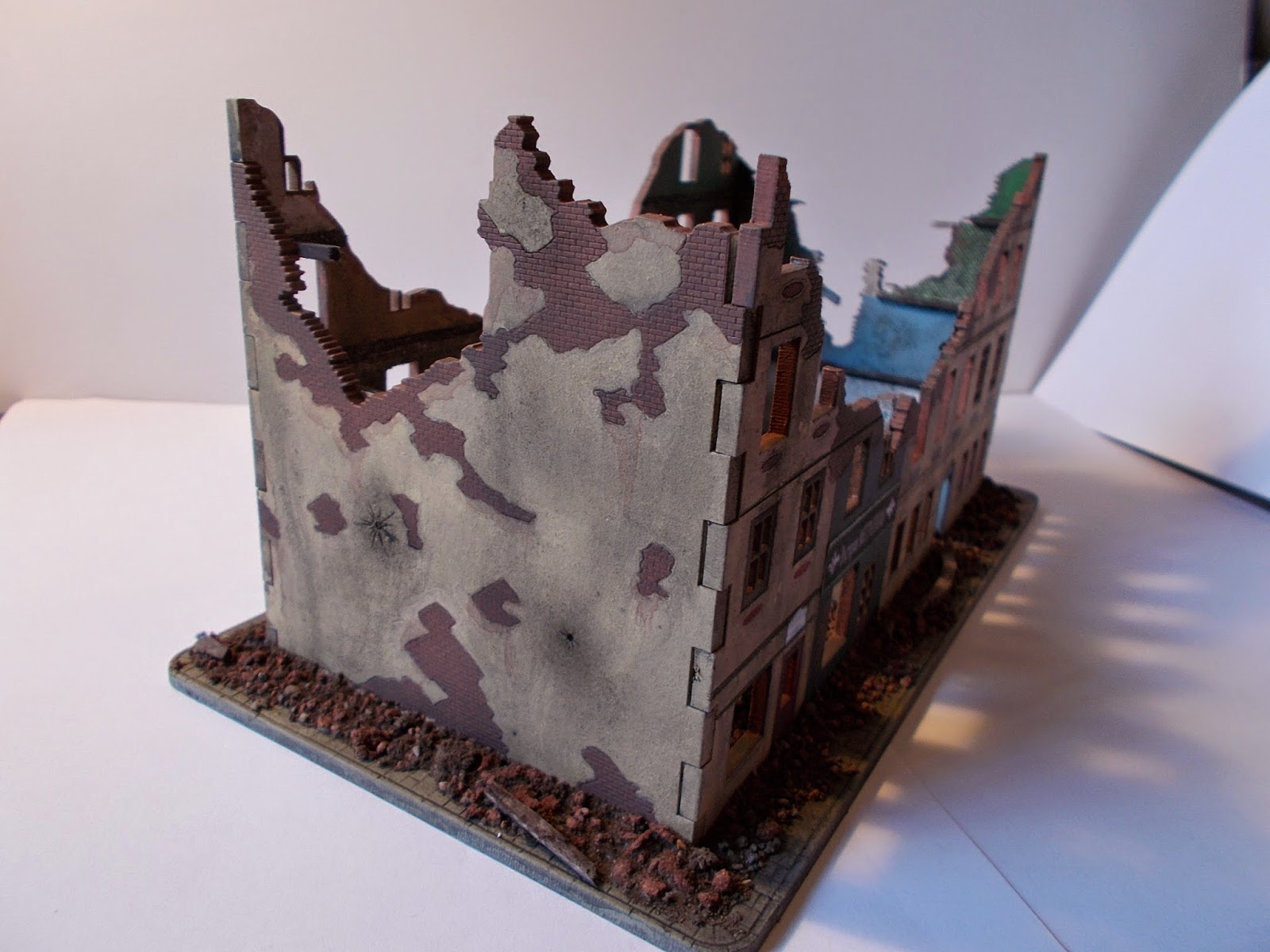 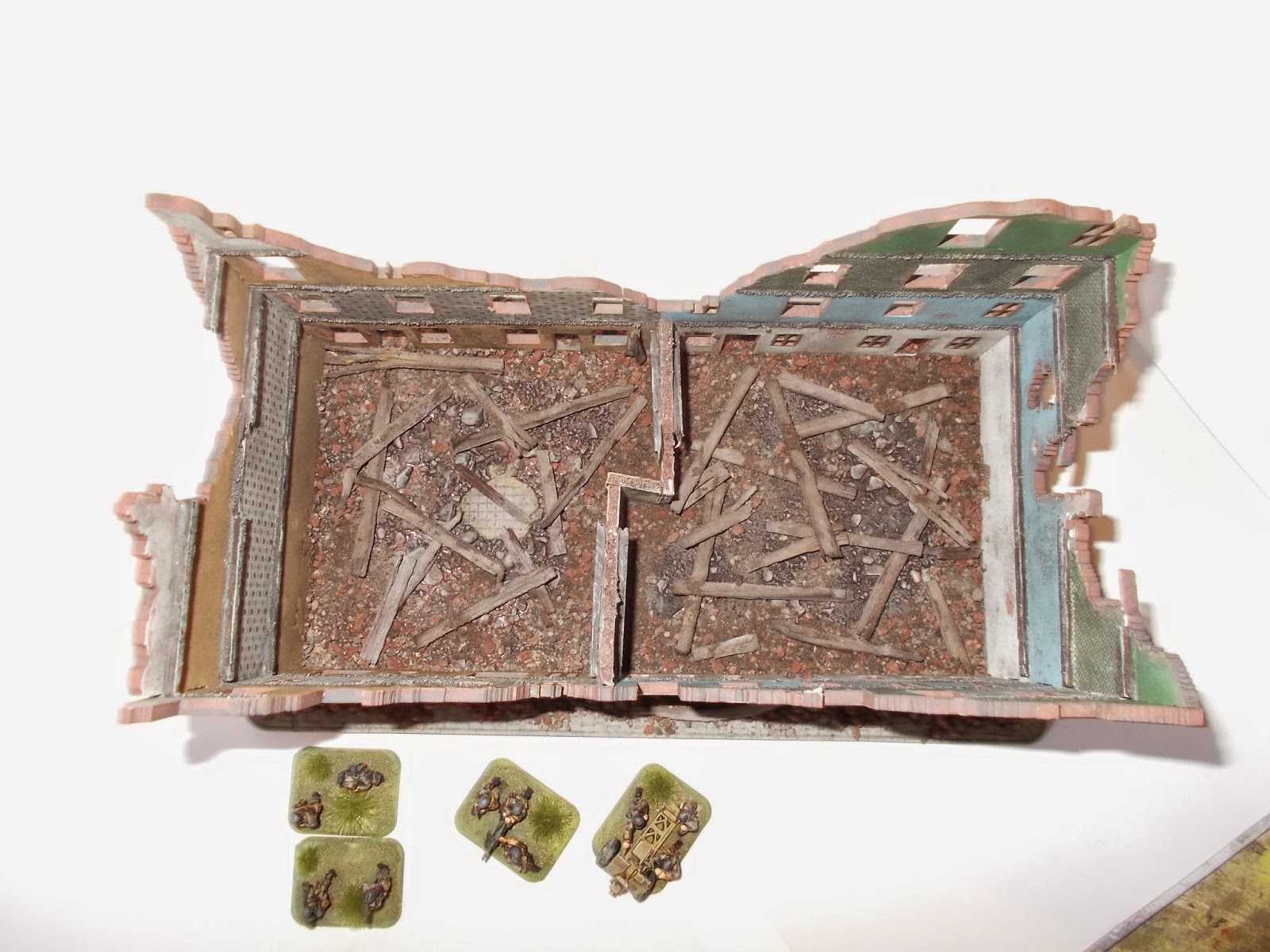 To give you an idea of scale, here are some 15mm Peter Pig Fallschirmjäger in front of it: 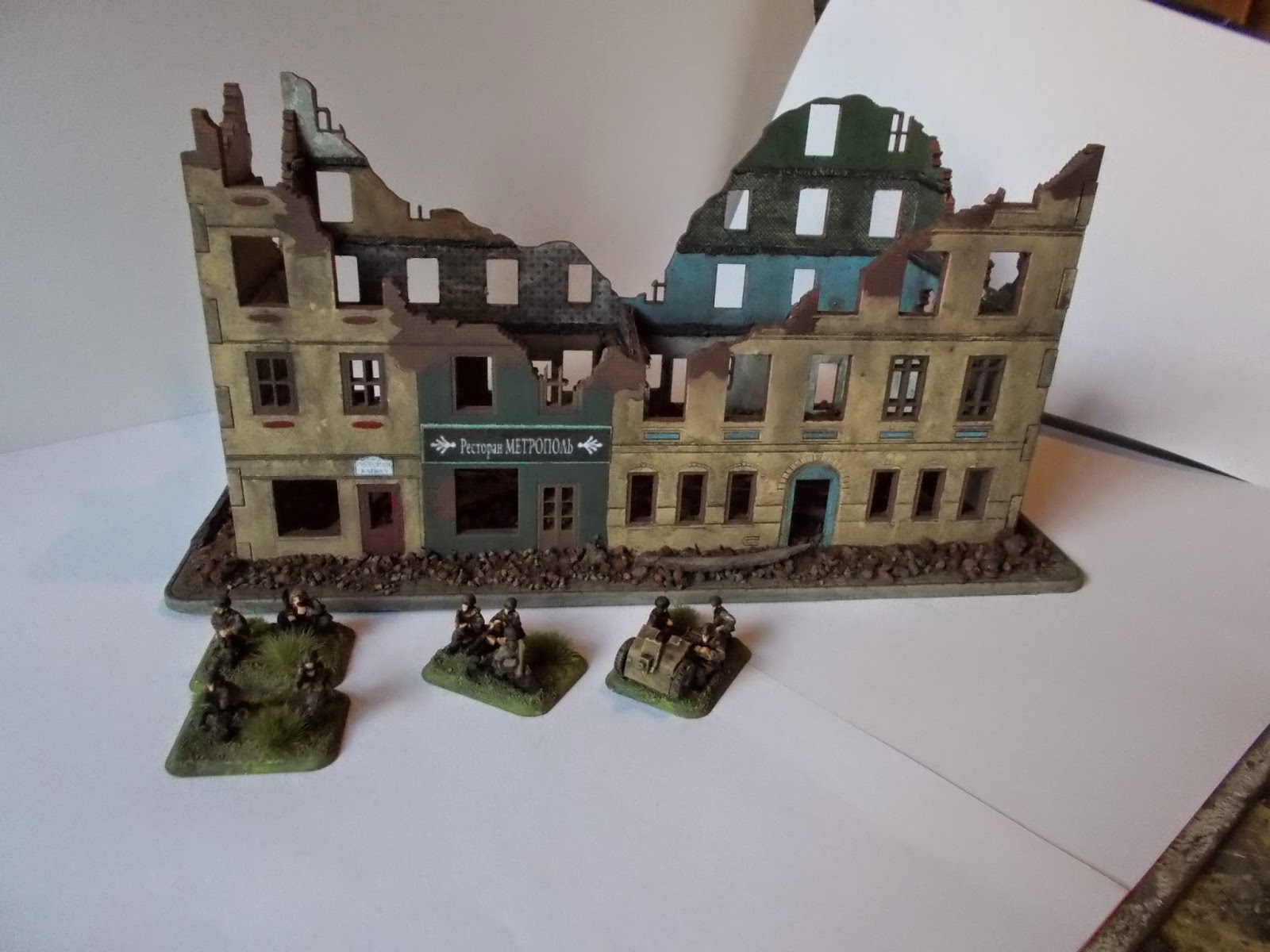 It took about three weeks in total to complete, but not all of that time was spent on working on the model. Overall, I am pleased with how it turned out, especially the rubble and weathering processes. However, one thing I should have done is glue the walls into place before starting, that way I could have worked on covering the corner joins properly. Plus I won't put untreated rubble in the base like I did with this one, as some of the undercoat could be seen through it. Now I have a couple of tubs of ready made rubble things should be a lot faster! have three more of these buildings to make, so that knowledge will definitely come in handy with those ones!

Today is also 100 years to the day that Lt Harvey -Kelly had the honour of being the first RFC pilot to land in France at Amiens. He beat his squadron commander (Major Burke) to the title by two minutes by flying across country rather than navigating by the rivers. 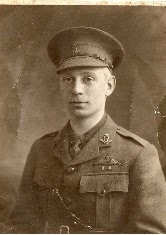 His was the first of about 60 aircraft that were attached to the BEF to fight Imperial Germany.
Labels: 15mm Painting Product review scenery scratch-building Terrain Tutorial Work in Progress WW2