One big thing missing from by gaming board is hedges and with this tutorial I wish to redress that imbalance. I have been puzzling how to make hedges for a while until I bought some compressed horsehair from Treemendous at Vapnartak, so this post will also be a product review of that.
But you get two for one in this post as I still needed something to mount the hedges of though, so I bought a set of thirty six 2mm MDF bases from Warbases, these were very cheap and came pre-cut to a length of 100mm by a width of 25mm. That would give me about three and a half metres of hedgerow and you, dear reader, two product reviews in one! 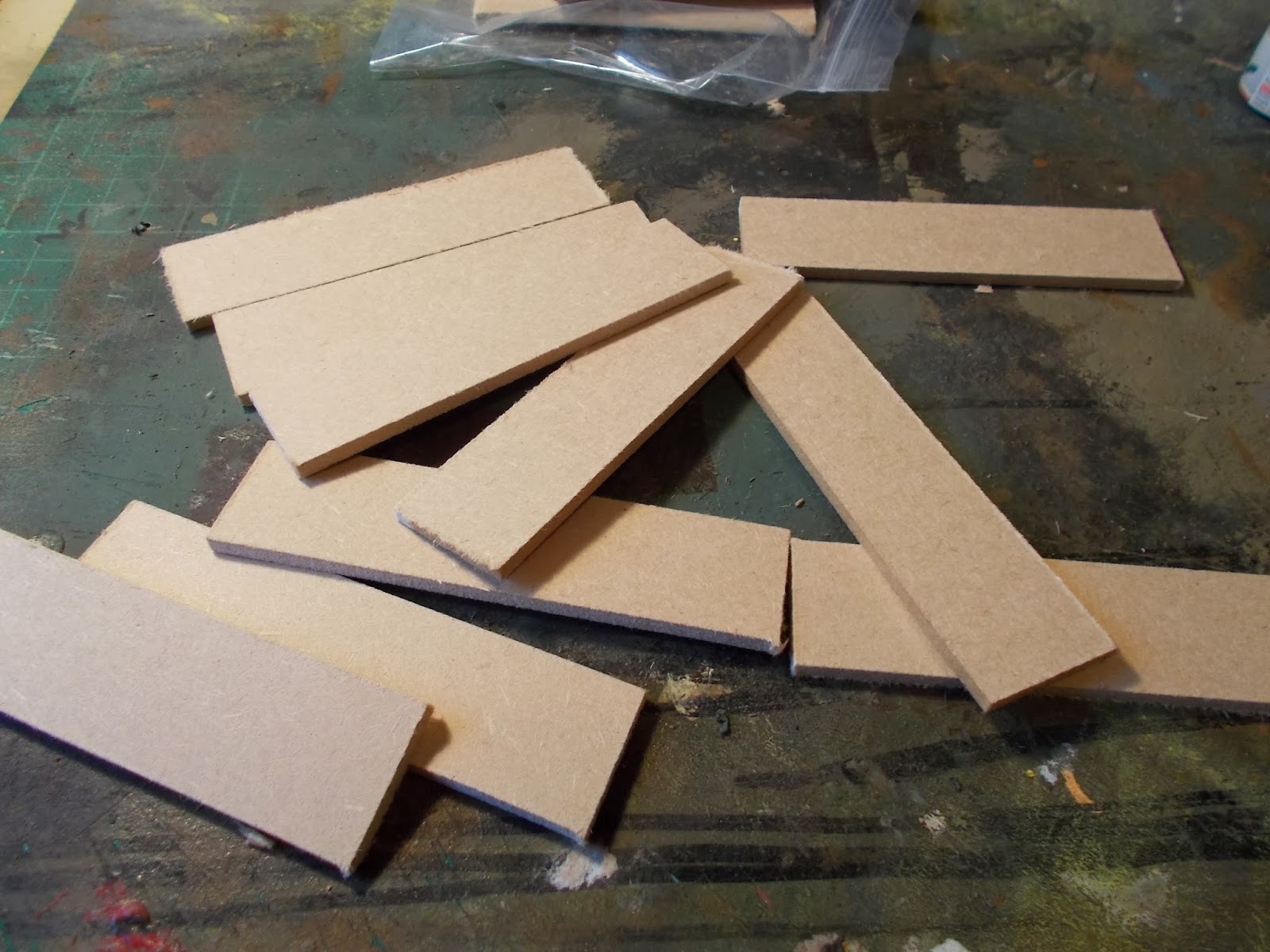 As you can see, the bases are cut square when they arrived and the edges were too sharp and vertical for my needs. Using a craft knife (watch those fingers!), I carved the edges away so they would taper towards the upper side of the base. It doesn't have to be neat as they are supposed to represent a natural bank of earth at the base of the hedge anyway. 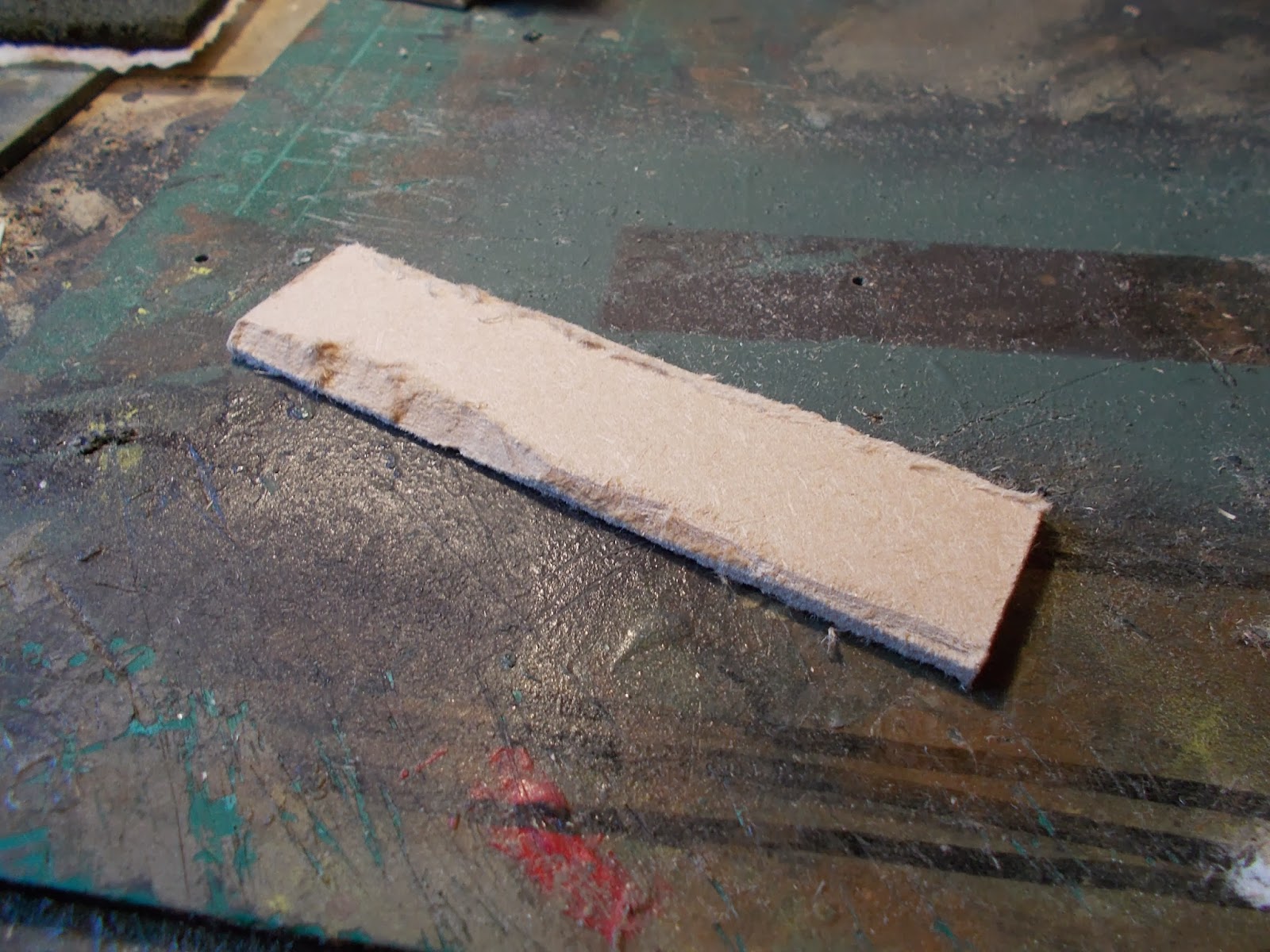 But they do need a bit of cleaning up and as MDF works well with sandpaper, the edges were soon looking a lot better! This stage took less than an hour for twelve bases. 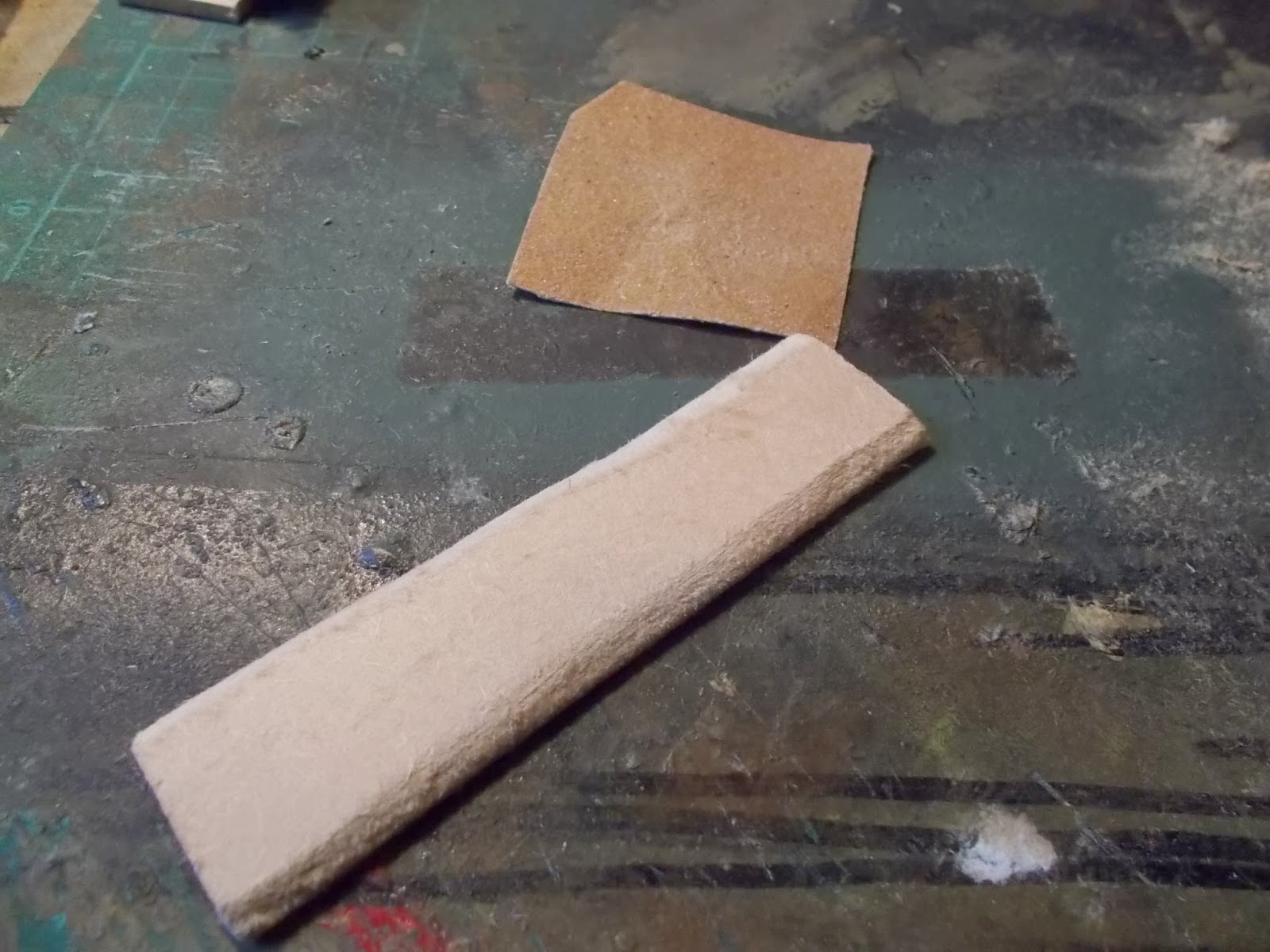 The next stage was applying sand, I did this by brushing thinned down PVA glue over each base then dipping it in the sand. I laid them out to dry and they reminded me of Captain Birdseye's Fish Fingers... 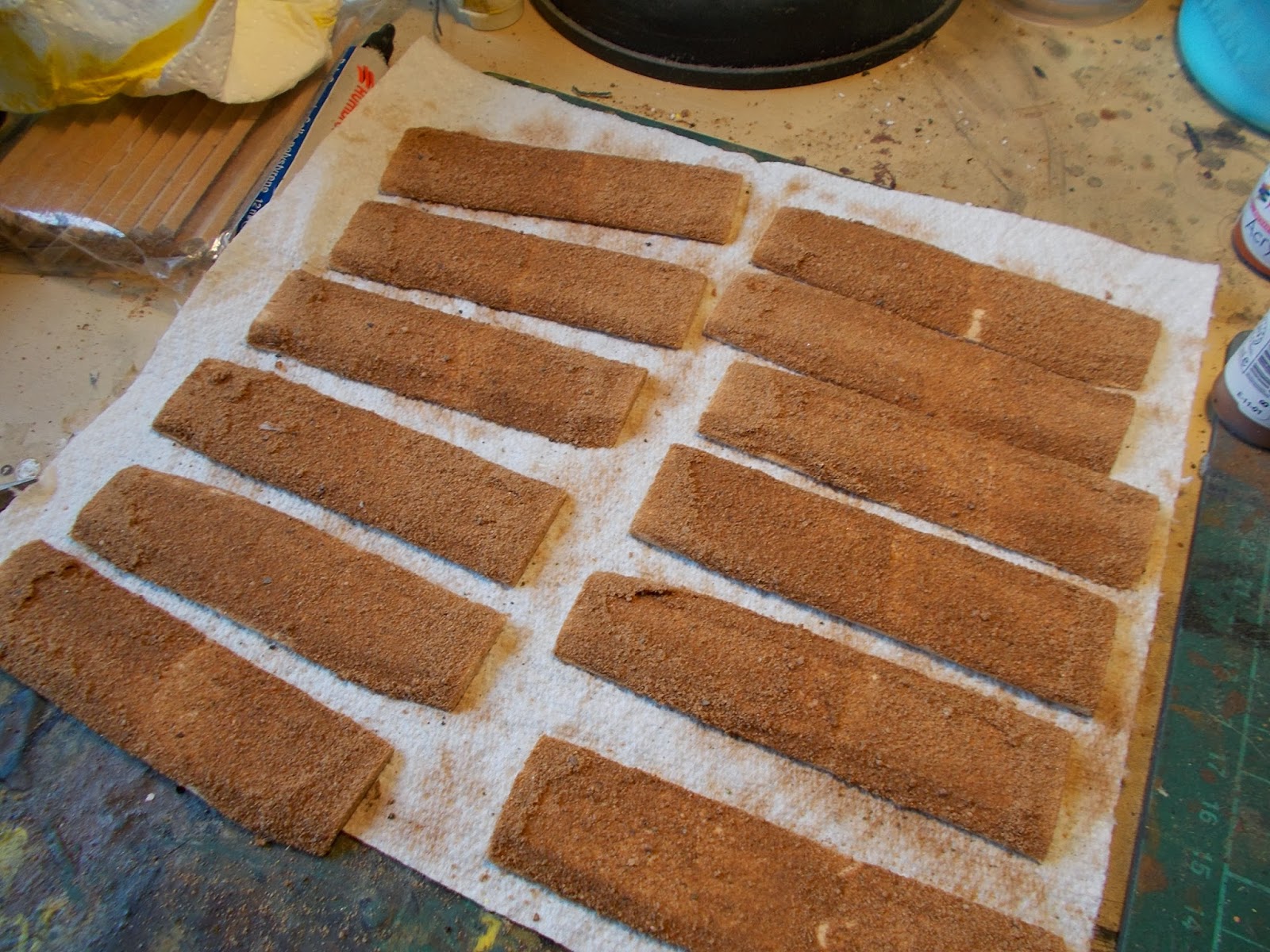 When the sand was dry it was simply a case of painting the base. I sprayed them all in Humbrol Dark Green, inkwashed with Vallejo Flat Earth and a final drybrush of Yellow. They were then varnished and left to dry again. 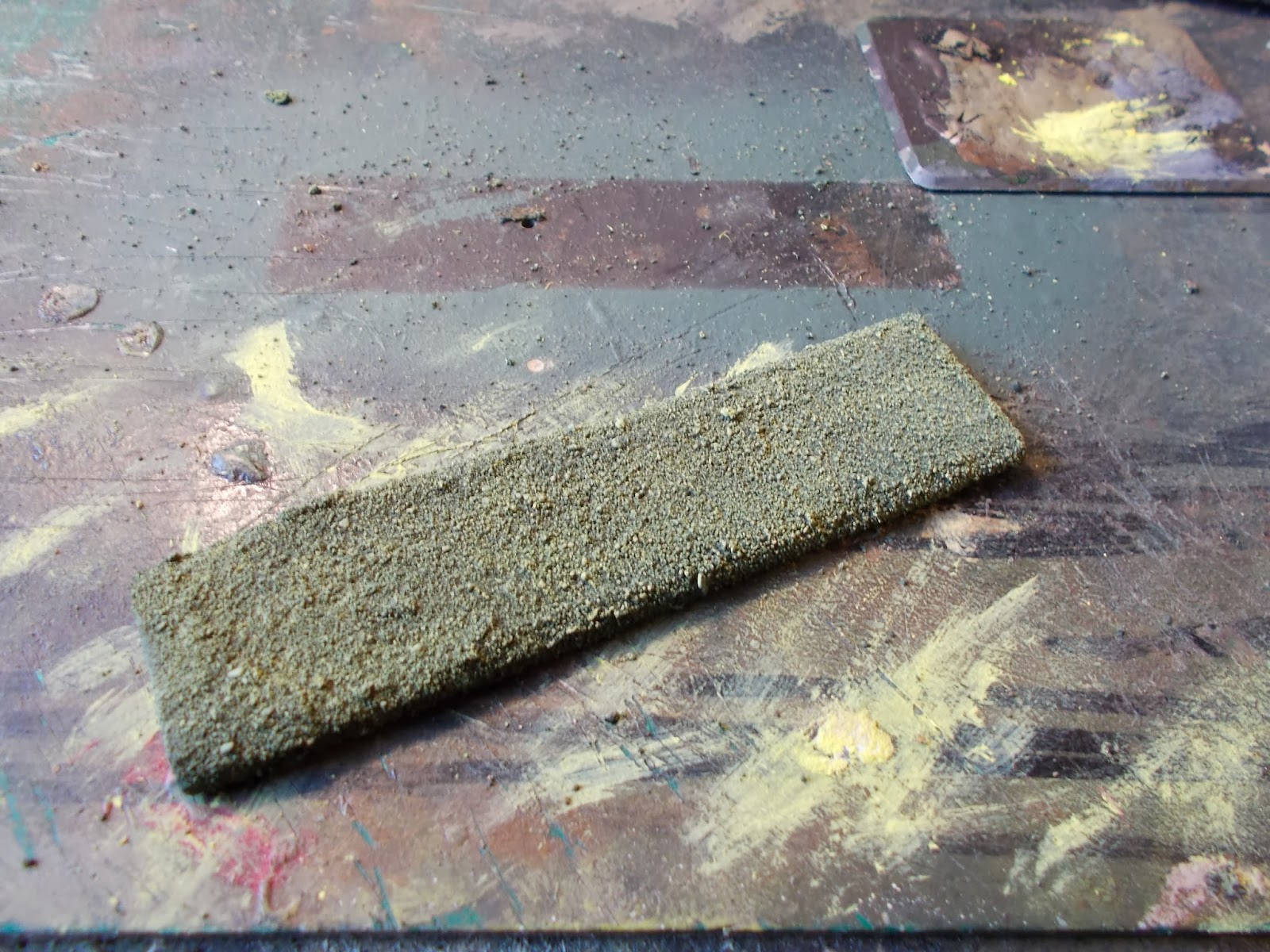 This is the slab of horsehair which I bought from Treemendous and it's easily cut into strips with a pair of scissors. I found that one strip (about 1cm wide) did enough for four bases, with a little left over, which I will probably put to another use at some point. 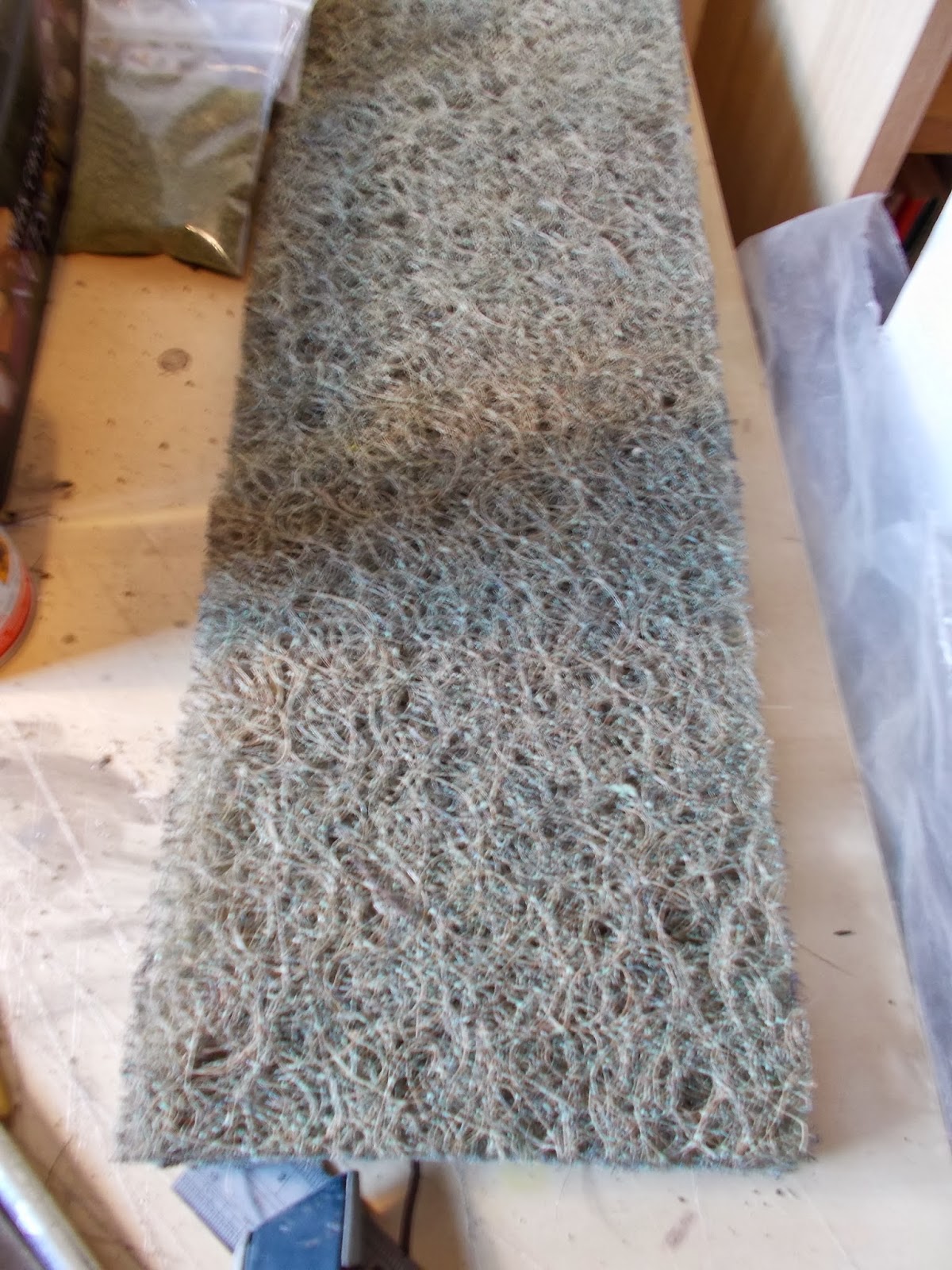 The next step was to simply cut the strip into smaller lengths and PVA glue them onto the bases. The glue will dry clear, so don't worry about that big blob of white! 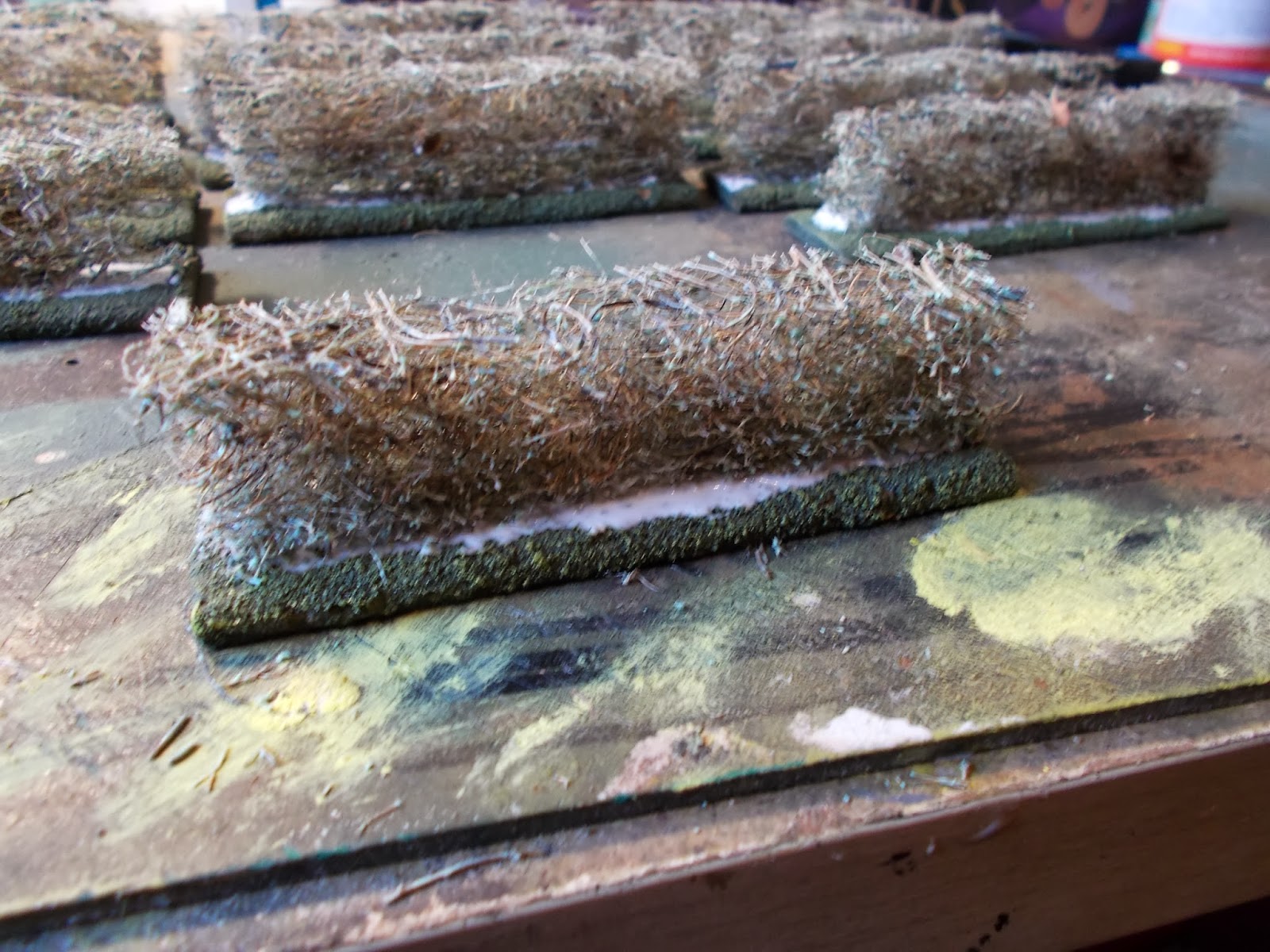 The foliage still looked a little too uniform, so I gently teased the horsehair apart to give a more rustic look: 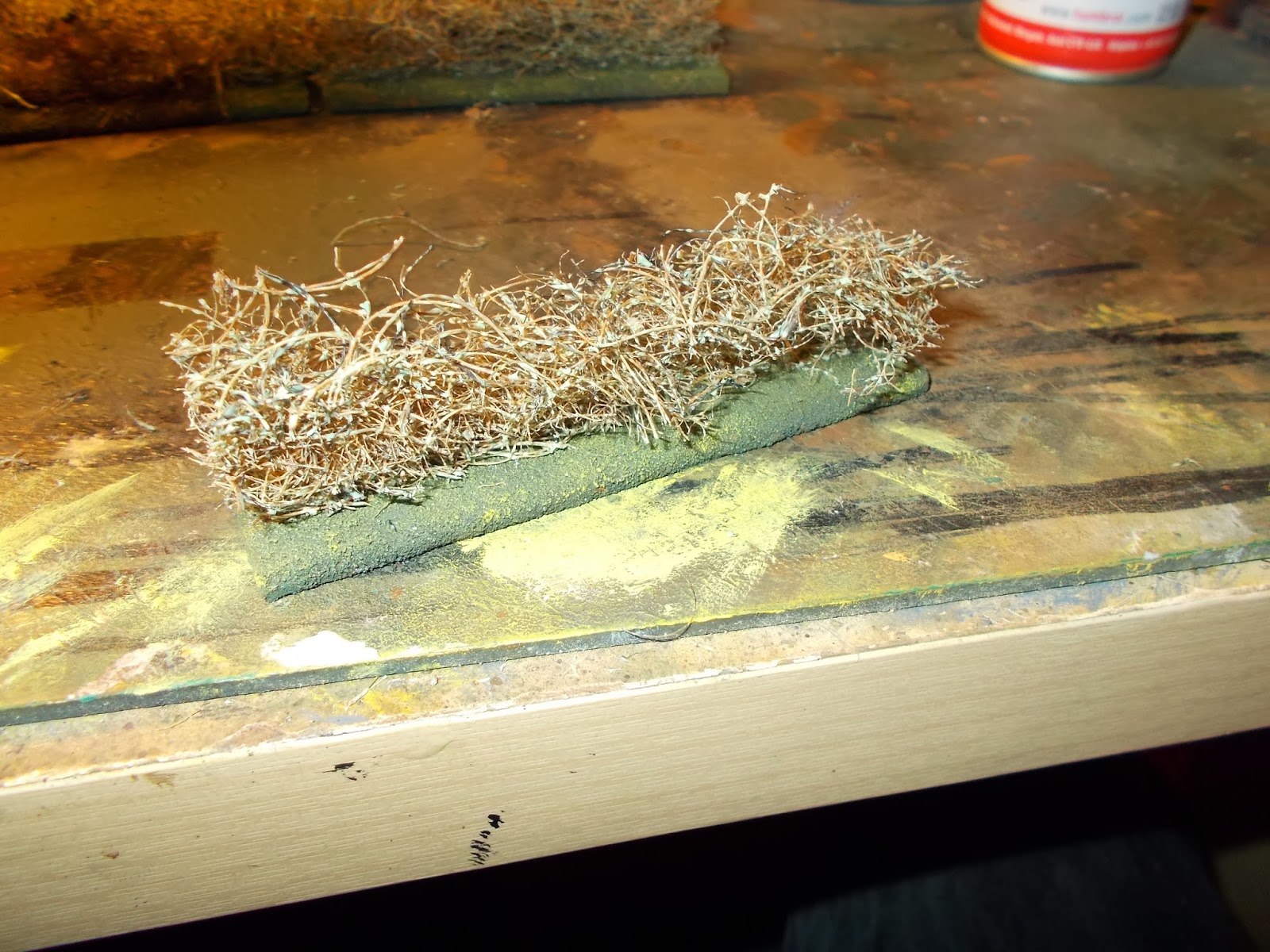 They still looked a little bare, like a Winter hedge and I wanted Summer hedges, so the next step is to add some more foliage. This also came from Treemendous in the form of pre-coloured ground-down cork scatter and is sold in clip bags. I splattered some thinned down PVA glue with an old brush randomly along the length of the hedge then dipped it in the scatter. The result was excellent. It looks like a natural countryside hedgerow rather than a tidy privet hedge which a lot of commercially made hedges can sometimes look like. 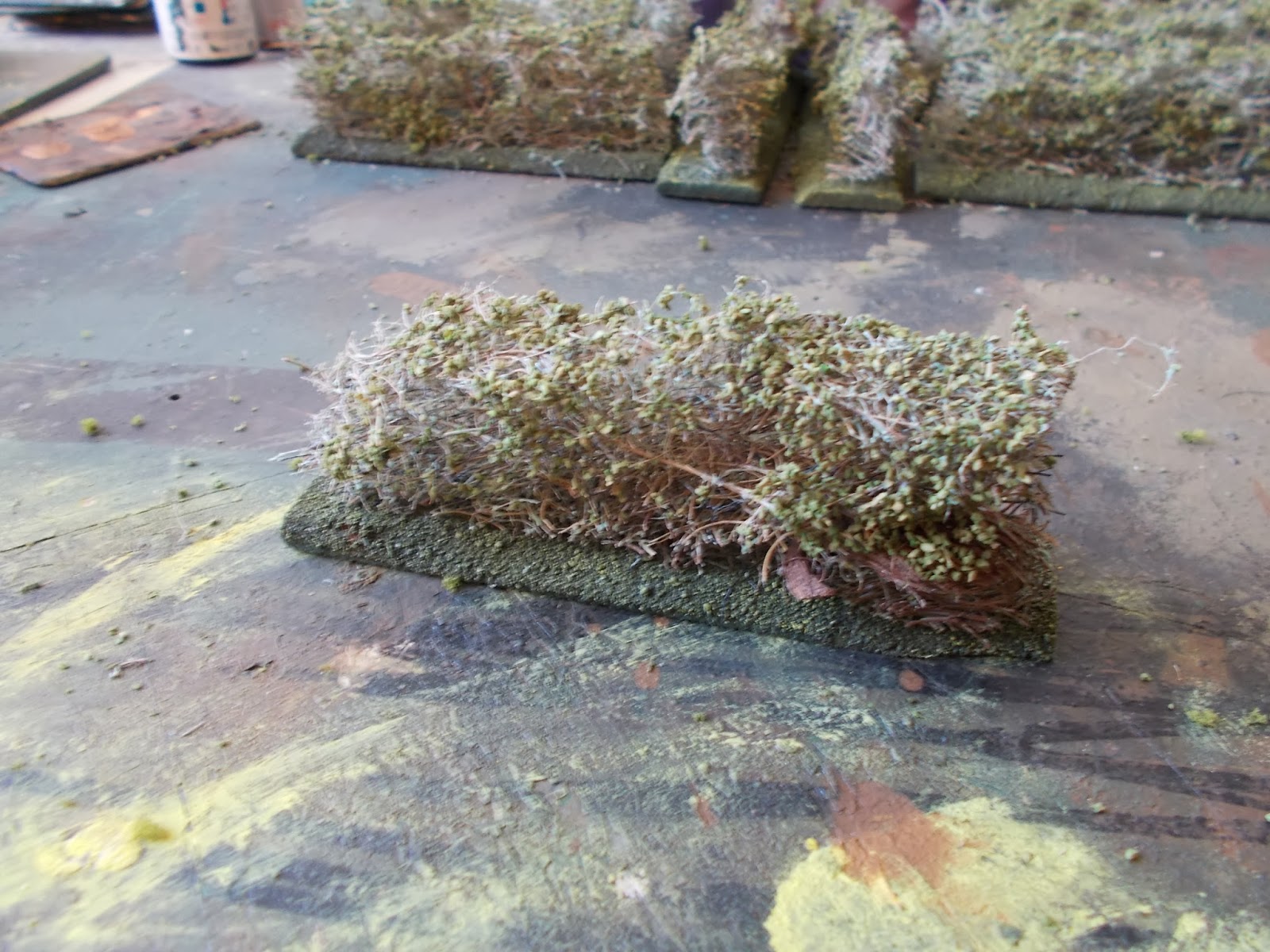 The final step was adding some clump foliage to the base along with some grass tufts to the bases to break them up and represent the other flora that one finds at the bottom of hedgerows. 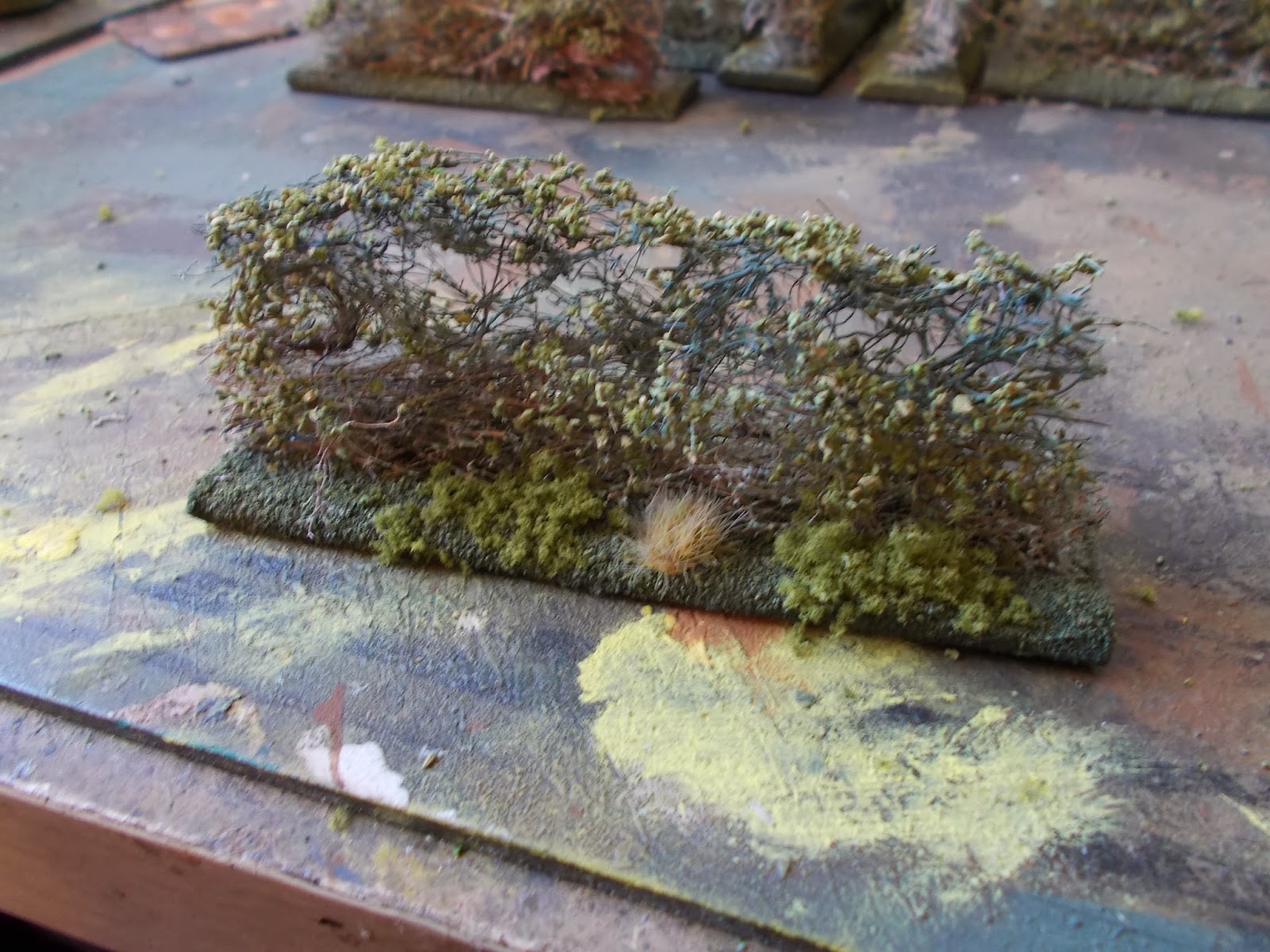 And here they are, with some Panzer IVs and Trucks to give a sense of scale. 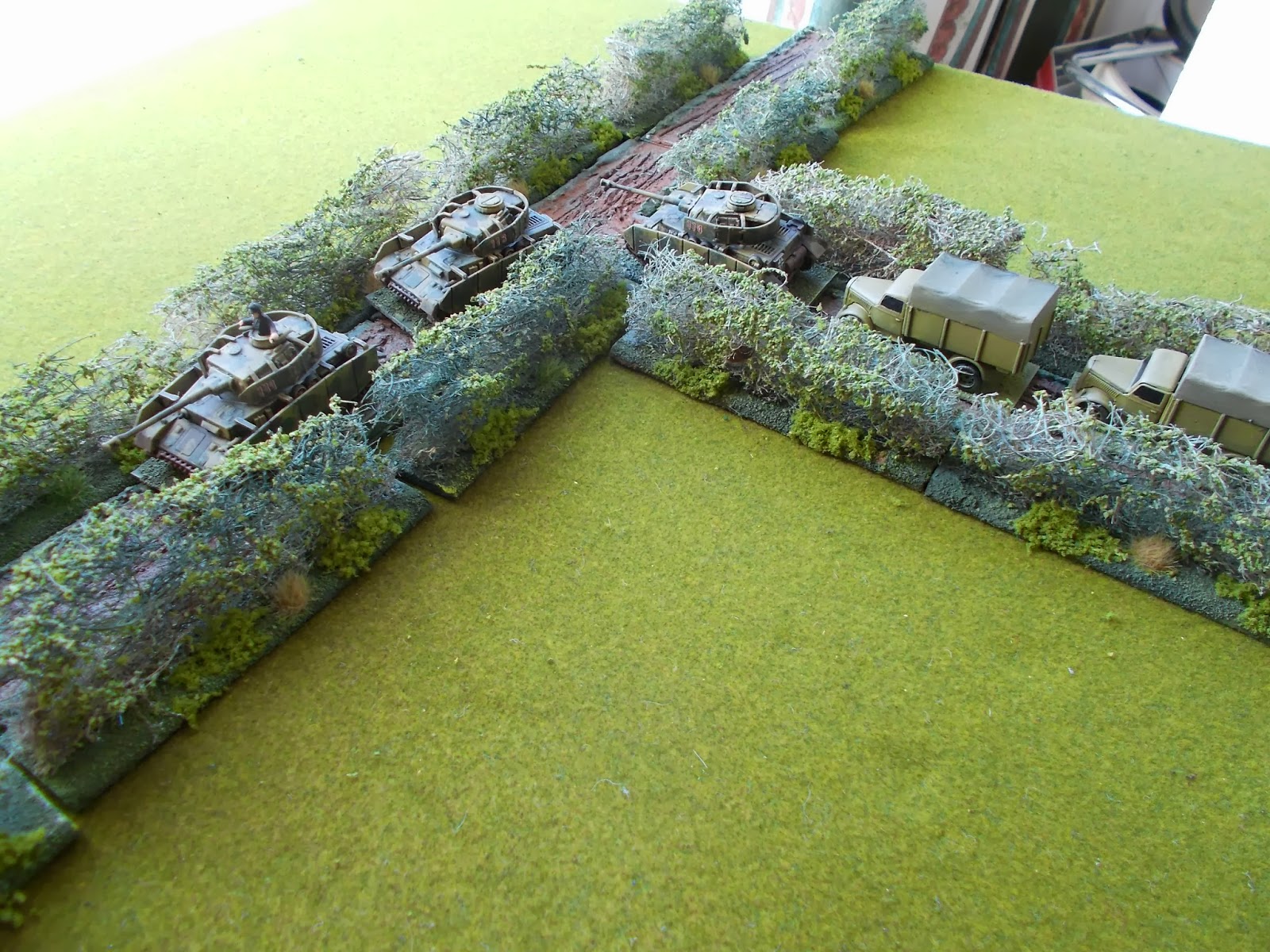 They provide a block for line of sight and an extra dimension that my board was missing. 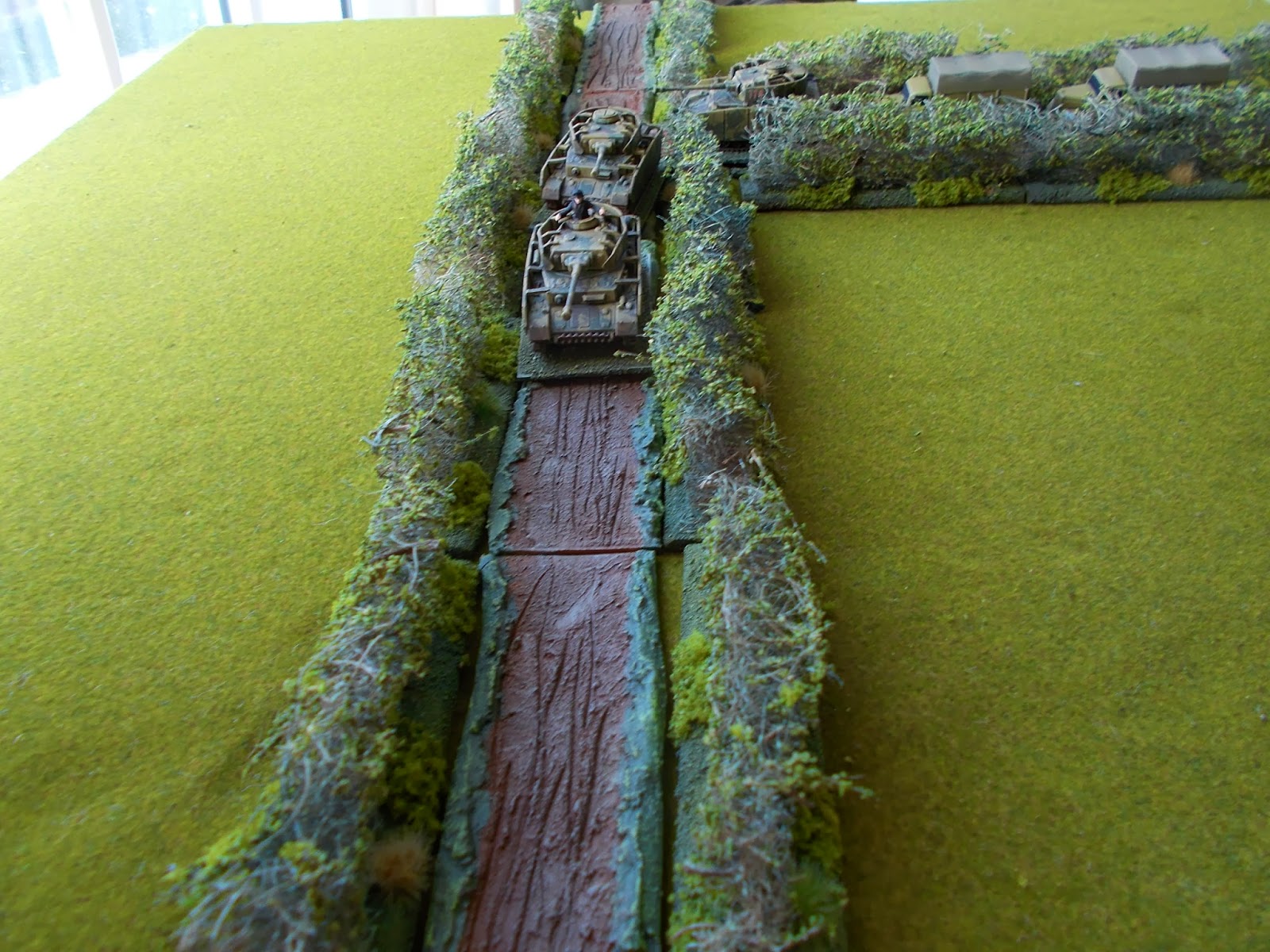 I am very happy with how they turned out and the Treemendous horsehair is perfect for the job. The slab I bought cost only a few pounds and has turned out loads of hedgerow, so all in all a great deal! It could be said that these hedges are pretty high, but it not only the Bocage of northern France that has high hedgerows, as this photo of a UK hedgerow shows: 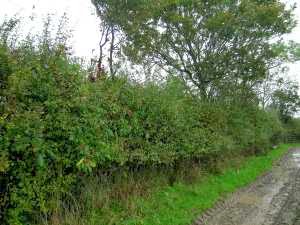 I am off to France for a couple of weeks on Monday, firstly taking some students on a battlefield tour then for some excavation work at Thiepval Woods for a week, so this blog will be a little quiet until I return!
Labels: Product review scenery scratch-building Terrain Tutorial