I've Got a Lovely Bunch of Coconuts

As part of my ongoing Singapore/Malaya campaign build I realised I needed some appropriate scenery. I have lots of trees for the European theatres, but wanted something a bit more typical of South East Asia.
When I worked in Singapore I noticed that the flora is quite mixed, so I am going to use my existing trees but I want to mix them up with some palm trees to add a bit of flavour, like this Singaporean forest:

I bought twenty palm trees from an EBay vendor, based in Hong Kong, I think. They were dead cheap, about £7 for twenty, but when they arrived I saw why they were so cheap: 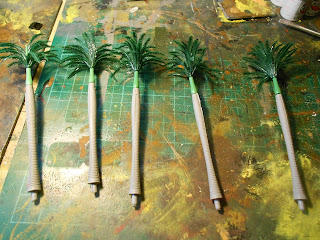 They are pretty rough and basic as sold, but a bit of work will make them usable. I took five of them to work on first as a test and the first thing to do was cut that lump off the bottom and then cut them into different lengths. Trees are not all the exact same height...I also had to clean up the flash and mould lines the best I could: 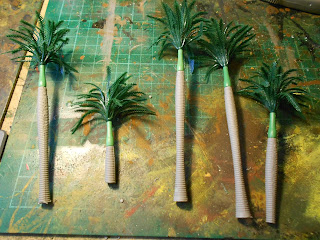 Next stage was to the glue the green top part to the trunk to secure them for games and glue the entire tree onto an individual base. I used small Flames of War bases, as I have loads kicking about and they don't make such a big footprint on the table: 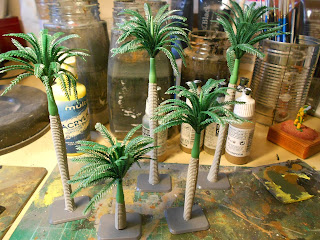 Once the glue had dried, I built up the base with polyfiller, this way it disguises the flat base and also gives a bit of weight to the bottom of the tree so it won't fall over so readily on the table: 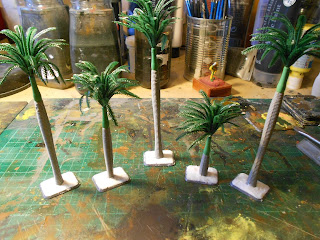 Leaving the pollyfilla to dry over night, I then added the usual sand to the bases to add texture. This is just done by applying PVA glue to the base and then dipping the base in some sand: 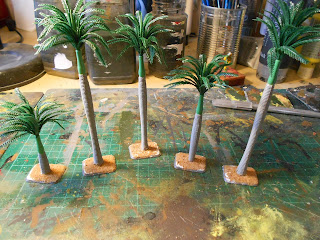 There's no need to be too neat here, as it adds to the natural feel of the texture anyway: 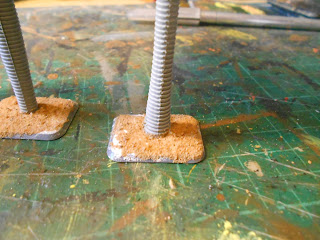 After the PVA had dried I sprayed each entire tree with Humbrol Matt 30 Dark Green. This is a good base coat for all the aspects of the trees. 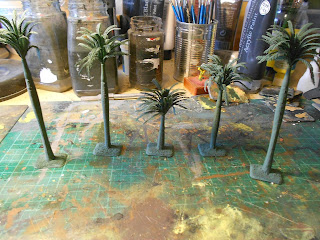 The next thing to do is paint the bases, this is an inkwash of Flat Earth by Vallejo over the green and then drybrushed with yellow.  I also drybrushed the fronds with the yellow at the same time: 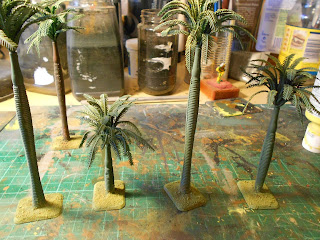 The next stage was a heavy drybrush of Vallejo Flat Brown over the trunks: 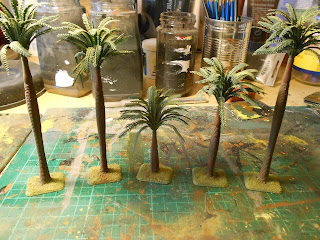 Followed by another drybrush of Khaki and then finally Neutral Grey, both by Vallejo. The grey is because the pictures of palm trees I have seen look like they have a greyish colouring over the trunks. 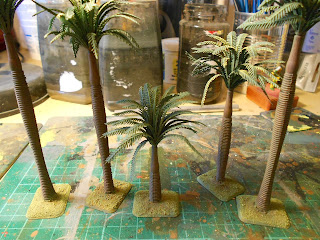 Final stage is to add a little bit of foliage on the base to break up the shape of the rectangles and just give the trees a bit more of a 'jungle' feel. 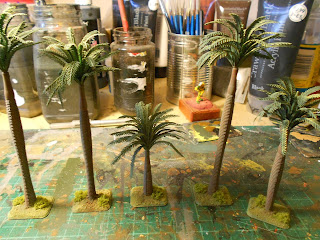 And here they are mixed in with some of my other trees and a couple of Japanese Type 97 tanks for scale. 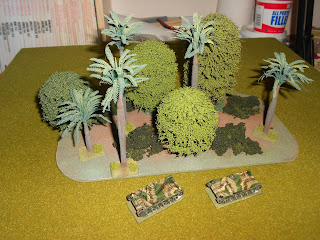 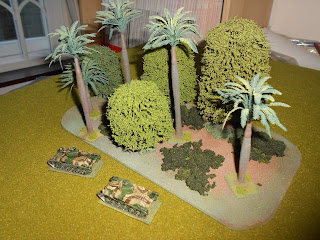 So that's it, these were pretty simple to get the original tree to a usable state, they took maybe two hours in total and the longest time period was waiting for things to dry overnight. Now I just have fifteen more to finish...
Labels: 15mm Ebay Malaya Painting Rapid Fire Singapore Terrain Trees Tutorial WW2