Another thing I picked up at Triples were these Minairons Panzer 1a in 15mm. I wanted them to complete my Panzer family and also just to see what they were like as models. The first thing that struck me (besides the price: £19.99 for five! Not a great deal with five Panthers coming in at the same price for five from PSC!) was the size of the box: 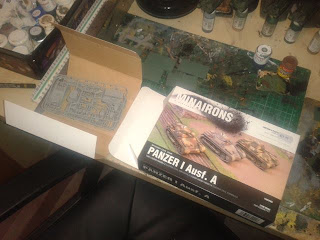 For the size of the tanks, about 2cm by 4cm, it seemed like an awful lot of air was in that box! Having said that, you get a sheet of decals with three different schemes, German, Spanish Civil War and Chinese. Unfortunately, the German decals were too early for my use so I had to use some QRF decals I had kicking about: 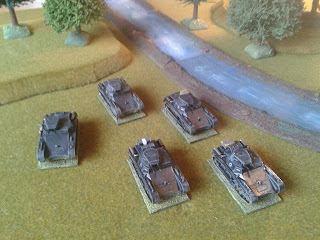 Like with most 1/100 kits, they went together in no time, the only problem being the back plate of the hull, the instructions didn't make it clear which way up it went, so I had to turn to my Light Panzers Osprey book for the reference. 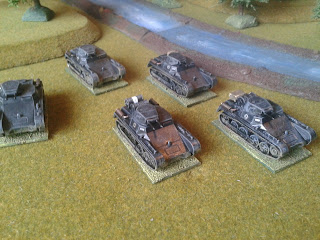 Another criticism was, when compared with other 1/100 tanks by Plastic Soldier Company and Zvezda they were a bit basic in the detailing. Again, for the price, I was expecting a little bit more fine detail. 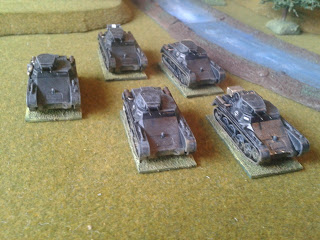 As I said, I have completed my light Panzer marks with these and they will make a nice addition to my early war German forces, five will be enough, especially at the price! I'm not sure if there was any of these running around in Russia '41, but there must have been a couple attached to units here and there.
Labels: 15mm Germans Minairons Product review Rapid Fire Tanks WW2