Having a couple of free hours on Friday night I sat down and finished off these two Stokes Mortars and crew by Peter Pig for my British Square Bashing army. when I say Stokes mortars I actually mean 3" mortars from the PBI range with First War crew as a special pack because PP have yet to release a WW1 British Mortar. At this scale there is very little difference between the two anyway, but I'd like to see a Toffee Apple mortar as well as a Stokes. However, I'd also like to see some British bombers and rifle grenades along with various other things to finish off the Square Bashing range. Ahh, we can't always have everything we want, can we? 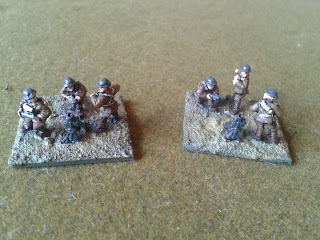 I trimmed the end of the shell that the loaders were carrying to make it look more like a Stokes round. 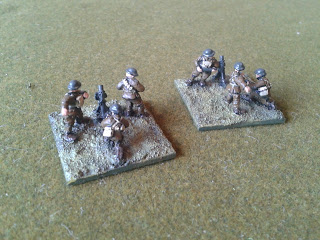