When Peter Pig released the 2nd Edition of Square Bashing they brought about a lot of changes to the original rules. One of the big ones was that the squares are reduced from one foot square, to six inches square. Along with this change the scenery is also reduced to cover one foot by six inches rectangles. With this in mind I set about building some new scenery for the game. I wanted to make a generic ruined village that I could use in Rapid Fire as well, but was mainly inspired by typical World War One scenes such as this postcard of Lens where some of the walls of the buildings are still upstanding despite massive damage: 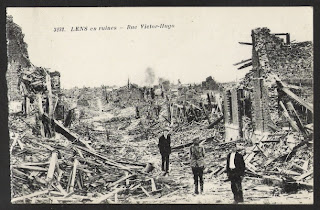 So using some of the left over ruined walls (from Ironclad Miniatures) from the previous ruined village I made, I glued them to a piece of plasticard cut to 12" by 6". 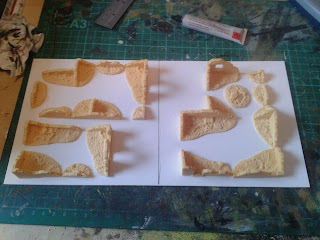 Once they were dry I began to build up the middle of the houses with filler, this will make the sand and rubble go on at the right height and give the impression of a floor level. This doesn't have to be too neat or flat as it will be covered with rubble anyway: 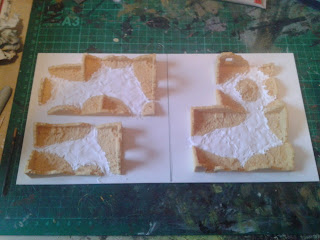 Then the rubble is added. This was a mix I created using sand, railway modeller's ballast and small pebbles which I'd originally sieved out of the builder's sand I use. Instead of layering the different components as I have in the past, this method makes the rubble mix look more realistic, I think. 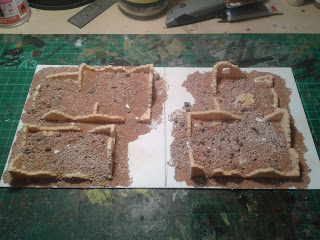 Having said that, it looked like the middle of the houses were a little bare so I added more pebbles to give the impression of large masonry blocks: 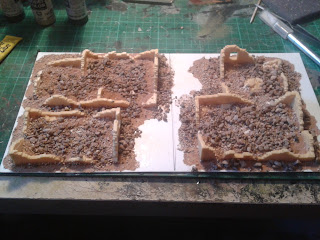 Next step was to put fine sand on the areas that I hadn't put my rubble mix on, so I gave the road and edges a sand layer so the flatness of the plasticard wasn't too obvious. Over the top of this I sprayed thinned down PVA glue from a cheap spray bottle I bought in Wilkinson's. This was to seal the rubble and sand. When this was dry I sprayed the whole thing in brown as an undercoat and also to seal the rubble further, then I block painted the road grey and the ruins in brick red: 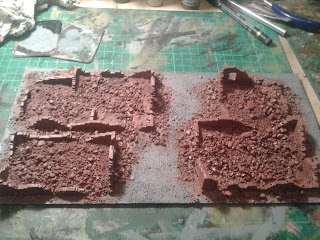 I tried out a few colour combinations on the rubble with dry brushing but nothing really worked, so I painted it brick red again and ink washed the whole thing in flat black: 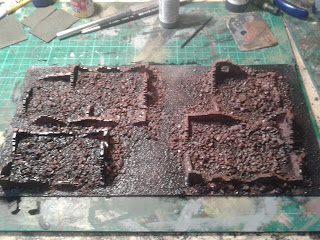 The final stage saw me give the thing a full and heavy drybrush of brick red on the buildings followed by the painting and ink washing of the details like wall plaster and door mantles and window sills and then a medium dry brush of grey over everything to simulate dust and other debris than bricks: 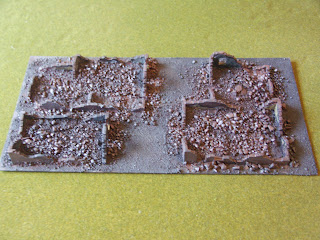 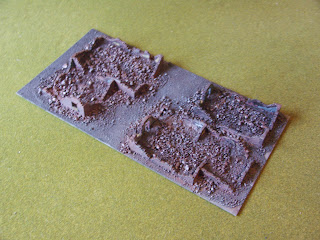 You can see the piece in use during our first game of Square Bashing from Sunday, HERE. I'm pleased with how it turned out and I hope you've enjoyed this build guide! 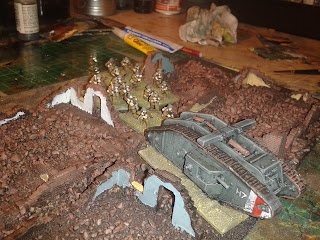 "A tank is walking up the high street of Flers with the British army cheering behind."


PS, Jeff Hanneman the founding member and guitarist of Slayer died yesterday. I have been Slayer fan for over 25 years, this is a loss for Metal and music in general. He died fighting a skin disease and I am genuinely gutted by his death. Although I never knew him, his band and music were a vital part of my life, RIP Jeff: