Whilst I am painting my Plastic Soldier Company T-70s and thought I'd do a quick tutorial on how I paint tank tracks. So, without further-a-do, I shall begin...

In the first picture I have painted the hull of the tank, inkwashed and drybrushed it (Russian Green and drybrushed with RG mixed with White: All the paints I use are Vallejo, unless otherwise stated). The next step then is to paint the tracks in flat black. I have also painted the exhaust in black as this will get the same treatment as the tracks.

I don't mind about being too neat, as any mistakes can be covered up with dust and mud later anyway. 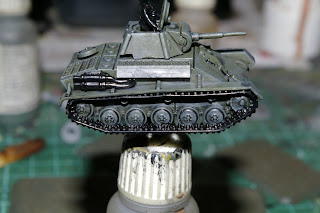 This black is then roughly covered over with Humbrol Matt Rust 113. Again this doesn't have to be neat, and it looks better if some black shows through to give it a rough look. 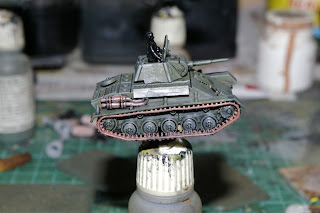 The next stage is to paint Citadel's Bolt Gun Metal over the top of the Matt Rust. This is applied like a heavy drybrush so again that the Rust and Black show through. 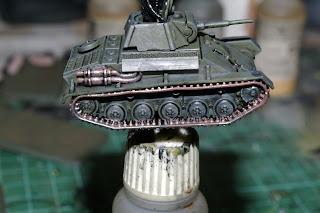 The penultimate thing to do is inkwash the whole track (and exhaust) with thinned down Black: 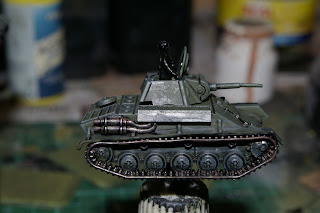 Finally I give parts of the vehicles a dab of thinned down Hull Red for rust effect and drybrush with Khaki for the dust and mud weathering over the tracks. I've also added a patriotic slogan decal, I know these were generally done in chalk and wouldn't have survived to the battlefield, but it adds a nice touch. This is now ready for varnishing and basing: 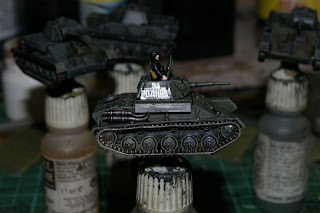 So there it is, my technique for tracks, I hope this was of some help to someone! I'll post pictures of the finished T-70s soon...
Labels: 15mm Painting Plastic Soldier Company Russia Soviet Tanks Work in Progress WW2