Recently a Czech model company,Valom, have released their new 1/144th Sopwith Pup kit. Being an avid player of Wings of Glory/War I thought I'd add to my collection with one of their duo packs. I got it through Rapier Miniatures for £12.00 and this is the kit straight out of the box. You'll notice some parts are photo-etched, the struts and the undercarriage along with the control stick and tail skid: 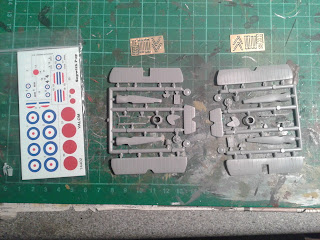 It's by no means an easy kit, being so small, but with some patience, a pair of tweezers and a lot of swearing I managed to get the top wing on OK. I put in the cabine struts by the cockpit last after the wing was fixed to the four outer struts. The pilot is one from Peter Pig's range of 1/144th aircrew as the Valom kit isn't supplied with one. 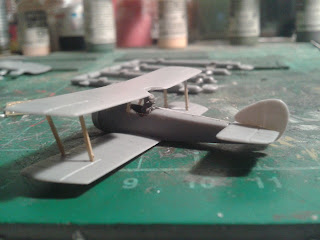 The wheels and landing struts went on pretty easily as well, I am dreading the next one as I'm sure this luck can't last... Here it is complete, but unpainted. 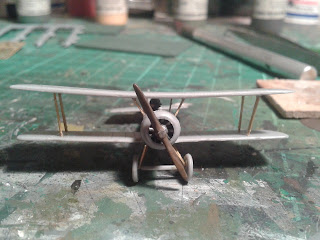 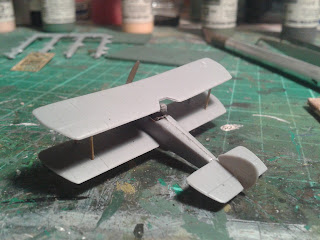 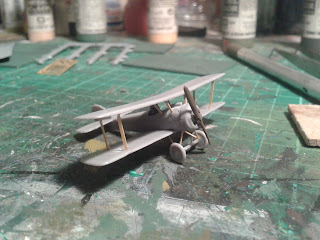 There are several schemes for the aircraft, including a Imperial Japanese Airforce Scheme (!), but I chose the simplest, a British scheme from 1917. I am in the middle of researching further markings on Pups (if anyone can direct me to any websites, please leave a link below!). 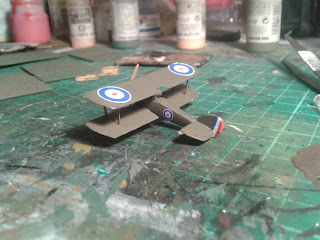 The tailplane was hand painted as I didn't trim the decal down enough and it looked messy. I used the following Vallejo colours for the paint: Brown Violet for the upper surfaces, Iraqui Sand for the underside and Beige Brown for the wood. 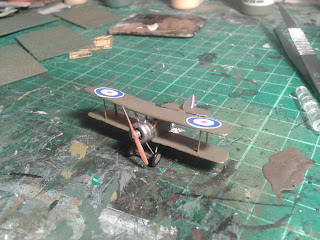 I am also in two minds as the whether to give the aircraft a wash of ink. The official Wings of Glory models are not shaded, so it may stand out if I do. 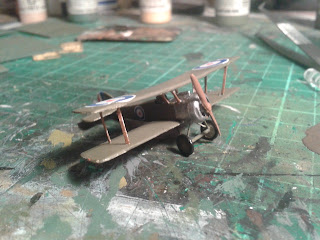 All in all it's a nice little kit that will look good in the rest of my collection. It wasn't as tricky as I thought to build, but I have a bit of experience in building 1/72nd scale biplanes, so maybe that helped. It's certainly not a starter kit though! A little tip is to actually paint the model in its base colours while it is still on the sprue as painting it after it is built gets a bit tricky being so small, then all you need to do is touch it up and detail it.

It's great to see that someone is producing 1/144th scale WW1 kits, maybe it will give other manufacturers the nudge! I'm surprised that Valom chose to release a Sopwith Pup first, I would have thought they would have gone with a more popular design, maybe an SE5A or a Camel. I guess they are filling the gap in the market left by the WoW miniatures, but having said that, the next release is a Fokker DVII, which is already available in the WoW line. I'll probably get a box of those as well, some decals from Dom's Decals and start on a full Jasta!

I give this an 8 out of 10!
Labels: 1/144th Aircraft Model kits Product review Valom Wings of Glory Wings of War WW1