Zvezda keep releasing new 1/100th scale tanks and I am finding it hard to keep up with their output! However, I grabbed myself five of their Matilda II sets with the intention of painting them as Soviet lend-lease vehicles, to add further flavour to my Russian forces. That's one of the best things about wargaming the Eastern Front, pretty much everything and anything can be used! Normally with lend-lease vehicles I like to add patriotic slogans to give them the Russian feel, but this time I decided that bits and pieces of Russian stowage, like the fuel drums from T-34s, would suffice to make it apparent that they are not in British service. 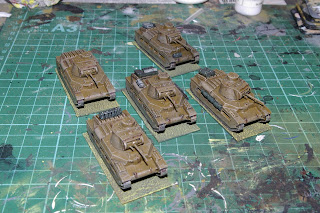 With some advice from the chaps at TMP, I painted the colour scheme in the original British brown as the Russians probably had better things to bother themselves with than respraying shipments of new vehicles! 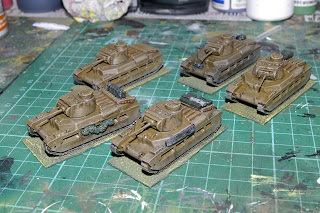 As with most of Zvezda's kits (except their trucks...) the vehicles go together really well, they have nice clean detail lines and are a pleasure to paint! The stowage is a combination of Battlefront, PSC and Command Decision. Another short post to keep you up to date with the stuff that's coming off my painting table, so thanks for looking!
Labels: 15mm British Soviet Tanks WW2 Zvezda