It would appear that Square Bashing is quite popular, judging by the reactions to my last postings. I play the original First Edition of the game but have just learned about the release of the 2012 Second Edition, which I have now ordered and is winging its way to me as I type. Reading a little bit about 2nd Edition it would appear that a few rules have changed, some of which my opponent had actually discussed with me whilst playing 1st Edition. It remains to be seen how well the game plays now, as we only had a few niggles about the original game anyway and thoroughly enjoyed playing it, but hopefully all the changes are for the good. 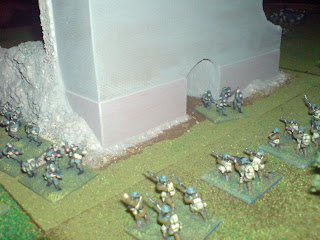 Anyway, enough waffling from me, this post is about the casualty/morale markers that I use in Square Bashing. During play the morale of a unit is indicated by the amount of casualty figures in a square, between one and three, depending on the severity of the damage taken. I thought it would be nice to use Peter Pig's casualties figures in small vignettes as markers. The game is quite abstract so I thought these markers would add to that overall feel anyway. These were pretty simple to knock up. A square of plastic card smothered in Tetrion and with between one and three figures glued down: 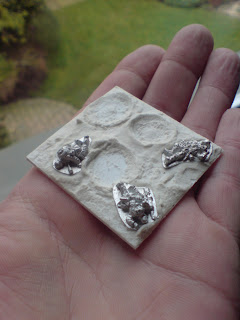 I pressed a thumb into the wet Tetrion to create the shell craters. This was to make the morale level even more obvious than just the figures, you'll notice that the shell craters are equal to the number of casualties: 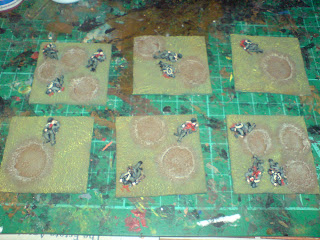 A quick and simple way of making a morale marker. I promise, I do game other periods as well as World War One, so keep tuned for some World War Two gaming bits and pieces next time. Also if you are reading this and have a wargaming blog, let me know and I will put it in the links on the right!
Labels: 15mm Peter Pig Square Bashing Terrain WW1