Force Morale Markers and Other Tokens

A little while ago I saw a company on Twitter called Sabotag3d and they sell 3D printed gaming accessories. One of things they sell are some Chain of Command Force Morale trackers. They also had an offer on for 10% off, so I bought two. 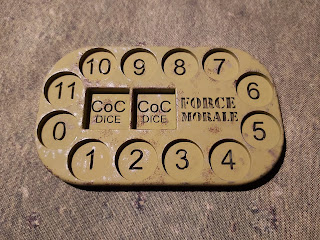 They are printed in blue resin (I think), so I gave them a lick of paint. I painted one in Middlestone and the other in Khaki. I did think about doing a camouflage pattern on the Middlestone one, but I thought that would be too German World War Two specific, so I left it as it was. The Khaki one was originally painted in Russian Green, but this was too dark to see the numbers. 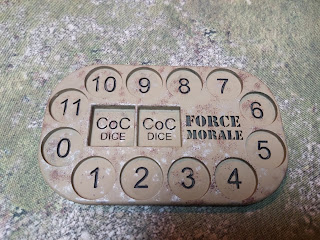 Finally, I added some weathering in the form of chipping with Bolt Gun Metal and then Typhus Corrosion using a ripped up sponge. The circles are big enough to hold a penny and the dice holders fit the Too Fat Lardies' CoC large dice.

I also ordered some of the other tokens, these are generic tokens and can be used in both CoC and I Ain't Been Shot, Mum. The first ones are for Tactical movement. 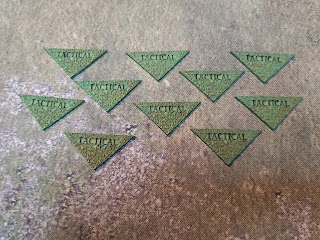 And these are for units on Overwatch. These were simply painted with Intermediate Green, inkwashed in Flat Earth and drybrushed in Yellow. The letters were picked out with black ink. 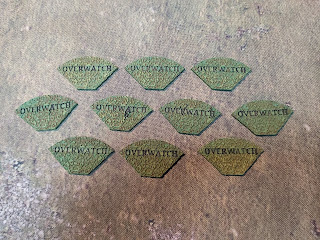 These pieces are very nice and will be a great help in games. It's well worth throwing a few quid at Sabotag3d for them.

Speaking of IABSM, I recently posted a 'how to play' video of the rules, here is part one (of three, coming soon) that covers the basics needed to play and some of the game concepts. Please have a watch and subscribe!