Resisting the draw of the jungle can only last so long and as I am trying to organise my British and Indian forces for Malaya, I turned away from Mega City One and back to the fetid monkey infested jungles of the Far East. I put in an order over Christmas for two Lanchester armoured cars by QRF. Unfortunately, I put this order in two days before their January sale and didn't benefit from a discount! I'll hold my horses next time... 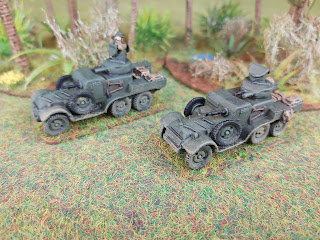 They were simple enough to paint, and I added some stowage just to break them up a bit. I also used a Plastic Soldier Company commander figure to stick out of the top turret on one of the vehicles. As with a lot of QRF vehicles, they can be a bit of a pain to put together. I had to make a small front axle out of plasticard so that the front wheels would sit properly. But that aside, I think they are OK models. 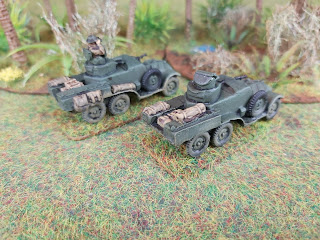 These two will add a little bit of support to the British and Indians, although they have no anti-tank capabilities, they should give the Japanese infantry a run for their money!

Meanwhile, on the Storm of Steel Wargaming channel on Youtube, here is a new video looking at my Anglo-Allied 6mm Army. I did a video recently on Napoleon's Armee du Nord and this is a sister video for that one. Check it out below and please subscribe to the channel!