Another addition to Napoleon's Reserve Cavalry Corps is the 9th Cavalry Division, commanded by Général de Division Baron Jean Baptiste Alexandre Strolz. This was made up of four regiments of Dragoons, the 5th, 13th, 15th and 20th. All resplendent in their green uniforms! 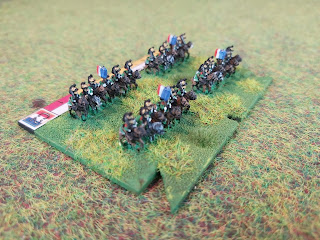 On the 15th of June 1815, this division, along with the 10th Division pursued the Prussian rearguard at Gilly, then held the right flank at the Battle of Ligny. On the 17th, they scouted out the Prussian positions and reported their location. Although they were present at the Battle of Wavre, they had little impact on the fighting. 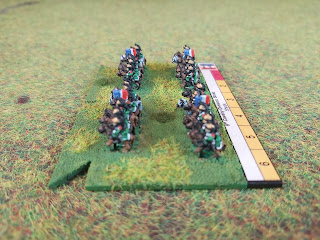 After the Waterloo campaign had finished the unit was involved in one of the last actions of the Napoleonic wars, the Battle of Rocquencourt on the 1st of July where they successfully wrecked Prussian cavalry formations. 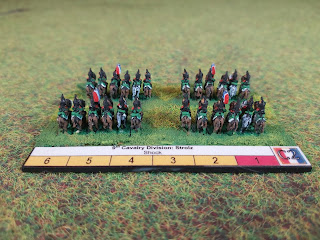 
The information for this post came from Mark Adkin's Waterloo Companion and John Franklin's Waterloo (2) Ligny & Waterloo (3) Mont St Jean and Wavre by Osprey (Amazon affiliate links).
Recently, I was invited along to Steel Lard, the Too Fat Lardies games event in Sheffield. It was a great chance to try out some of the Lardies' rules, including Chain of Command, Kiss Me Hardy and Algenon Pulls It Off. They were great games and I made a video of the day. Check it out here: