It never felt like I would get here, but this is the penultimate French infantry brigade that I need to paint for the Army Du Nord in 1815. It is the 1st Brigade of 20th Division, commanded by Baron Jean Baptiste Jeanin. 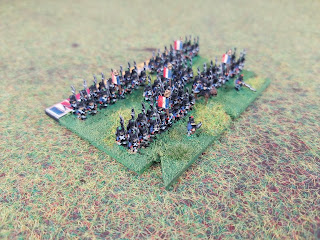 The 20th Division was the weakest of Napoleon's army in Belgium, with 3,300 men in one and a half brigades. For that reason the two brigades have been amalgamated into one base. In game terms it means that it is 'overstrength'. 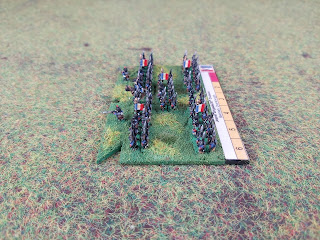 The units within the Division are the 5th Light, 10th Light and the 107th Line regiments. It arrived late at Ligny and then was initially in reserve at Waterloo behind the centre of the French line. In the afternoon it was moved to the French right to attempt to stem the flow of the Prussian arrival and fought a spirited delaying action at Plancenoit. 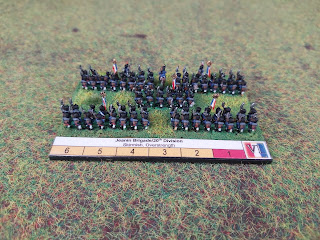 Now there is only one more infantry base to paint for the entire French Armee du Nord in 1815! Amazing!

And finally, today I attended Steel Lard in Sheffield, the Too Fat Lardies games day. It was an excellent chance to play some great games. I recorded the show, but need to edit the video. I also got my hands on a promo box of the forthcoming Judge Dredd Miniatures game from Warlord Games. I've put together a video which takes a look at the promo material and gives you an idea of what to expect from the final product: