It has literally been years since we last played a scenario in the Malaya Campaign, so recently we tackled the next engagement in the Japanese advance down the Malayan Peninsular. The Battle of Gemas was fought on the 14th of January 1942 around the bridge over the Gemencheh river. Australian soldiers of the 2/30th Battalion ambushed a Japanese force from the 5th Infantry Division and killed or wounded around 1,000 Japanese soldiers in a twenty minute attack. The scenario was centred on the top right of the map below, with the bridge being in the centre of the table. 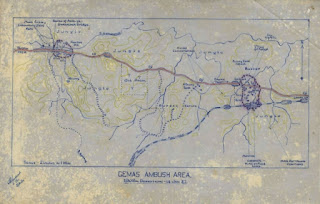 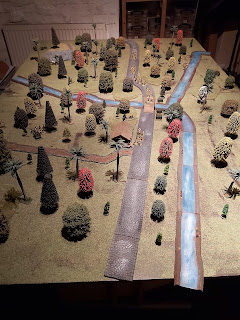 The Japanese had begun to cross the bridge, which had been previously set with explosives by the Australians. 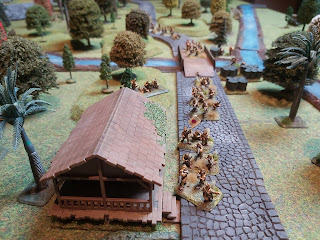 Strung out in a line as their vanguard pushed forward, the Japanese were unprepared for an attack. 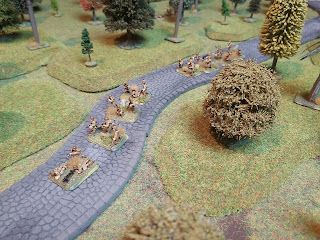 Meanwhile, in the jungle the Australians waited for the time to strike. 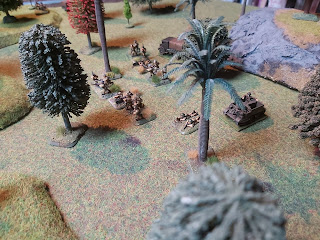 Using the jungle tracks an Australian carrier appeared and began firing at the Japanese engineers setting up the supply dumps at the bridge. 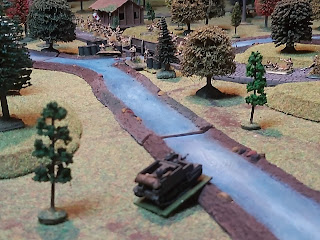 Suddenly the bridge was demolished in a massive plume of smoke and flame! 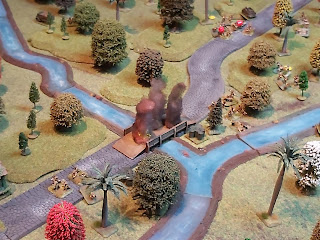 The Japanese units east of the bridge come under fire from Australian units on either side of the road. 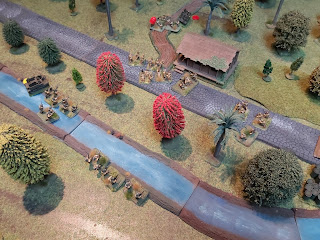 Meanwhile, two Japanese companies are almost wiped out to the west of the destroyed bridge. 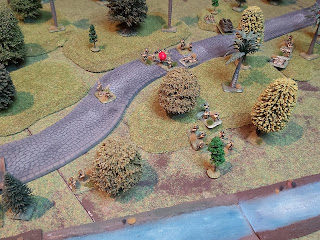 Japanese infantry flee off the table to the east, whilst their centre holds against Australian attacks. Meanwhile, Australian support begins moving down the road. 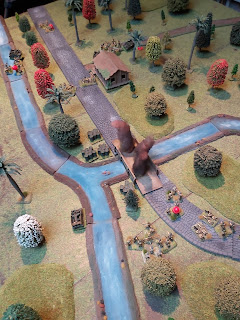 The final Japanese defenders try to hold out in the small building, but fire from the universal carrier and Australian infantry whittle down their numbers. 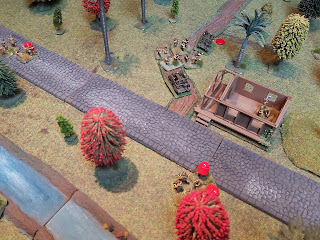 On the other side of the bridge, the Australians destroyed the remaining Japanese defenders and began their advance across the river. 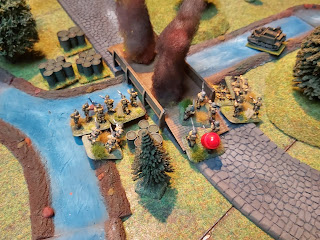 The game was over, with a total wipe out of the Japanese defenders, either through casualties or morale collapse. The Australians only lost a handful of infantry, so the game was a complete victory, pretty similar to the historical outcome. This was the first Malaya game for a while, but it was nice to have an Allied victory for once, the previous games having been Japanese roll overs. The Australians withdrew across the Muar river after heavy fighting on the 15th for the next and last major engagement on the Malaya peninsular at the Battle of Muar.

This blog has been a bit slow for the last month or so, but that is because I have been working away and then my wife was home from Vienna for a week and a half, so my attention has been elsewhere. However, I will pick up again in the next few weeks! Please subscribe to it, if you haven't already and enjoy this playthrough of the PC version of The Great War, it will give you an idea of how the board game version plays:


And here is the Battle of Gemas AAR as a video: