Back at Partizan, I picked up some Zvezda SU-76s in 1/100th scale. I wanted the Plastic Soldier Company ones, but they didn't have any when I went to their stand at Salute. Fortunately, I was able to find some Zvezda models instead and as I only have a couple of models of these ubiquitous Soviet SP guns, I felt like boosting their numbers a little. We used these recently during a big tank game we had, and here's a closer look at them. 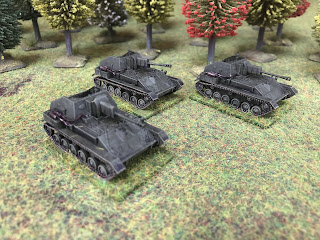 The only issue with the otherwise excellent model is that they lack crew. As the vehicles are open top this is quite an oversight and I will be putting some crew members in them in time. I've often wondered why Zvezda aren't producing their own 1/100th scale figures to go with their vehicle range, but I guess they already have the 1/72nd figures in production. 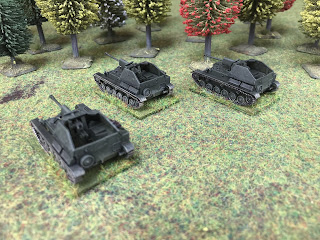 As with all Soviet vehicles, these were pretty easy to paint, Russian Green and a wash and highlight, then detailing. They didn't take long to finish off and make a welcome addition to the Soviet armoured might!

One of the reasons that this blog has been a bit quiet over the last month was because for a week in June I was in Bullecourt helping to excavate the First World War site that Australians fought over in 1917. The official dig photos have been released and you can see them by following this link: https://photos.app.goo.gl/maJgDMyPGZf4yzRh9

Speaking of Soviet armoured might, please take a look at this Storm of Steel video about the battle of Prokhorovka, (and please subscribe!) fought during the German offensive at Kursk in 1943: