Along with the recent release of the rules for Landships, (click here to see a review of the rules) Voxelhouse also released the .stl files for 3D printing the minis for the games. As I don't have a printer, Manoel very kindly sent me printed versions and this is a review of them.Here we have the Human Frog light tank, Storm Landship and the Sledgehammer tank (L-R) 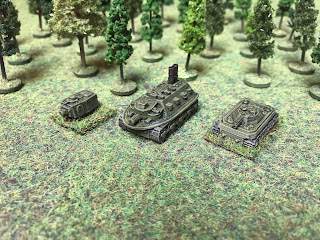 They arrived safely and unfortunately I was away for most of June so I only recently got a chance to paint the models. The ones above are the human faction, I painted these in a base coat of Vallejo Khaki and then used Militarum Green Citadel Contrast Paints. I then highlighted them with a light green shade (I forget which one...). The Orcs below (Avalanche heavy tank, Logu Landship and Arbeiter light tank (L-R)) were painted in Vallejo Neutral Grey then inkwashed in black and drybrushed. OK, so I've described how I painted them, but what about the models themselves? 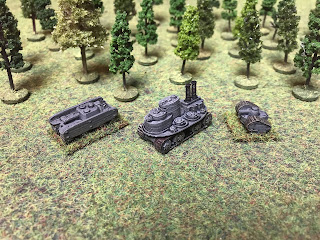 As you can see they are 6mm and quite a bit of detail on them. However, the printing process has left the models a little grainy. That doesn't matter so much in this case as the lines can be explained away as part of the steam punk aesthetic and from wargaming distance (at least an arm's length) are barely noticeable. I think there are probably different materials for 3D printers that smooth out the process and there are also other methods that you can use to fill in the lines. I just didn't do this!

Looking beyond the printing, the models are excellent pieces, full of imagination and have obvious influence from First and Second World War tanks and naval vehicles. Like these Orc and Human artillery bases. Here are the infantry figures for both sides. These are not particularly detailed and there isn't much to differentiate the two sides apart from the number of figures on the base (human four, Orc five). But again, this is not a great issue as they are supposed to be seen from arm's length on the table. 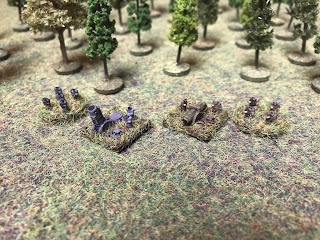 And finally, we have the big boys, in the shape of the Human "General Robinson" Mech on the right and the Orc "Tin Boy" Mech on the left with a group of infantry for scale. Here the printed lines are a bit more defined, but with a bit of work you could easily reduce them. As I mentioned before, the lines actually add to the steam punk feel of the figures anyway. 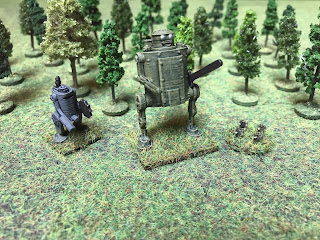 So there's the basic units for the game Landships. These can currently be bought as .stl files from Voxelhouse as part of the basic game bundle for a paltry $21.99! The bundle also includes rulers and artillery burst markers along with some other bits and pieces. I also note that Voxelhouse are currently working on new designs for the game, check up their progress over on their Twitter feed!

In other news, I went to the Flying Legends show at Duxford at the weekend. Here is a video of some of the aircraft, including a formation of twelve Spitfires! Watch the video here and please subscribe to the channel!