Long term readers my remember that in distant past I had a 15mm Star Wars project going on. This was long before Legion was released and turned my head. I had a set of Blue Moon Miniatures Aquans as stand ins for Rodians (the Greedo character in Star Wars) that have been sat in a box for about five years. Coincidentally, Games Workshop have just released their new range of Contrast Paints. So, this was a perfect chance to try out the new paints and finish the figures. 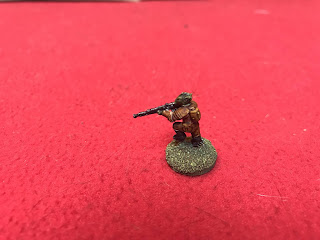 I went over to my local GeeDub and bought three paints (hellaexpensive they were too!). I got Snakebite Leather, Gulliman Flesh and Militarum Green as thought these would be the best for my needs. First of all, I painted the figures in a light grey undercoat as instructed by GW and started with the new paints. I used the Gulliman Flesh as the basic uniform, the Militarum Green for the skin and the SnakeBite Leather for the equipment. The black boots were painted with my usual paints, as were the weapons. 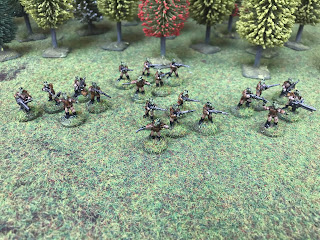 The first thing that was noticeable was that the painting was very fast, the colours flowed well and I quickly block coloured all the figures in no time. As this was an experiment I have not bothered to do any further work on the figures. For 15mm figures, I think the paints work quite well, but essentially they are thick ink washes that give a slight depth to the details on the figures. 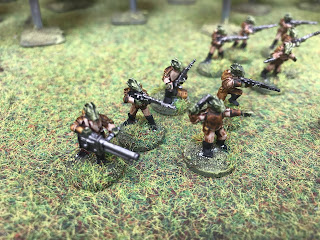 Are they as ground breaking as some people are making out? Not really. They may speed up painting initially, but there is still a bit of room for touching up and highlighting. I think these would probably be better used these as an ink wash over a light base shade. For an absolute novice painter, then these are good for getting a semi-decent painted army on the table very quickly, but for those of us who have painted for a while, there's not much here that is particularly ground breaking. Painting is still a long process and short-cuts don't always do what they say on the tin. 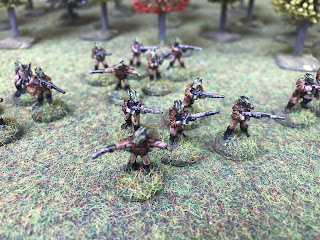 That said, for 15mm figures which will only be seen from a couple of feet away they are not too bad. They are quick and easy and worth experimenting with, especially using different base colours as an ink wash.
Labels: 15mm Aliens Games Workshop Painting Product review Star Wars